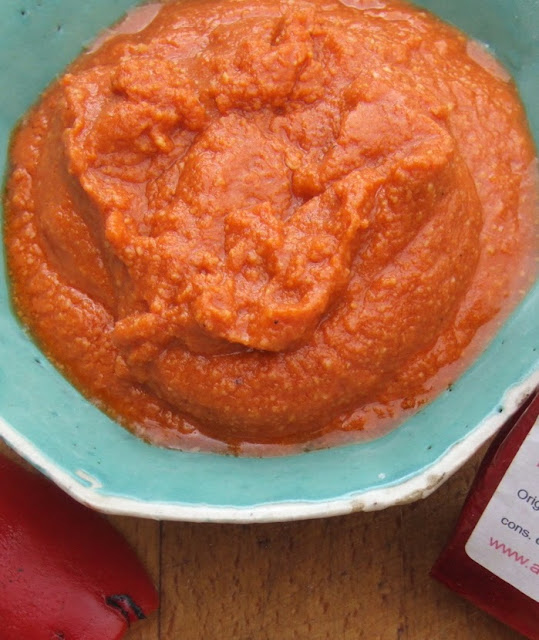 The colour as you can see is just outrageous,like ketchup only sexier
A profusion of red peppers in summer paves the way for a larder shelf of pastes and pestos in winter. By preserving your harvest of summer fruit and vegetables you can then enjoy it through the winter months and beyond.Storing your harvest is a great way to deal with a surplus of one particular vegetable and provide fuel for the lean months when little is growing.
Roasted pastes are a great way to use summer's bounty.In Portugal, we have Massa de pimentão, a paste made by salt curing red peppers.This classic Portuguese staple in the family of romescos and harissas  is traditionally made by dry-brining strips of pepper in salt for several days, then mashing them up with garlic and sometimes other spices.The massed produced bottled variety of this paste, made from peppers grown in the fields of the Ribatejo and Alentejo, can be found on supermarket shelves, but this pales in comparison to the vibrant colour and flavour of a home made version and the labours of love that have been bestowed upon its production.Every Portuguese cook has his or her own version,some made from fresh red peppers,others from roasted peppers and still others from paprika.The difference between this and the classic Romesco sauce which originates from Tarragona in North Eastern Spain is that the Portuguese paste does not include the combination with ground almonds and bread.
In Portugal, the sauce is strictly used as a marinade,so bathe chicken, a pork shoulder or some robust fish like octopus or squid in it overnight, then grill or roast it up. But others like me might have different ideas. Use it as a dip for crudités or a spread for bruschetta, a sauce for grilled fish, a topping for pizza or as an alternative emusion to mayo in sandwiches.
My desire as always was to follow the traditional route of the Portuguese avô (grandmother).The process would not allow me to see what I had produced for six days.My impatience to see the result got the better of me and caused me to default on the process.I took a leaf out of the book "The food of Portugal" by Jean Anderson.Her shortcut involves an especially exciting riff on the slow-roasted pepper.
She coaxes the riches out of red peppers by stepping aside from the griddle and burner and allows the oven do its magic. When a recipes tells us to roast and peel a pepper,the caveman comes out in us and the poor wretched legume doesn´t stand a chance.We char it directly on a stove top griddle pan.It's fast and furious and vaguely dangerous, and when else in our modern lives do we get such a thrill from sticking food directly in fire and watch it burn?
But while it may be the more thrilling method, it is not the most delicious. The pepper lingers in the flames just long enough for the skin to burn and flake off, but stays close to raw inside. So it holds its shape well but when you seal it in a bag to sweat the skin off you end up with a bag of red water which literally drowns the peppers flavour.
A salt-cure followed by slow comfortable roast cooks the pepper until it collapses into a soft heap and the skin turns to paper.First you carve peppers into chubby strips, then layer them with salt and leave them out overnight. When you wake up, you'll come back to find them lying in a pool of salty water, looking dewy and relaxed. Through the wonders of osmosis, the salt has slowly but surely pulled a healthy amount of water out of the peppers, like a mini veggie spa treatment.
After the roasting the flesh is intense and sweet much like what aged balsamic is to bog standard old vinegar.So bearing all this in mind I applied this bit of modern ingenuity to the traditional massa de pimentão.
Massa de pimentao
Makes about 11/4 cups
This is salty so use a judicious hand in its application

8 medium sweet red peppers, washed, cored, seeded and cut lengthwise into  chubby strips about 1" wide 2 tablespoons Flor de sal 4 large garlic cloves,unpeeled and kept whole 1/3 cup olive oil (about)
Arrange a layer of pepper strips in the bottom of a shallow bowl no more than 23cm (9n inches) in diameter; sprinkle with 3/4 teaspoon of the salt; now add  the rest of the pepper strips in layers, sprinkling each with 3/4 teaspoon salt. Let stand uncovered at room temperature for at least 12 hours. Drain off excess liquid. Turn on the oven to its keep warm-setting (250º to 275º F.). Place the bowl of peppers, still uncoveredwith the garlic in the oven and roast 3 to 3 1/2 hours, stirring occasionally, until all juices have been absorbed, the peppers are soft, and the skin pulls away easily from the flesh. If you start to notice them drying out, cover them with foil for the remainder of the time. Remove and cool to room temperature. Now peel the skin from each pepper strip and discard. Squeeze the flesh from the garlic and discard the skin.Put the garlic and the pepper strips in the work bowl of a food processor fitted with the metal blade, or in an electric blender cup, and add about half of the oil; buzz nonstop about 30 seconds, scrape down the sides, and buzz 30 seconds more. With the motor running, drizzle in enough of the remaining oil to make a paste slightly softer than whipped butter. Churn 60 seconds until absolutely smooth.
Note: If you have neither food processor nor blender, you'll have to grind the garlic and peppers to paste as the Portuguese avôs would do do--with a mortar and pestle. You must then add the olive oil very slowly, drop by drop at first, beating hard to incorporate.
Transfer to a small jar with a tight-fitting lid and store in the refrigerator. Allow to come to room temperature before serving

Don't get impatient and haul them out of the oven too soon.(there are other exciting things to crank the heat up for  just you wait!). Cook them through and through, or you'll have teeny but perceptible shreds of pepper marring your puree. The bits don't really cause any trouble, but this sauce is best when it's ketchup smooth.