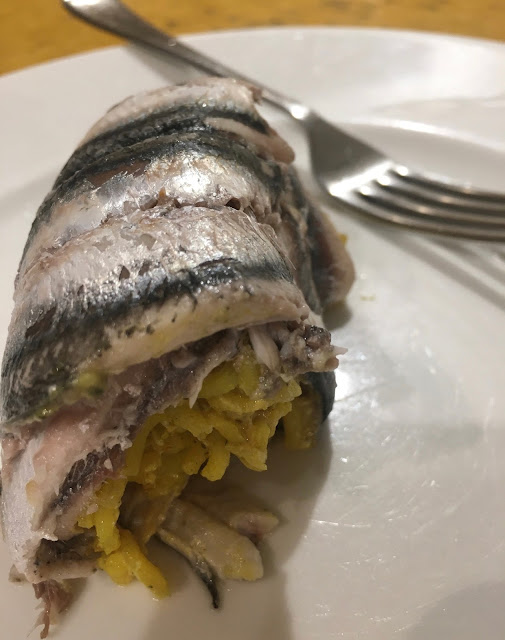 Pilau is one of the worlds oldest, most intriguing dishes: Indian, Iranian, Turkish and Russian varieties, possibly emerging as the forerunner of the paella in Moorish Valencia.Could it be a worthwhile project to hold a festival of such dishes, in which Spanish Catholics, Russian Orthodox, Turkish Sufis, Iranian Shia, Pashto Sunni and Indian Hindus could all meet to eat rice together and swap recipes?
I’m always in the mood for rice. Any kind will do: Carolinho rice, boiled and buttered; steamed jasmine rice; basmati rice in any guise; nutty brown, red or black rice; short-grained sticky malandrinho rice. You can tempt me with a plate of, risotto, paella or biryani. I’ll travel miles for fried rice, or Portuguese coconut rice pudding for that matter.

There are times when a simple pot of freshly cooked rice is the perfect accompaniment to a meal. On other occasions, a rice dish can be the main event. Pilaf (it goes by other names, like pilav, plov and pulao) falls into this category. Pilaf usually involves simmering rice with onions, aromatics and broth to amplify flavour and nutrients. First of all we have to get one thing straight.It is schmazing how the understandable errors made by westerners are never corrected by Indian or other south Asians. And then the natives in South Asia start adopting the corrupted spellings themselves.It's not pilau, it's pulao,or is it matar pulau, just like there is no poppadum but pappar. In India, for sure it’s Pulao.
In the Middle East, it’s Pilau. Especially places like Afghanistan, where the veggie version is called Subz Pilau, and in India the same thing is called Sabzi Pulao. Sabzi = vegetable. Pulao/pilau = spiced riced preparation.
Whichever name one uses (and I’ve never heard of any Indian or seen any Indian restaurant menu calling it anything other than Pulao, maybe people of Indian origin in countries elsewhere adopt that name)While we are having this heated debate why don't we bring in the word "PILAFF" which my faithful old concise Compact OED says is a "Oriental dish of rice or wheat with meat, spices, etc. from the Turkish "pilau" (with an accent over the "a"). The autocorrect offers "pilaf" for "pilau", unless we use the original script of the people who make the dish (Hindi. Parsi, Kurdish, Turkish to name a few), we are going to have these naming problems. Does this matter! Lets just eat and enjoy.
This dish came to me by way of Nigel Slater´s Tv series Nigel Slater's Middle East in which he explores the region, cooking and eating with the people of Lebanon, Turkey and Iran, as he discovers the secrets of the world's oldest cuisines.
Hamsili pilav (anchovy pilav) is normally presented on the table as one large centrepiece for everyone to take a slice from. However, there’s just the two of us in our household and as I was making it a light supper dish I decided to make it in a small ring mold. Obviously I could not get authentic hamsi here in the Algarve,but we both love anchovies and there are plenty of substitutes in the market. 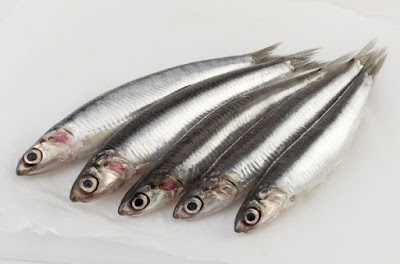 I opted for biquerao (boquerones). The fish from which canned "anchovy" is made is, in fact, the biquerao. The confusion of names arises from the term given to the process of working the fish for fillets: "anchovar", the slightly larger petingas (baby sardines ) might be an interesting spin, as might peixe rei (whitebait) The finger sized tiny fish that is mostly caught in The Black Sea is called “hamsi” in Turkish. It may be small and unremarkable. “Little prince” of fishes, the turkish locals call it ,maybe the king of fish cakes I say. If anchovies scare you, they have never scared me, but I do know that  my life would have been poorer if I had not  been cooking with them all along. Don't make the same mistake! 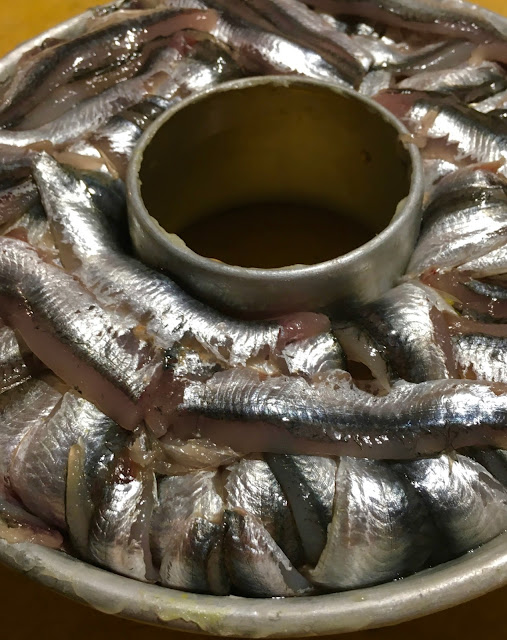 Hamsili pilav (fresh anchovies and rice)
Turkish pilav, made with basmati rice and spices, can be enjoyed as a satisfying vegetarian main or as a glorious stuffing to a dish like this.

The pilav takes around 40 mins to prepare and cook, but you can let it cook for 30 mins while you prepare the rest of the dish.I made the dish precisely following the original recipe but we were a little disappointed with the end product.The overall taste was a little bland.I have been experimenting with the pilau and although not true to an authentic pilau I have added tomato, chilli and fresh coriander to the original recipe and suddenly the whole dish came alive.

1tsp cumin seeds
1tbsp butter or oil
1 onion, peeled and chopped
4 cardamom pods
4 cloves
1tbsp turmeric
250g basmati rice
2 bay leaves
handful of dried mint leaves
1-2 cinnamon sticks, broken
Heat a large pan, which has a tight-fitting lid. Sprinkle the cumin seeds over the base and cook for 30 secs, stirring well to toast them but taking care not to burn them. Tip out of the pan into a bowl.
Heat the ghee or oil in the pan. Add the onion and cook it over a medium heat for 5-7 mins, until it starts to soften.
Crush the cumin seeds lightly with the cardamom pods.
Add the cumin, cardamom, cloves and turmeric to the pan and cook for 1-2 mins.
Rinse the rice well and add to the pan, along with 450ml boiling water, the bay leaves and cinnamon sticks and stir briefly just to mix. Bring the mixture to the boil, cover the pan and cook over a low heat for 12-15 mins, until the water is absorbed. Leave the rice in the pan but off the heat for a few mins before using.
The rice may be prepared in advance. Make sure that it’s cooled very quickly after the initial cooking and then kept refrigerated. To serve, reheat thoroughly. 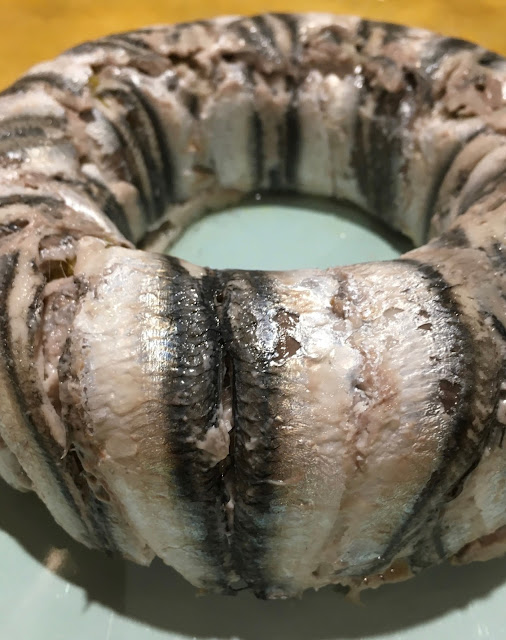 Fillet Your Anchovies
Simply make a slit along the stomach and run your thumb nails under the bone. It removes easily. (If you don’t want your hands to smell of fish, hygiene gloves might be the way forward.)
To prepare and cook
Preheat your oven to 180 degrees (150 for a fan oven).
Whilst your pilaf is cooking take an oven proof dish and grease the base and edges liberally with butter.
Now cover the base and edges with 1 layer of your anchovy fillets with the skin side down, against the bowl. If you are using a circular or dome-shaped bowl, you can layer your anchovies in circular patterns if you like.
Keep placing the anchovy fillets until you have no gaps.
Give your pilaf a stir and start to place it into your anchovy casing.
Once you reach the top of your bowl, if you have any anchovy fillets protruding, fold them all inwards towards the centre.
Now cover the top of your rice with more anchovies, too, so that your pilaf is completely encased.
Drizzle a little olive oil over the top of your hamsili pilaf and place in the oven.
After 20-25 minutes, remove your hamsili pilav from the oven and serve.
If you have used a shallow oven dish, you can serve in slices as you would a pie, straight from the dish.
If you want to present your hamsili pilav as a centrepiece, place an inverted serving plate over the top of your hamsili pilav. With one hand on top of the plate and the other under your oven dish, turn them over so that your hamsili pilaf is now upside down on your serving plate.
Tap around the dish and then carefully remove to reveal your hamsili pilav.
Garnish with fresh lemon slices and parsley.
Email Post