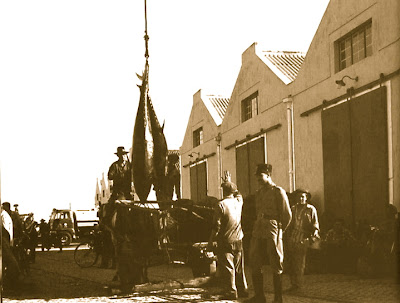 The Arabs developed the technique and the peoples of southern Iberia have adopted it. Muxama de atum, Musama , Mojama and Mosciame, according to where you live, has become a signature to fine

dining the world over.


So lean and full of flavour, like Serrano ham, it is no wonder it sometimes gets called ham of the sea. Just served as tapas with a drizzle of olive oil and chopped tomatoes,as the Spanish do it, its concentrated taste can overwhelm at first and make your beer taste of tuna - not a good thing, but persevere and before long you will have an "Atum heart mother"

This tuna, is fished in the Azores and then cured under the signature of Senor Damaso and his family in Vila Real de St. Antonio.
The word means dry in Arabic and the process involves preservation in salt, followed by drying.The process is followed according to Arab heritage, with a small change. It is the same recipe that Phoenicians and Romans used for over 2000 years, to make their mosciame.
Muxama in the past was air dried and made in the summer when the weather is dry. Today, with state of the art technology and hygienic conditions the technique can be applied indoors.
The tuna are placed , covered in containers of salt for 24 hours.
They are then washed and dried in a humidity of 60 percent, and a temperature of 14 º C.
It makes perfect and uniform drying conditions, and can slightly reduce the percentage of salt, because salt with controlled humidity will have less water content.
After 10 or 12 days depending on the thickness, the muxama is ready to consume.
It is used as an appetizer, cut into thin slices. It has a strong but pleasant taste. Best sliced super thin and served with olive oil and fresh parsley. 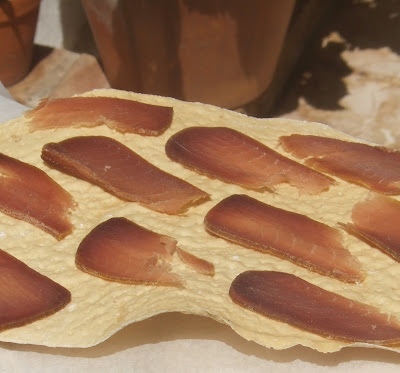 If you are dining at Casa Rosada, here in El-al gharb you will find it served as a starter for two Iberian style on Reganas!
Reganas What? Crunchy munchy dippy doo dahs all the way from Spanish Spain. Crispy crackers baked for a right proper mouthy crunch. Snap a bit off, get munching and pass it on. Saude! 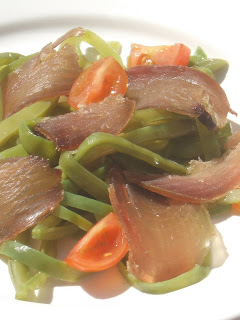 Our other way of serving this noble tuna is a forged version of Giorgio Locatellis signature.

First make the tomato vinaigrette by blending the tomatoes with the oil, then combining them with the wine vinegar. Toss the beans in the dressing and put in a heap in the centre of each plate. lay the slices of muxama on top. Add a squeeze of lemon juice and dribble more dressing round the plate.

NOTE: although similar to the well known Italian Bottarga, Bottarga is fish roe, this is dried tuna fillets.
Email Post