"For christ and spices" 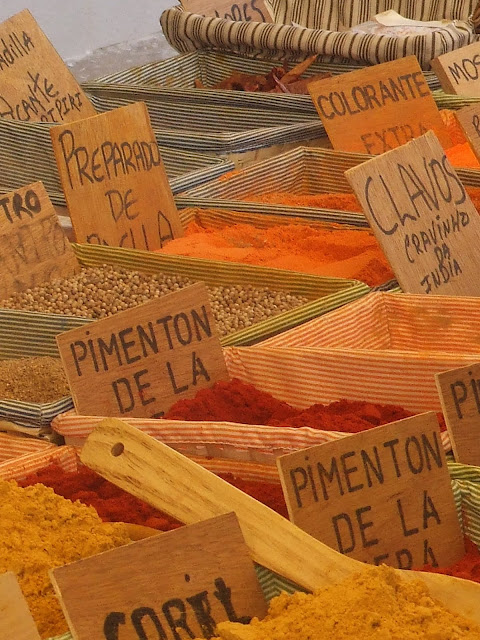 Having set foot on South Indian soils,on the dawn of May 21st 1498,
Vasco de Gama shouted:
"For Christ and spices"

Having loaded up with spices De Gama returned to Portugal and finally reached Lisbon on the 9th November 1499. It wasn´t just a journey of discovery into one of the world’s oldest industries, but a lesson in colonial culture clashes, exploration and global trading. The ingredients in our kitchen cupboards have destroyed empires, made fortunes, cost lives and changed not only the course of history but the way we cook nowadays.


The Portuguese empire was the earliest European seaborne empire to grow from the spice trade.It was during this time of discovery that explorers working for the Spanish and Portuguese Crowns first set foot on the New World.Christopher Columbus  was the first when, in 1492, in an attempt to reach the Indies by sailing westward, he made landfall on an island in what is now the Bahamas. Believing to have in fact reached India, he named the natives "Indians". Just eight years later in 1500, the Portuguese navigator Pedro Alvares Cabral, while attempting to recreate Vasco da Gama’s route to India,was blown westwards to what is today Brazil.After taking possession of the new land Cabral resumed his voyage to India,finally arriving there in September 1500 and returning to Portugal in 1501.
By now the Portuguese had complete control of the African sea route and  the Spanish, if they were to have any hope of competing with Portugal for the lucrative trade, had to find an alternate route. Their first, early attempt was with Christopher Columbus, but he ended up finding an unknown continent in between Europe and Asia. The Spanish finally succeeded with the voyage of Ferdinand Magellan. On October 21, 1520 his expedition crossed what is now known as the Straits of Magellan, opening the Pacific coast of the Americas for exploration. On March 16 1521 the ships reached the Philippines and soon after the Spice Islands, effectively establishing the first westward spice trade route to Asia. Upon returning to Spain in 1522 aboard the last remaining ship of the expedition, the starving survivors then became the first humans to circumnavigate the globe.

Portuguese recipes depend on simple ingredients, often in unusual combinations (pork and clams for instance may sound like surf 'n' turf, but it is in fact a Portuguese classic), subtly seasoned with olive oil, bay, tomatoes, garlic and the spices of the East introduced to Portugal by da Gama.Take the classic Canja. Its origin may be found in an Indian rice broth, peze, seasoned with some spices. Eventually the chicken was added to it, and the recipe is still common in Goa.According to another source the chicken broth’s origin would belong to Malabar, also in India, where a soup named kanji can be found. There kanji means nothing other than water with rice. This name and its transformation would more likely fit the current Portuguese name.Other sources cite the origin of the soup as having come from China where they have congee, and some people think canja is from the Tom yam Thai soup.Whatever  these origins we owe De Gama a big thanks for bringing these wonderful spices back to Portugal and latterly into our kitchen store cupboards.

TIPS AND TRICKS TO SPICE UP YOUR LIFE
Do not store spices in glass jars. These are the worst possible containers, being exposed to light humidity and fluctuating kitchen temperatures. Always store spices in tins or foil packets  in a cool dark place thereby avoiding exposure to light and humidity.


Anything older than a few months will begin to deteriorate and lose its potency and flavour, even if the "use by date" contradicts this. Spices need to be fresh to get the optimum result.
Email Post