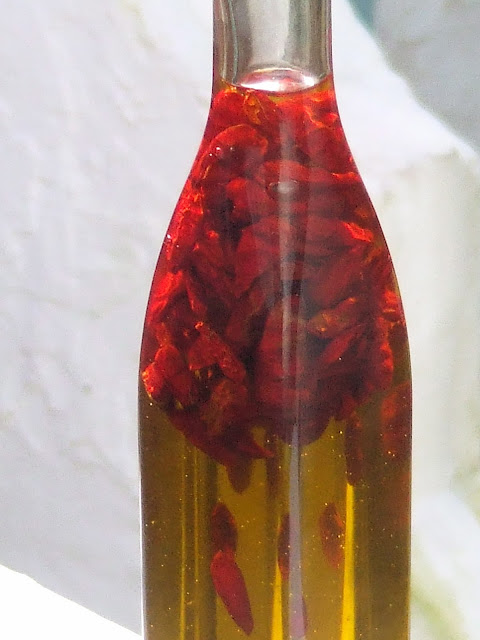 I was ordered by the thespian this morning to use up the glut of Piri piri peppers. His suggestion was to make chilli oil. Fine, I said, and then immediately stumbled like Alice in Wonderland into a hot mineshaft of different recipes. Australian Womans weekly usually comes up trumps when anything needs bottling, but alas I only found a recipe for "pickled chillies."Thats pickled chillies said the thespian,vehemently its something completely different". I went down all the Portuguese Piri piri avenues and could not find anything that said OIL. My requirement was something that looked stunning as well as playing an active role in the Casa Rosada cupboard. The final result was a marriage of Peter Gordon, Europes father of fusion cuisine, and food writer/ television presenter Tom Parker-Bowles. Goodness me, how bizarre is that partnership? Think about it.Returning to underland "curiouser and curiouser."

1. Gently warm the olive oil in a saucepan. Add the chilli flakes and whole chillies to the oil, and heat for 3-4 minutes.
2. Using a funnel, decant the oil into a sterilised glass bottle. Seal and shake well.

3. Store the bottle in a cool, dry and dark place. Once a week give the bottle a shake and after a few weeks, the oil will change to slightly reddish colour. It could take two or three months to achieve the desired hotness
Email Post