Back in October 2010 I posted the first of what was intended to be several posts under the label "The Moroccan Kitchen." Well I´ve taken my time, being sidetracked along the way, but here is the second instalment - Preserved lemons. The Casa Rosada lemon tree has been less than fruitful these past few months. It has now come into its own and providing me with all the lemons the kitchen needs. Today I´ve busied myself bottlin booty. I started with bottled lemons, a way of infusing oil with a lovely taste and aroma.After two months you can remove the lemons, dice them and add to salads,soups or stews.Select smaller lemons, as they will be easier to fit into jars.Wash and dry the lemons.Put the lemons into jars and fill with enough olive oil to cover them completely. Keep them submerged the whole time they are `pickling.´Leave them for two months before using.
TROUBLESHOOTER: Watch out for bubbles that sometimes form when lemons have been in oil for a week or so- this is just the air coming out as they start the `pickling ´process. If this happens you must let the air out every day or two to avoid the fizzing that may occur when you do eventually get around to opening them.Store the jars in a cool place and only use the best unblemished lemons. 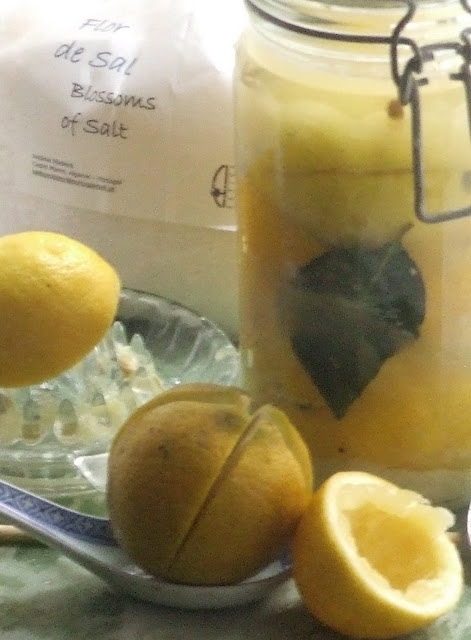 FILLS A 1LITRE (13/4 pint) PRESERVING JAR
8 unwaxed lemons
50-75g (2-3oz)
coarse sea salt
2 bay leaves optional
Sterilize a 1litre (13/4 pint) jar and allow to cool, covered with a clean tea towel. when you are ready to go, sprinkle a heaped tablespoonful of the salt over the base of the jar.
Take a lemon and with a sharp knife, make two cuts through the lemon at right angles,keeping the lemon intact. Start from the stem end and finish about 1 cm (1/2in)short of the other end.Open the fruit out a little and sprinkle the insides with a generous helping of salt, then re-shape the lemon. Pack it down firmly in the preserving jar. Sprinkle with more salt.
Repeat with another four lemons, pressing each one down firmly, so that they all squish into the jar, releasing some of their juice under the pressure of your hand.
Now add the juice of the remaining 3 lemons, and enough water to cover the semi-quartered salted lemons completely. If you are using the bay leaves tuck them down the sides of the jar. Now cut two lengths of strong wooden skewer slightly longer than the diameter of the opening of the jar.Using patience, and a little brute force( but not too much or you will snap the wood9, push them down under the rim of the jar, at right angles to each other, so that they force the lemons to remain submerged in the lemon juice and water.Seal the jar tightly and leave for 1 month before using.
When you need a lemon for a recipe, remove it from the lemon brine with a wooden spoon( not a metal one, which would discolour and taint the remaining lemons).Separate the quarters, cut away the the inner pulp and discard.Cut the peel into strips, or as described in the recipe. The brine is excellent too in salad dressings or marinades, particularly for fish.
Next month, when my lemons are ready, I will post a recipe for the most renowned Moroccan dish containing preserved lemons, Djej Makali ( Tagine of chicken, preserved lemons and olives).By this time I will have returned from my up and coming trip to London with a tagine, or two under my arm.I have travelled the length and breadth of Portugal, and can I find a decent tagine shop, can I heck.The Moroccan influence in Casa Rosada will then be all set to kick in.