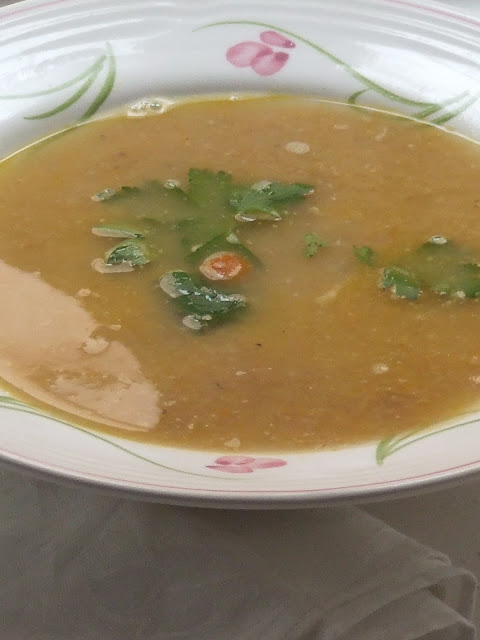 This soup "London Particular,"was named after the thick blankets of yellow fog or `peasoupers´ that used to engulf London.
Surprise you as it may, in the short winter months we have fogs (nevoieros) here in the Algarve too. This week has witnessed some tempo nevoento ( foggy weather ) so my making this soup is quite timely.
We have come to the end of the thespian´s home cured ham and we are now knuckled down to the bone, so I decided to improvise on a traditional English recipe for pea and ham soup. A great use for seasonal leftovers too.

Put all the ingredients into a large pan and bring slowly to simmering point. Set the lid of the pan a little ajar and simmer for about 11/2 hours until the peas are quite tender. Remove bones or hock. Discard bones( reserve hock ).Puree the soup in a food processor or blender and adjust the seasoning.If too thick add some extra stock or water. If using a hock, discard the skin, then dice the meat and return to the soup.Serve.
Make a large pot and  keep it in the refrigerator it won´t last long!