On the flip side 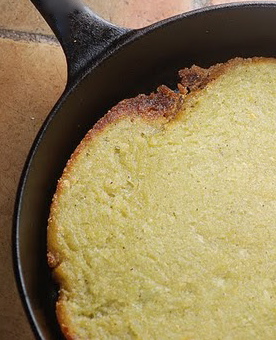 "Entrudo" *or pancake day, is upon us once again,which means that in some shape or form,pancakes are going to be beaten,fried tossed,dropped,raced and eaten every which way across the globe in much the same way as they have been for the past 500 years.The batter must be right,the pan must be right and the cook´s temperament must be right.If your mood is anything but peaceful make bread instead.Should you feel the need to vary your pancake from the usual lemon, sugar or syrup concoction,you could try a recipe from elsewhere in the world.Pancakes it seems predate bread as one of mans oldest forms of cooked food.The Russians specialise in the yeast-risen,buckwheat blini (drop scone) which tastes as good eaten with honey for tea as it does with its traditional accompaniment of smoked salmon.The Italians meanwhile make a Ligurian speciality, (farinata ). An egg free chick pea batter is used,giving a taste closer to an Indian pancake than a European crepe.The chick pea flour is mixed with water to make a thinnish paste,lots of olive oil is added and the mixture is then poured into a large round,flat pan.It is baked in a wood oven,and is ready when a light crust has formed on the top. Farinata is rarely made or eaten at home,its real place is in the street being sold from stalls in the markets, or in Enotecas where it is washed down with a glass of fine Italian vino.When property searching we should have settled for that Portuguese quinta with the traditional wood burning oven on the terrace, sigh, if only.
Cecina o farinata ( Ligurian pancakes)

Pour 1.5 litres /2.5 pints cold water into a large bowl.Gradually add the flour,whisking constantly to prevent lumps from forming.Add the olive oil and 1 teaspoon of salt and mix well. leave to stand for 30 minutes.preheat the oven to 220C/425F / gas mark 7.Brush an ovenproof pan with with oil.Pour the chickpea mixture into the pan and bake until the top is crisp and golden. Sprinkle with pepper,cut into wedges and serve either hot or warm.

Cozinheiro´s twist:Before baking the farinata sprinkle with a topping of sliced red onion and rosemary and or some parmesan or other grated melting cheese.


That said there is nothing like a delicious sweet pancake to raise your spirits (that too).

* Entrudo
The origin of Brazil's carnival goes back to the 18th century when Portuguese immigrants from the Azores introduced a pre-lent festivity called "entrudo", a chaotic event where participants threw flour, water, and limão de cheiro missiles at each other in a street event that often led to riots. No change there then!!!