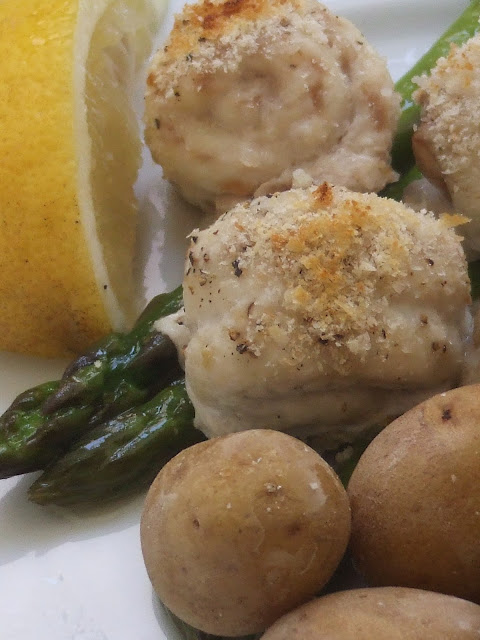 Every week, Michelin-starred chef Angela Hartnett M.B.E. devises a quick, delicious, seasonal recipe to brighten supper time for Guardian readers across the globe. I follow with expat enthusiasm and if the ingredients are readily available "where I am" I shop and cook it. Spanish pork chops with pequillo peppers were right up my rua, so Ange -  thanks for that.Hot sunny weather and happy days are here again and our European lives are brightened by the chance to have light lunches in the garden with a glass of rosé.On Saturday the weekend weather was perfect for sampling the latest offering from La Hartnett. However it is not fault free. Here is classic example of  an accomplished chef unleashing a recipe on the general public without considering the limitations of a domestic kitchen.Nao faz mal, don´t worry,the subtle flavours, delicate taste and fine texture of this dish are pure genius but the recipe has quite clearly been conceived and developed in an industrial kitchen where turbo, steam ovens and other such luxury aids are prevalent.The timings are incorrect, and I have also had to rewrite the quantities with which Miss Hartnett has gone copiously astray ( I halved the quantity of breadcrumbs and cheese and still ended up with enough left over to feed the five thousand with loaves and stuffed fishes for a weekday supper).The only other problem was with the "local fish" for local people.The sole of Portugal does not quite carry the soul of the Great British sole when it came to the filleting.Antonios boys in the fish market made a cack handed job and I brought it home where the thespian put his Macfisheries experience of many years ago to the test and saved the day. Having done all this  we ended up with something tasty tasty, a dish of star quality.The recipe below is my rewrite, but if you want to refer or follow the original here is the link to the Guardian.I also added  runner beans and baby new potatoes to the final plate I dished up.


Spread a teaspoon of oil across an oven tray with a splash of water. Season and roll the sole fillets, place them on the tray and cook in a preheated oven at 180C / gas 4 for 12 minutes., or until tender to the tip of sharp knife
Meanwhile, combine the breadcrumbs and cheese and snap the woody ends from the asparagus.
Pour 25ml of oil into a lidded pan large enough to hold the spears and put on a medium heat.
Add the asparagus and the water, replace the lid and cook for 3-5 minutes.
Remove the fillets from the oven and check they are cooked through by piercing with a skewer or sharp knife.
Sprinkle the top of each rolled fillet with the breadcrumb mixture and put them under a medium grill.
When the sole is light golden brown, remove and place on a plate on top of the asparagus, with the cooking juices.( I ended up with no cooking juices)
Serve with lemon juice drizzled over the top and a wedge on the side.
Email Post