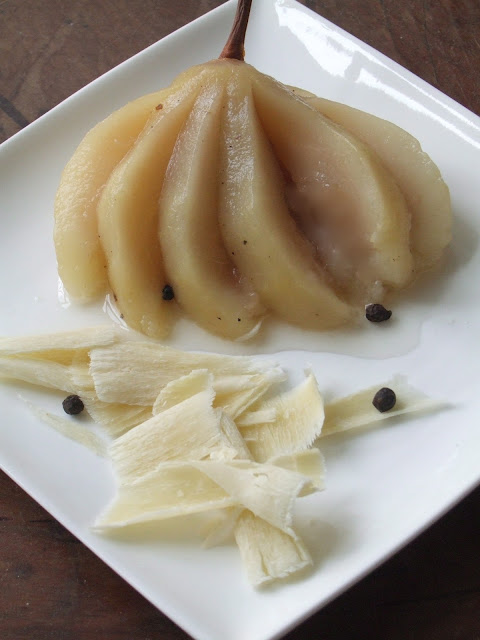 The combination of Portuguese desert pears and a strong mature hard cheese has always been a favourite flavour pairing for me.The poached pears bring a note of sweetness to the dish, while the black pepper brings out the flavour of the cheese.
Wash this down with a glass of Moscatel de Setubal or an Amarguinha and you have the perfect finishing touch to a Spring dinner.
Peppery Poached pears with Nisa Cheese

Peel the pears leaving the stalk intact,then core them by scooping out the base with a melon baller.Do not cut them open.
Place the pears in a large pan with the pepper,lemon juice,sugar and cinnamon.
Add enough water just to cover.Cook over a very low heat until the pears are tender-about 10 -15 minutes.
Remove the pan from the heat and allow the pears to cool in the liquid.
When the pears are cool,drain them,reserving the syrup and removing the cinnamon stick.
Using a sharp knife slice the pears neatly from the base up without cutting through the stalk end.
To serve, fan the pears out on a plate and serve with a little of the syrup,the cheese shavings and some peppercorns to garnish.Since developing and photographing this recipe I now serve different coloured peppercorns, red, green and black as the garnish.The choice is yours.
Email Post