Sugar and spice and Portuguese belly pork is nice 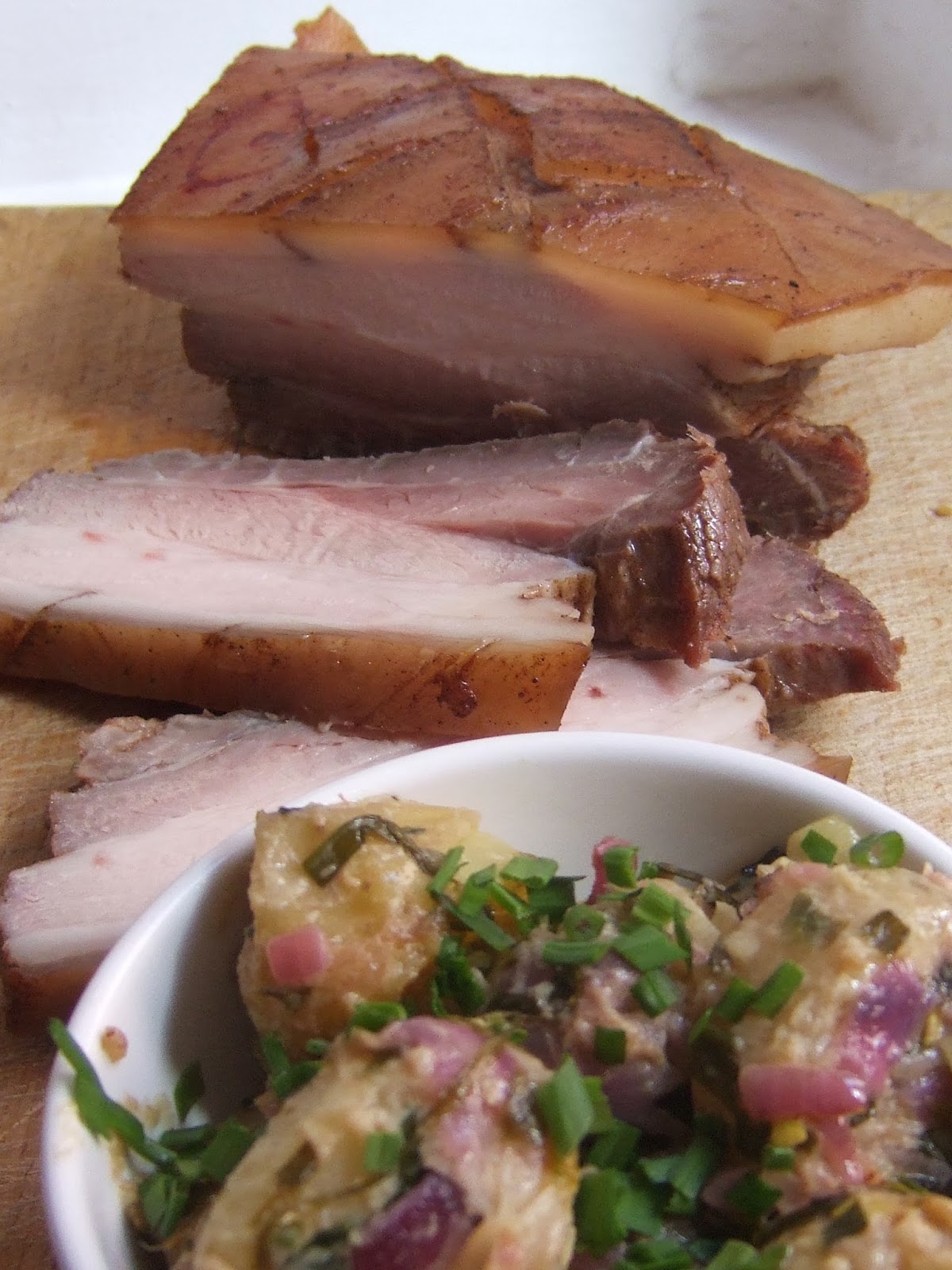 I´ve been sitting on this one for a while.This is another of those recipes inspired by watching a television programme.As the original recipe (not of Portuguese origin) was obviously cooked in bulk for a restaurant it was probably not intended for a home interpretation,but nevertheless It aspired to being given a try.The Portuguese love a pig and every part of the beast finds its way to the table. No more so than the more fatty cuts,so fat-o-phobes look away now.If you have been to Portugal you will already know that pork will confront you at every meal, including breakfast.The recipe in question was “Roasted Pork Belly with Warm Potatoes and a Celery Radish Salad”
The idea in my mind was to give a piece of belly pork a sweet and spicy flavour. With that in mind, I rubbed it with a mixture of brown sugar, salt and Quatres-epices.
I wrapped it in cheesecloth and enclosed it in a zipper-bag (having squeezed the air out) in the fridge, allowing it to "marinate" in the rub for five days.
The spice mix quatre-épices is one of the mainstays of classic French cuisine. And no wonder, says Heston Blumenthal - "this heady blend of cinnamon, clove, black pepper and nutmeg will add a certain je ne sais quoi to any dish".I decided to abandon the celery radish salad and concentrate on the warm potatoes as my accompaniment.
The classic French spice mix quatre-épices (also found in middle eastern kitchens) has a wide range of uses (you can add it to just about everything from stews to patés), but its most important use is in the making of foie gras terrines. The four spices that make up the mix, while not totally cast in stone, are generally agreed to be cinnamon, clove, nutmeg and black pepper. Ginger and allspice sometimes find a way in, too. (This wonderfully simple spice mix should not be confused with the Chinese version, five spice, which consists of star anise, cinnamon, fennel seed, cloves and ginger, with a sixth spice, cardamom, sometimes added.)

Quatre-épices
Equal weights of:
Whole cloves
Whole black peppercorns
Whole nutmeg
Cinnamon sticks
Put all the ingredients in a coffee grinder and reduce to a powder. If you want it as fine as possible, rub through a tea strainer.

Dipping Glaze:(optional)
3 tablespoons soy sauce
1 tablespoon red wine vinegar
1 tablespoon hot sauce
In a small bowl, mix together the brown sugar, salt and five-spice. Score the skin of the pork belly, then rub all of the spice mixture over the entire piece of pork belly. Wrap tightly in cheesecloth and seal in an zip-bag, squeezing out as much air as possible. Refrigerate for 3-5 days. Remove pork belly from bag and cheesecloth, rinse off spice mixture and dry. Heat a tablespoon of oil in a frying pan and brown the pork belly on all sides. Wrap the pork belly loosely in aluminum foil and cook in an oven set at 275 F 135C for 2 1/2 - 3 hours.
Once the pork belly is done, cool and set aside. Once cooled, portion the belly into 3/4-inch by 3-inch slices.
Meanwhile, heat a deep fryer to 350 degrees F.

For the dipping sauce (if using): Combine the soy, hot sauce and red wine vinegar.

Deep fry the pork belly portions in the hot oil until nicely browned, about 2 minutes. Remove and dip in the glaze. Serve with the potato salad

* Don't make up quatre-épices too far in advance or in a big batch, because it will lose a fair bit of its great aroma. Just as well it's so quick and easy to put together.
Email Post