This is the time of the year for wild fennel fronds. - See more at: http://cookingwithrosetta.com/foraging-and-cooking-wild-fennel/#sthash.96RoDUE8.dpuf

This is the time of the year for wild fennel fronds. - See more at: http://cookingwithrosetta.com/foraging-and-cooking-wild-fennel/#sthash.96RoDUE8.dpuf 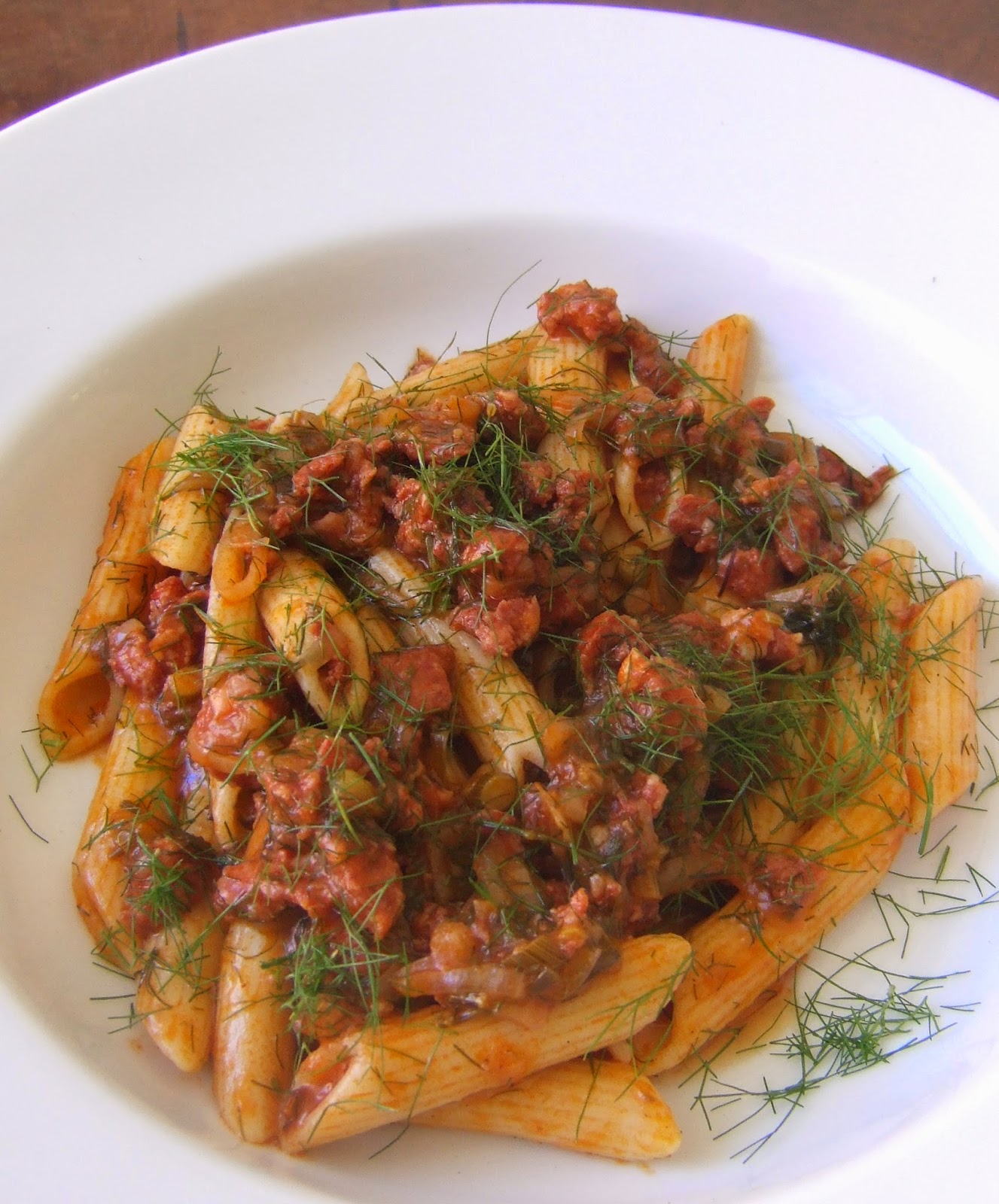 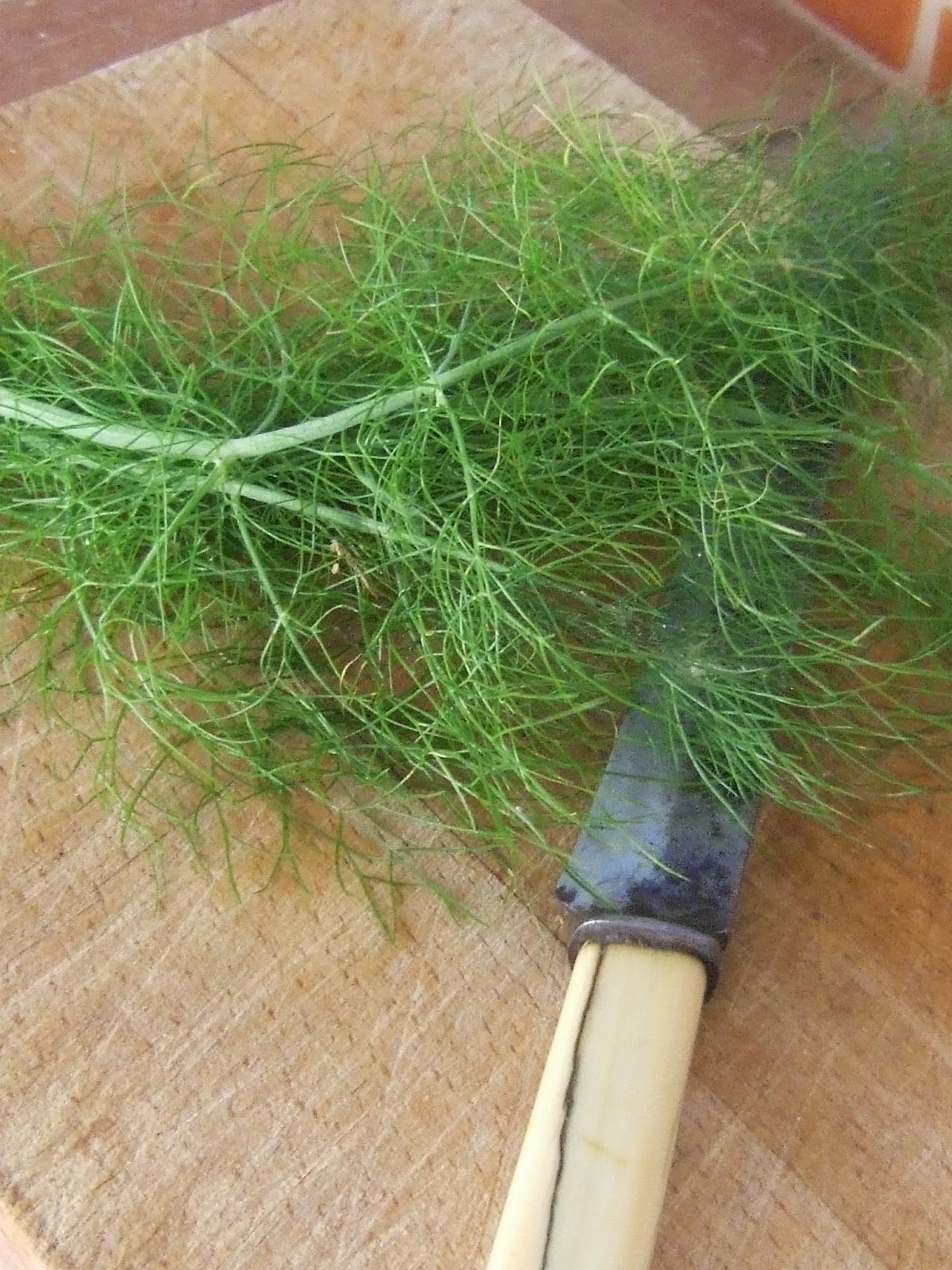 This is the time of year for wild fennel fronds.
Not everyone appreciates the taste and smell of this wonderful herb. For as much as I dislike licorice, I really like fennel when it is cooked properly.It sweetens up and adds flavour to many dishes.
This highly aromatic plant is a member of the celery family, Apiaceae or Umbelliferae. My passion for celery perhaps explains why I am curious about fennel.There are different strains of the plant.Wild fennel, unlike its temperamental cousin Florence, is better behaved.While the cultivated Florence elegantly hogs the limelight and struts her stuff in front of the cameras at Chelsea  flaunting her feminine curvaceousness,this poor underestimated cousin with its feathery fronds blowing in the wind like a Mardi Gras feather boa, defies fashion and fills the air with a heady scent of anise ( another near relation). Sure,feral fennel is a weed,but so are many plants we forage.Well how surprised was I, when I found it growing in our garden.Here was the perfect chance for me to convince myself of what a wonderful herb this is.I use the word herb because wild fennel,unlike Florence the cultivated variety only has a small,inedible bulb.It is the first very tender  shoots that make an appearance in late spring that one uses to eat raw in salads,to flavour sauces or as garnish.These little fine leaved feathery brushes are marvellous to throw on to charcoal embers to flavour barbecued meat and even more so fish.Use the stalks for this as they will keep their essential oils when dried.
During the spring the green fronds sprout from the old roots of the previous year. They then grow throughout the spring and summer into tall cane-like stems.One of the most important usable parts of the plant is the seed,which should be collected before the end of the summer when fully formed but not yet completely dried out( so still green).
By July the plant blooms with yellow “flowers”, that are, in fact, immature seeds that some people,particularly here in Portugal use to make “fennel pollen”and for a variety of other medicinal applications.Fennel is widely used in Italian and Provençal cooking to flavour both savoury and sweet dishes.From Tuscan pork salami to bread biscuits and even to flavour savoury dried figs,its uses are endless.In Portugal where it is called Erva doce it has not really found a place in the cuisine.It is more often used for its medicinal properties.I decided to go for an Italian recipe but with a key Portuguese ingredient.Two obvious choices came to mind,both pasta dishes. The first "Pasta con le sarde" (pasta with fennel and sardines)seemed perfect obviously because it used one of Portugals national treasures but also because it included Moorish influences of pine nuts and raisins.I decided to save this one for later and settled for Pasta con Finocchietto selvatico e salsiccia ( Penne with wild fennel and sausage ).This is a classic Italian recipe but I had to improvise where the sausage was concerned.Those wonderful Italian salsiccias are not to be found here in the Algarve so I thought I would experiment and use a Portuguese chouriço instead.It proved to be a successful decision and the resulting dish was delicious.I shall definitely be making this again.Here is my take on this sometimes overlooked weed.
Massa penne com erva doce selvagem e chouriço
so simple so easy and only four main ingredients
Serves 6
1 tablespoon Flor de sal
450g / 1lb Cooking Chouriço
handful of fennel stems and fronds(about 450g/1lb)finely chopped
5 tablespoons extra virgin olive oil
2 onions peeled halved and sliced
1/2 tsp Flor de sal
1/2 tsp piri piri flakes
150g/5oz tomato purée
450g penne pasta
Extra fennel fronds and grated parmesan for garnnish

Bring a large pan of salted water to the boil.Remove the sausage meat from its casing,breaking it up with your fingers.Separate the fennel fronds from the stalks and set aside for later.Finely chop the fennel stalks.
Heat the olive oil in a frying pan over a medium heat.add the sausage meat and cook stirring and breaking it up with a wooden spoon for about 2 minutes until it is sizzling and beginning to brown.Push the sausage to one side,add the onion and cook stirring constantly for about another two or three minutes till it is sizzling and wilting.Push the mixture to one side and add the chopped fennel stalks.Cook for a few minutes until wilted then stir it into the sausage and onion mixture.Sprinkle in half the salt and mix well.Add the chilli flakes and toast briefly before stirring into the mixture.Keeping the mixture to the side of the pan,add the tomato purée and cook stirring constantly for about two minutes until sizzling and caramelizing then stir it into the sausage mixture.Ladle 750ml(1.25 pints) of the salted boiling water into the frying pan,stir well bringing the mixture to the boil.Lower the heat and simmer for about 6 minutes until the fennel is soft but not mushy.Add the pasta to the pan of boiling water,stir and bring back to the boil.Cook until almost al dente (about 8-10 minutes).Check the sauce which should not become too thick.If necessary stir in another 250ml of boiling water from the pasta pan.When the sauce is done check the seasoning and lift the pasta out of the pan with a spider (pasta spoon) or slotted spoon,drain briefly and add to the simmering sauce.Sprinkle with the reserved fennel fronds and cook tossing constantly,for afurther  two minutes until the pasta is perfectly al dente and coated with the sauce.Serve in warm past a bowls garnished with the extra fennel fronds and a dusting of parmesan.
Pasta con Finocchietto Selvatico e SalsicciaPenne with Wild Fennel and Sausage1/4 pound (115 grams) wild fennel fronds, leaves and slim, tender stems only 3/4 pound (350 grams) fresh sweet or hot Italian sausage or Fresh Homemade Fennel Sausage Calabrian Style
1/4 cup (60 milliliters) extra virgin olive oil
Kosher salt
1 pound (450 grams) penne rigate or rigatoni
Wash the fronds well in hot water as they can harbor small insects. Bring 5 quarts (5 liters) of water to a boil in an 8-quart (8-liter) pot over high heat. Add the fronds and boil 10 minutes, then lift them out of the water and into a colander, reserving the water to cook the pasta. Drain the fronds well and finely mince. You should have 1/2 to 2/3 cup minced greens.
Remove the sausage from its casing. Break the sausage into small clumps with a table knife.
Heat the olive oil in a 10-inch (25-centimeter) skillet over moderately high heat. Add the sausage and cook until it is no longer pink and begins to brown lightly. Stir constantly with a wooden spoon, breaking up the clumps into smaller bits. Add the fennel greens and stir well to distribute them and coat them with the oil. Season with salt. Reduce the heat and keep warm.
Add 1/4 cup (35 grams) salt to the water in which you cooked the fennel. Return to a boil and add the pasta. Cook until al dente. Set aside 1 cup (250 milliliters) of the pasta water, then drain the pasta and return it to the skillet with the sausage and fennel greens. Cook, stirring, over moderate heat for a minute or two to flavor the pasta, moistening it with some of the reserved pasta water. Serve immediately.
Serves 6
- See more at: http://cookingwithrosetta.com/foraging-and-cooking-wild-fennel/#sthash.Xys3l4xg.dpuf
Email Post