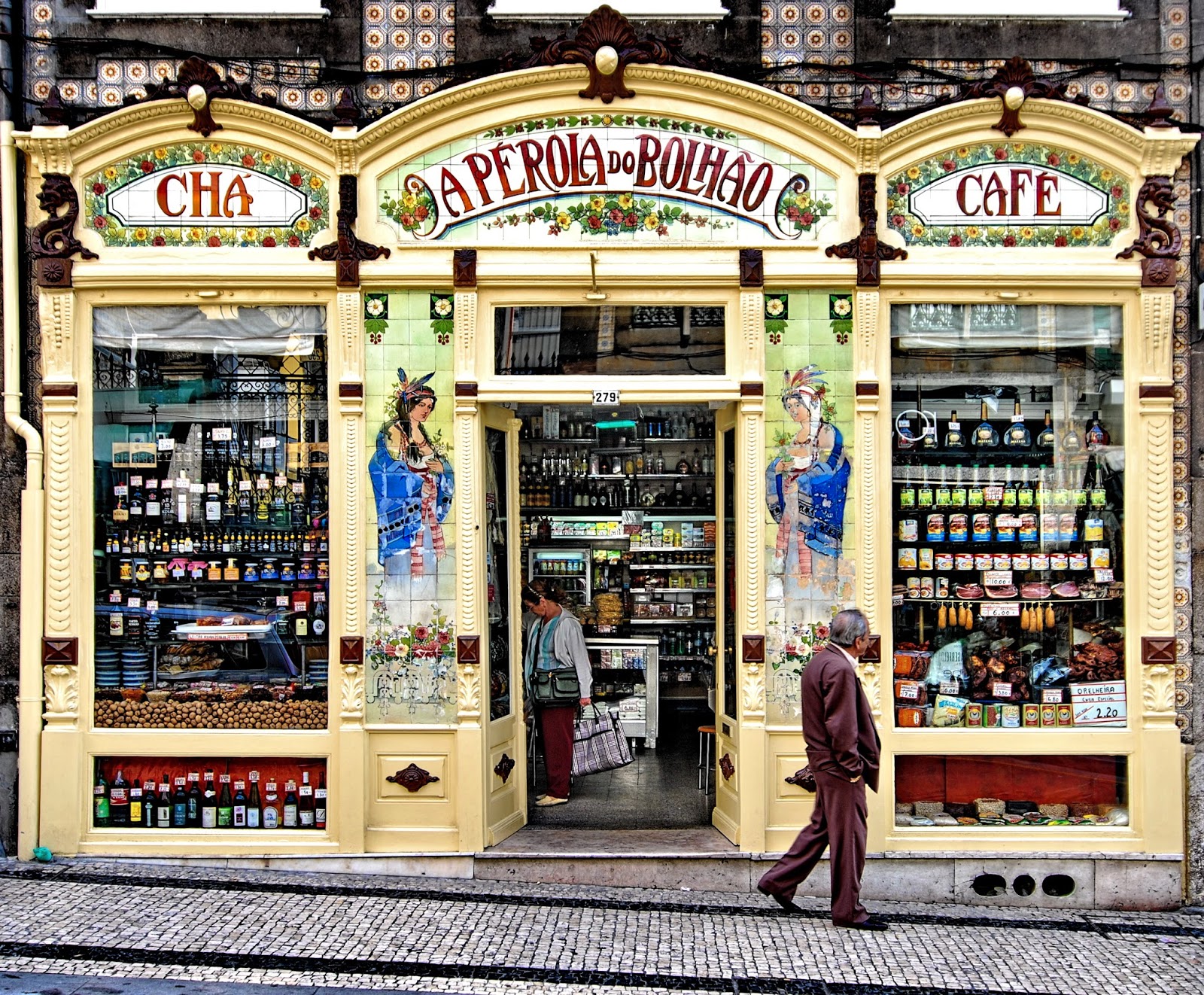 A Perola do Bolhao,one of Porto´s oldest and most beautiful delicatessens

Food is a cultural expression. My first priority when I arrive in a city is FOOD!!! I always visit the local markets, padarias, confeiterias,mercearias and check out the restaurants.There is no better barometer for what a city eats than a visit to its market.A market, and to a lesser extent the delicatessens, will reflect what you will be served in any city´s restaurants.As you saw in Part 1 my first excursion on arrival in Porto was the market.That mission accomplished an exploration of food shops and delicatessens was high on the list for Day 2.
The day started with breakfast at Bela Torre, the cafe next door to the bookshop Livraria Lello whose staircase inspired JK Rowling to write the Harry Potter series. The stairs in Lello are known for being the inspiration for the stairs at Hogworts. JK Rowling came to live in Porto and work as a teacher of English as a foreign language.
This pasteleria became our breakfast choice every day.Good coffee and amazing pasteis (forget dietary restraint, just eat and enjoy) under a great view of The Clerigos Tower.Well I have to say in most people´s books a first time city break would revolve around sightseeing with meals in between.Our break ended up being meals with, if possible, a bit of sightseeing in between.
Our first visit of the day was to A Pérola do Bolhão, a traditional grocery store, located a couple of steps away from Mercado do Bolhão.
Very much like its younger counterpart, A Favorita do Bolhão open since 1934,the older A Pérola has a large variety of quality national products, from mountain cheese to dried fruits, from good wine to deli meats and Portuguese traditional cookies. Before the products catch your eye, the façade will with its beautiful Art Noveau entrance covered in Portuguese tiles. If you look closely you’ll notice that the images are of women holding tea plants and coffee plants, as the lettering on top refers to “Chá” and “Café”.
We were only a schlep away from Hotel Teatro. The building was once a real theatre.The Teatro Baquet was inaugurated in 1859, but closed down again after a huge fire in 1888. Time passed but the theatre wasn’t forgotten, and when Nini Andrade Silva was appointed with the mission to redesign the interior of the building, he stayed true to its original spirit. 122 years after the fire, the Hotel Teatro now has four stars.Imposing heavy doors, devoid of a doorman, were not giving away any secrets of what was behind.
Having finally managed to open these impressive doors,we took the chance of glancing over the tasting menu for the Hotel´s restaurant Palco (which means ‘stage’).Palco had been recommended to us,but you never know until you taste for yourself. On paper it looked like one of the best tasting menus we had seen,but would we take the risk? We went back in the evening and had a goldfish bowl of Hendricks gin and Tonic in the open terrace area.When you walk around the Hotel there are references to its past in every corner. The reception looks like a box office, theatrical costumes are waiting for their actors in the hall ways and the dim lighting makes you think that a show is about to start.Unfortunately the light was too low and the show was going to have to start without us in the audience.we decided to pass on the dinner.
When in Porto a river trip on the Douro is a right of passage – a quick cruise underneeath the arches of the six bridges.Oh dear then it was time for lunch.Rua de Flores is fast becoming the new fashionable drag and after a pre-dinner drink the night before we had already earmarked a lunch spot - Restaurante (LSD) Largo Sao Domingos with its simple but clever and inventive menu. 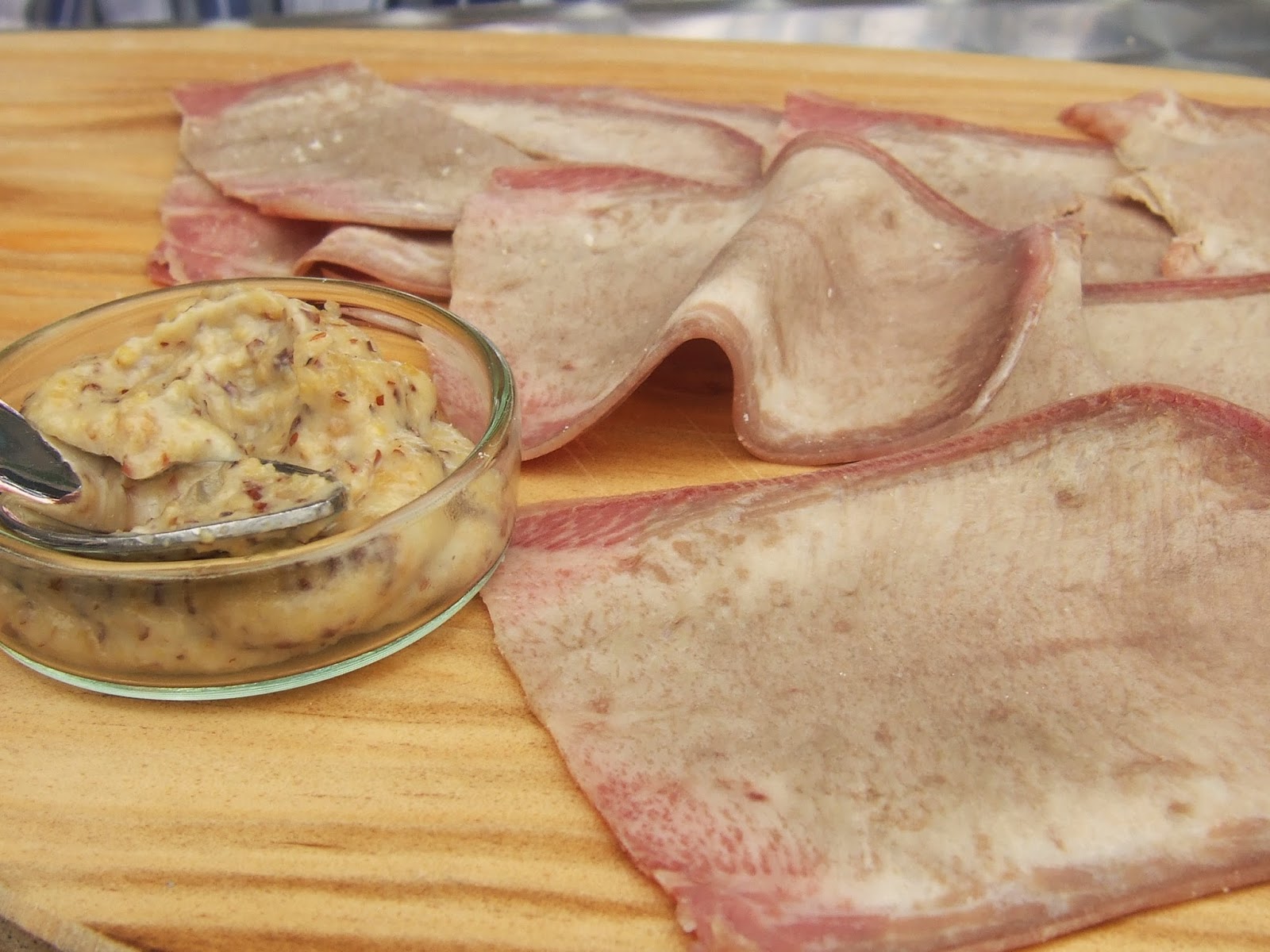 I re-touched childhood memories with a plate of Lingua de Afiambrada,ox tongue and home made seed mustard 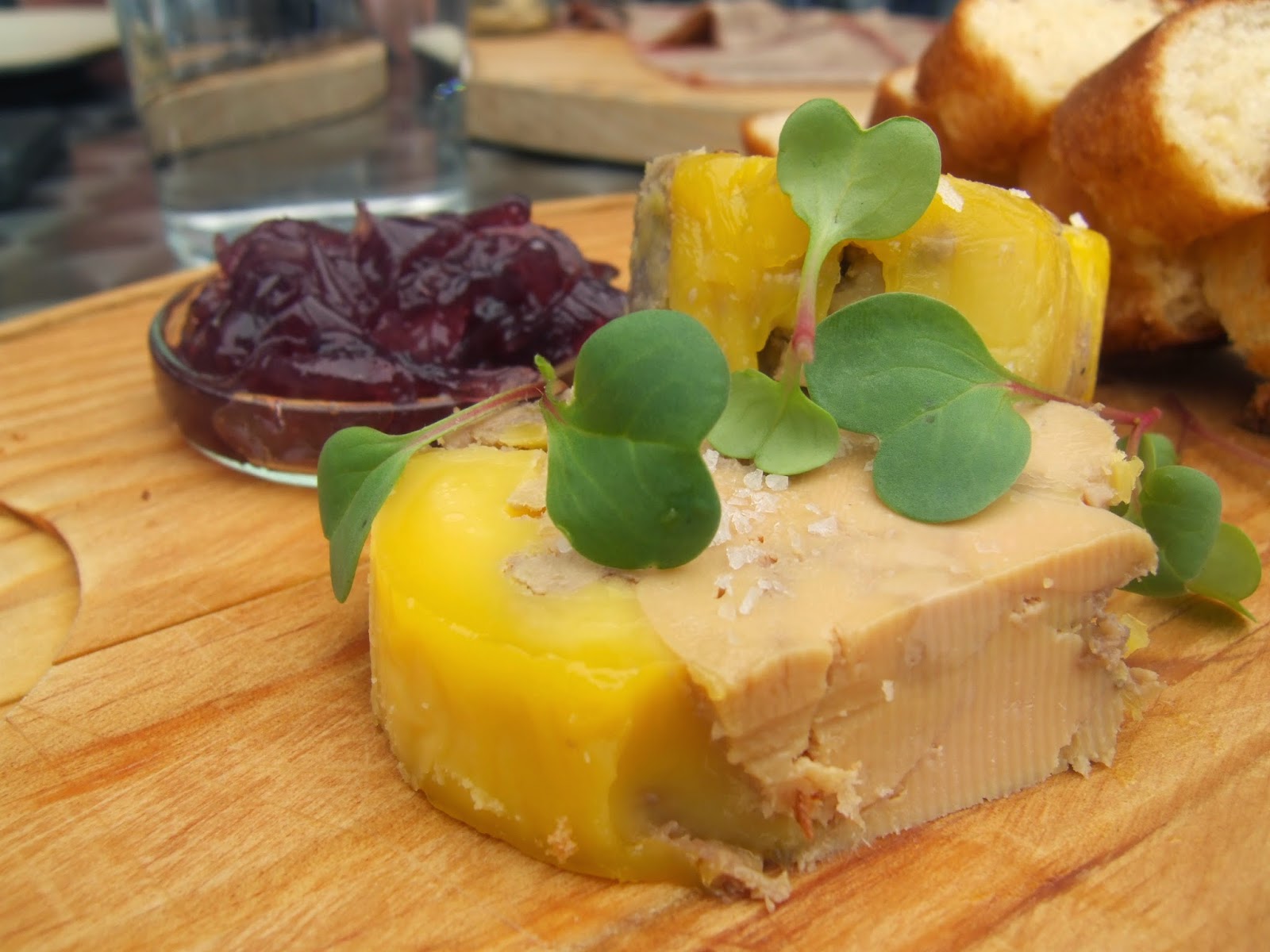 The thespian opted for a terrine of Foie gras which came with a mouth watering red onion marmalade .We washed it down with an excellent recommendation from our waitress,a bottle of Vila Regia.
Vila Regia ('Royal Village') is the name once given to towns founded by a king. In Portugal there are many villages of this kind referred to in the cartas de foral ('charters of privileges') or royal charters that listed benefits, rights and duties for land and people. It was great to discover that this young Douro wine was bottled just across the river at Sogrape Vinhos' premises in Avintes, Vila Nova de Gaia. 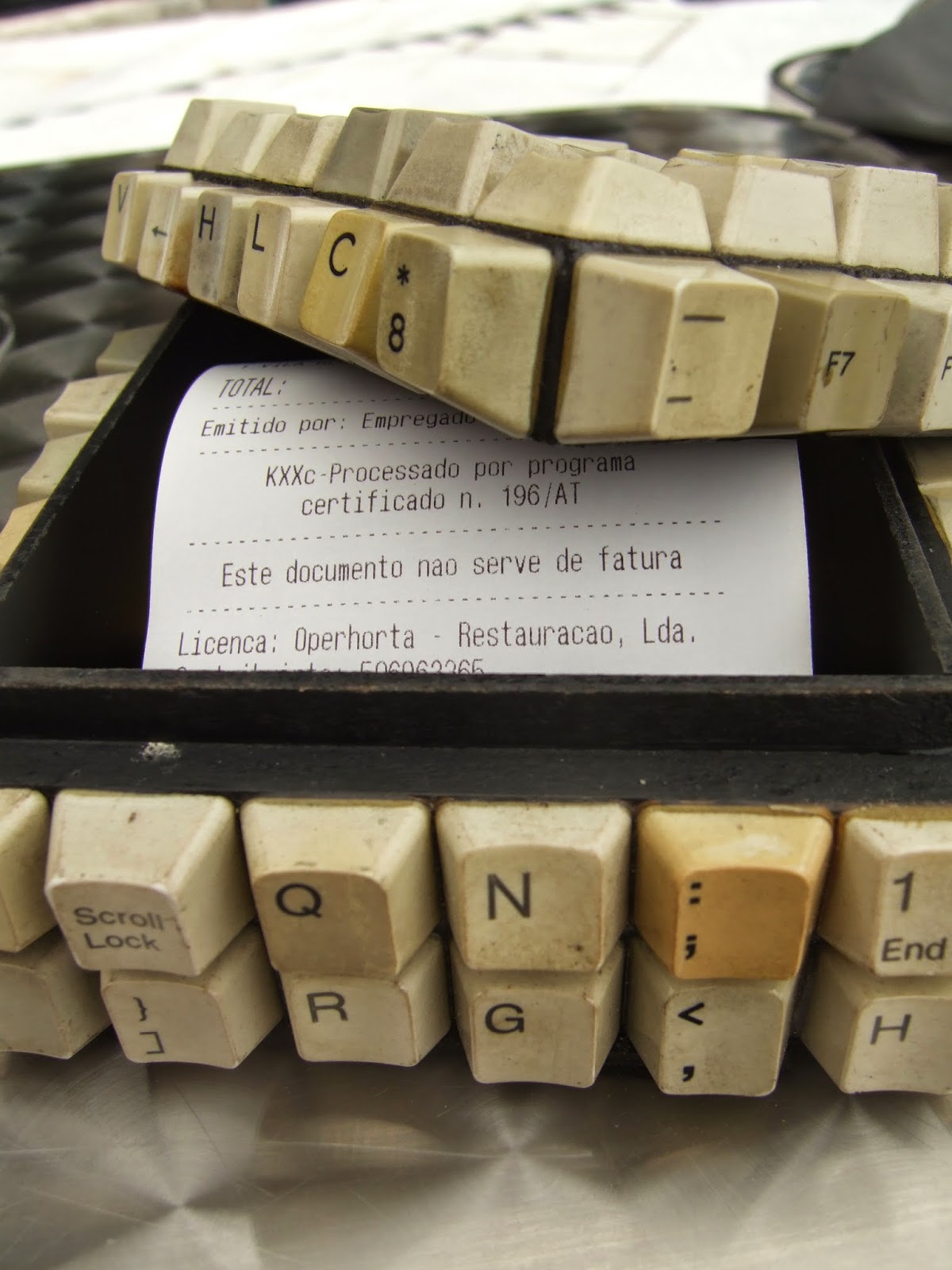 Our bill was presented to us in a box made from re-cycled computer keyboard.
After that lunch,would we return for dinner? More on that story in part 3.That was lunch done, it was back to more food exploration.Back up the hill and this time a visit to Casa Oriental.
Founded in 1910 next to the Clerigos tower they began to market products from the Oriental and African colonies. Coffee, chocolate and teas sold since the early nineteenth century are still evident on the facade of this famous grocery store, with the representation of a scene from Colonial Africa. After the 2nd World War, the range of products increased and they started selling Portuguese regional products. The present owner, Jose Maria Gama, has decided the hallmark should be Bacalhau. 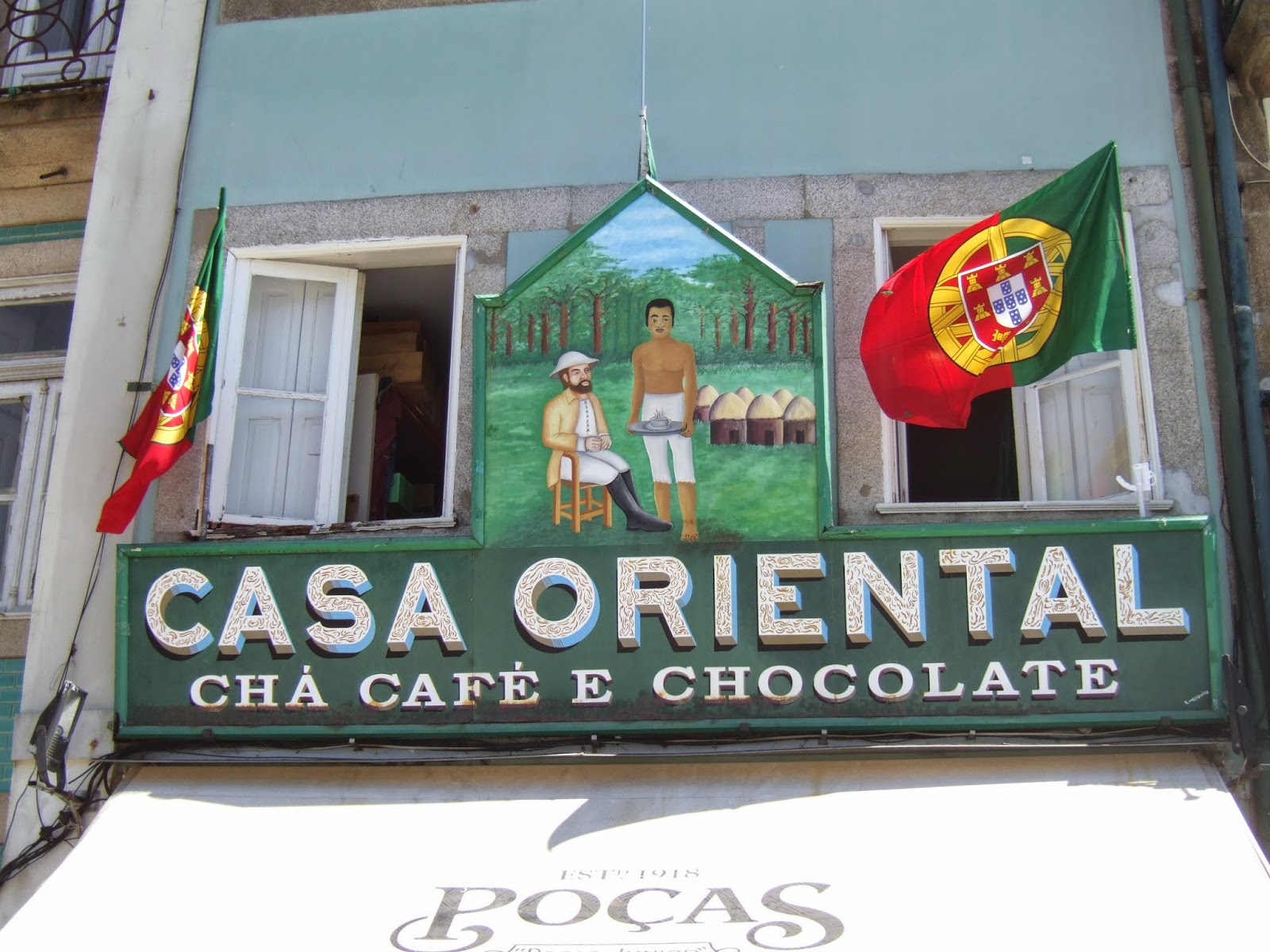 Once you walk through the door of these food shops, there’s no turning back. The smells and deliciousness overwhelm you. In this case the not so salubrious smell of dried cod.The selection is enormous. If you’re a fan of figs, you’ll find your favourite variety from different regions. Are you nuts for nuts? Walnuts, pecans, cashews, brazil nuts, hazelnuts, peanuts, pistachios, almonds, pine nuts, macadamia. I could go on and on........

Our second dinner in Porto was somewhat of a surprise.The recommendation came from the receptionist in our hotel.If she had not told us and made the reservation for us I don´t think we would ever have stumbled upon it. 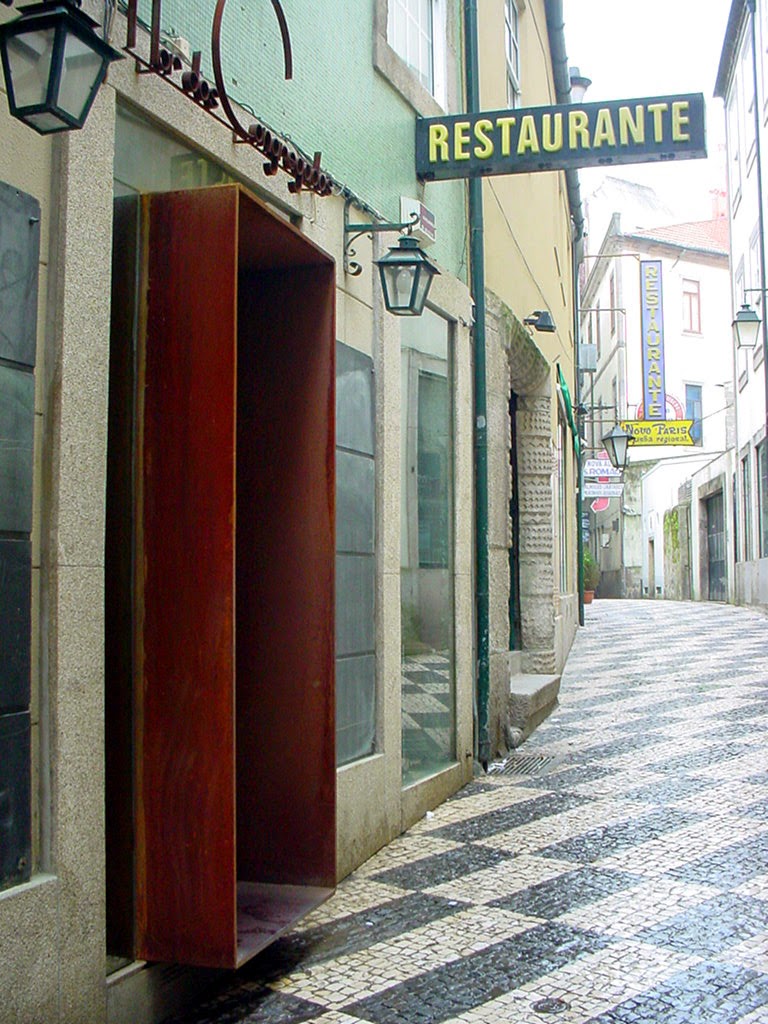 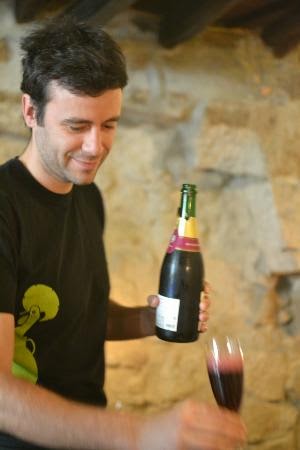 Tucked away in a narrow cul-de sac behind the Avenida is one of Porto´s best kept secrets Flor dos Congreados .This is one place that you will never forget! It is Porto´s oldest restaurant, over 150 years old and tucked into ancient city walls.For me history and cooking are closely affiliated.As soon as you cross the threshold of this lovely restaurant you feel that the walls have stories to tell,they breathe history. There’s no such thing as microwaves here and everything’s cooked in traditional wood ovens and the meals are served on traditional plates.The handsome and charming Andre (above) greeted us and seated us at a lovely table in the corner. 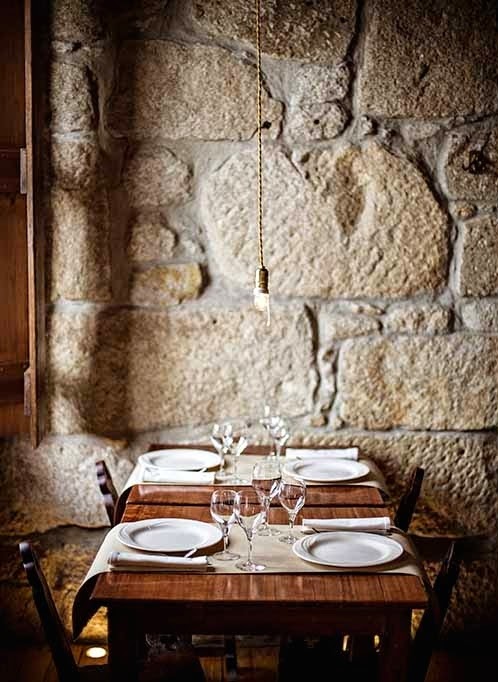 His sister-in law presented us with the menu
on a small handheld chalkboard proudly sharing with us the the cuisine of of their region. The menu is limited but with more than enough variety to make it interesting.She suggested we start with the cheese and meat board.Well we have had couverts here in Portugal but this was something else.Every cheese was a winner,likewise the selection of regional meats.All the wines are sparkling and deliciously Douro. 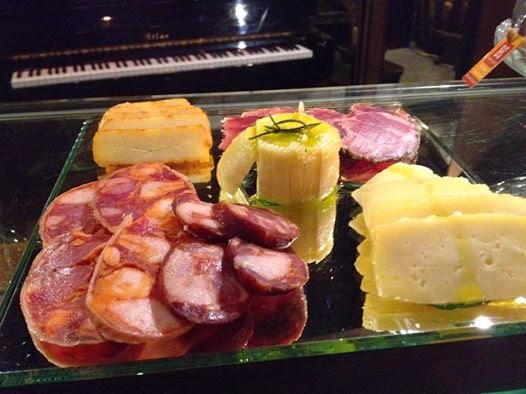 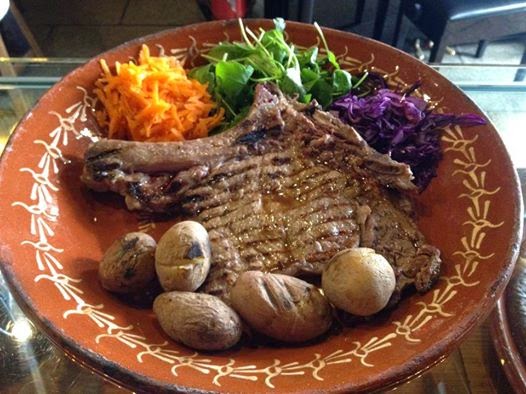 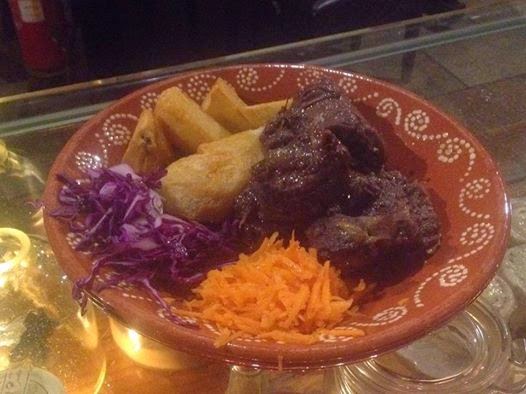 Nacos de vitela à Beirão (Veal chanfana)
The thespian ordered A costeleta da flor, a succulent veal cutlet while I opted for
the Nacos de vitela à Beirão.A truly local dish which Andre was well impressed that I recognised as a veal Chanfana.This is an extremely regional dish from the Beira region.It is marinated over along period in wine and spices and then baked in the wood oven.
What a memorable dinner and perfect ending to our second day in Porto. 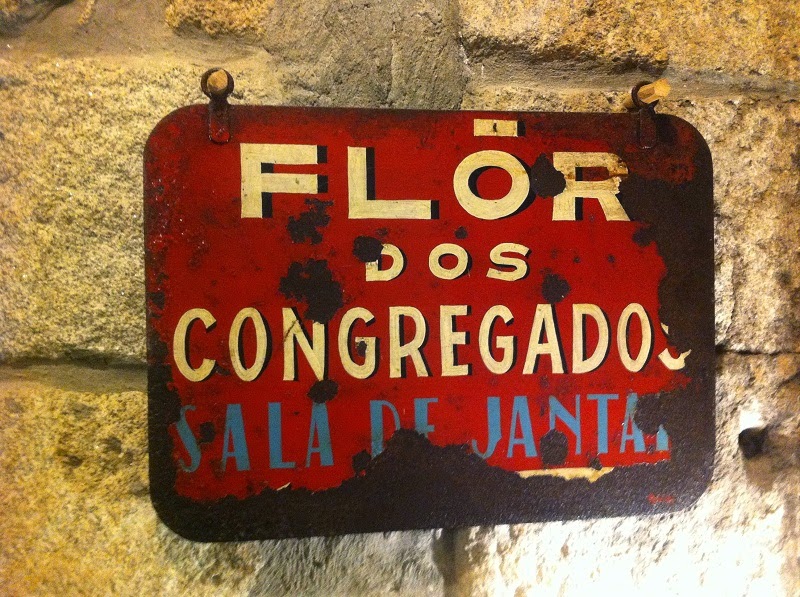