Lets raise a glass of tonic wine and a sponge finger... 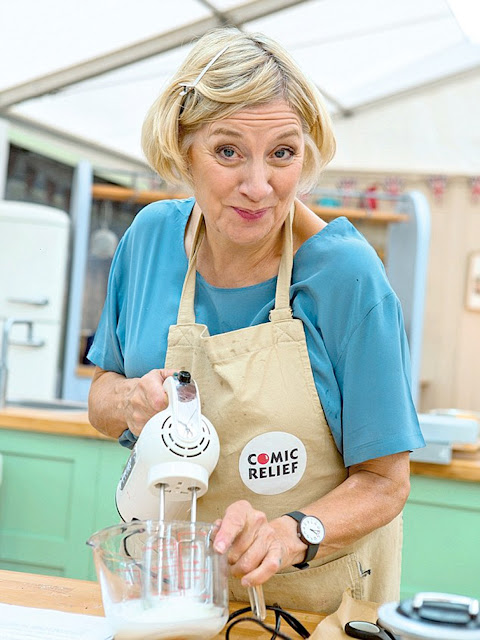 In one of her final appearances Victoria Wood showed off her culinary skills last year on The Comic Relief Bake Off as she attempted to make a tray bake with varying degrees of success but proved to be hilarious. Despite some initial issues with her bakes, she went on to be crowned the queen of cakes.

With the sad and totally unexpected passing of comedian, actress, singer and songwriter, screenwriter and director Victoria Wood this week, its near impossible to truthfully say that no one´s life has  passed without in some way being influenced by her. For many like myself, simply hundreds of her lines have entered into my daily speech.Ever since I started blogging six years ago, rather than taking the first word that came into my head  I have always searched hard and fast for an alternative, something more bizarre that turns a sentence from being mildly amusing into  something that forces the reader to "laugh out loud" Never use a word like biscuit when you can use custard cream or hobnob. She chose every word so carefully to maximise the comic impact.The Thespian was in a restaurant with her once and remarked "Are you not going to finish your pizza, Victoria?"

"I thought I´d pop it in my handbag and toy with it later" was her off the cuff answer.
On Friday 5 August 2011 I included this following paragraph in a blog about cheesecake

......In this case the extra help was a beating on the bottom with a Womans Weekly. Whenever I am stuck for a culinary solution my search engine smacks into Australian Womans Weekly, bend me over backwards on me hostess trolley and my dilemma has become a delicious dessert. I abandoned their suggested base of NICE biscuits and opted for a classic digestive biscuit base.

to which a reader, obviously another massive fan, left the comment

"How on earth did you manage to get the bend me over backwards reference into an article about cheesecake!"

For me it was most often her observations about food that would raise the greatest laugh.

Is that streaky bacon? Well, it is but it should wipe off...

What was it Muesli? What was it, muesli? I think so Mrs overall

I have been meaning to write another cheesecake post for some time now so I thought this was the perfect chance to pay homage to my all time favourite comedian.Cheesecake is a summer favourite and the perfect buttery biscuit base is what it makes it really special, while at the same time making everything around you alright, so just remember the next time you and your partner are having a straight up digestive, try putting the world to rights with a cheesecake.Just remember anything can be solved with a hot cup of tea and a macaroon

It is the brand of biscuit you select that is crucial when making a cheesecake.Obviously many varieties have been tried.Certainly not the Rich Tea,with its austere reputation  of being the unadorned biscuit to accompany you to bed with a mug of Horlicks.It is as basic a biscuit as has ever been devised just like its counterpart, the Spanish Maria.These two  would constitute a very different and totally wrong crumb base as opposed to the more favoured "Plain Digestive".
Don´t get me wrong,I have always had confidence in Maria´s capabilities of producing the optimum Bolo de bolacha.  Smart modern chefs, when it comes to cheesecake, have recently turned their desires to more adorned biscuits such as the Oreo,such fun.The Americans however opt for "Graham crackers"which are hard if not impossible to find this side of the pond.Isn´t it lovely  tho' that we all try to convert our favourite recipes so that others can have a go too.
We (the British) are very much a biscuit nation (probably something to do with a cup of tea being too wet without one!) so the dunking possibilities are endless!
Anyway so, Cheesecake baked or chilled? I am a cold setter.
Baked or cold-set, cheesecakes offer chefs endless opportunities for individual creations.What I have learnt recently is that cheesecake is a perfect example of a speciality that evolved from a practicality.
Migrant tribes in Eastern Europe and Asia devised cheesecakes as a way of using up the surplus of their basically made cheeses.While cheesecakes have now become far more sophisticated, the essential choice is between baked or cold-set.
Here are 3 cold-set cheesecakes that I am sure she would have liked....

What scone is scone