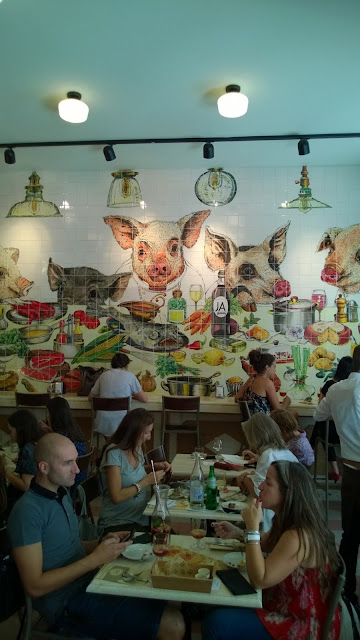 Can you beat it!? He´s done it again.One of the most renowned chefs in Portugal, Jose Avillez, has opened yet another restaurant that is sure to become an instant Lisbon classic.Can you believe it, this 37 year old maestro  now owns seven restaurants, six in Lisbon and one in Oporto.This, his seventh venture, is located in Chiado close to his other foodie destinations, Belcanto, Minibar,Pizzaria Avillez, Café Avillez and Cantinho de Avillez. 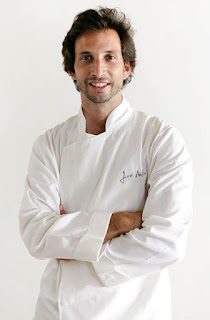 The name of chef José Avillez‘ seventh food project couldn’t be more accurate too; Bairro do Avillez literally translated means Avillez’ neighborhood. It is indeed the beloved neighbourhood of the two-star Michelin chef. His latest food adventure is located in a former convent, the Trindade Convent, which seems to be the perfect place for such heavenly, mouthwatering food, as foodies might agree,or perhaps they might not.
We ate there for lunch on our last day in Lisbon and we wished we had discovered it earlier! We had, but it was the weekend and we couldn´t get near the place. The punters were being drawn to it like moths to a flame.It was the "the new place" to be seen. A destination for Lisbon ladies who lunch after a fitting or a spot of shopping.Their game given away by the profusion of Paris Lisboa carrier bags packed full of Claus Porto guest soaps on the floor beside the tables. If Eça de queiroz was alive today this would surely be a restaurant frequented by the characters of The Maias.
I don´t even know where to begin. The menu is full of surprises. First you are given a sheet of paper and a pencil and you basically have to tick boxes to tell the kitchen what you feel like eating. SUCH FUN!!! and like tapas you can repeat this  process as many times as you want.
Some dishes are rather small but are all quite cheap, very elegantly presented and most importantly, all of them were unbelievably delicious!
We ordered the Alfacinha de bacalhau crocante, the saladinha de orelha de morcego( bat ear salad more on that story later) steak sandwich,tuna steak with polenta, the aged steak, a selection of Portuguese Charcuterie from his partnership with Manteigaria Silva Espargos e congumelos nas brasas com caviar de beringela fumada molho de iogurte com coentros e hortela ( Grilled asparagus with mushrooms and smoked eggplant. ) 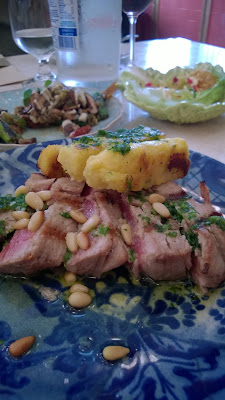 (embaixo)
The view of the ceiling above 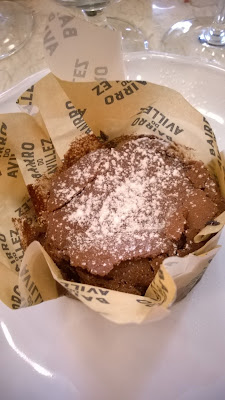 We finished with a selection of Portuguese cheeses
and the house chocolate cake baked in its own
Avillez branded baking parchment.All these dishes were cooked and presented in ways that are either very interesting or as twists on classic Portuguese dishes.
On top of that, the atmosphere is  buzzing and you can observe the cooks enjoying going about their work
just a pips throw away from one´s table! I can't recommend this place enough, at least for lunch, one of the best meals we have had in Lisbon but not cheap (we didn´t expect it to be ) but for a very reasonable price!
( esquerda )  Bolo de chocolate de taberna


Not everybody it seems was in agreement with us,in particular the Portuguese customers.I doubt this kind of criticism would be levied on Portugal´s national treasure Ronaldo,so why is this outstanding chef who has done more for his country culturally than kicking a ball around been knocked in this way.

This is what some of the most recent reviews have said about taberna...

"The staff are mostly clueless, as if, based on looks or something, they'd been dropped in there at random like in a survival-type reality TV show. The ugliest person there was the only one who seemed to know what he was doing".

"The customers were better dressed and better looking than the food"

It appears perhaps we were in a completely different restaurant as I can not identify with any of these complaints.This is a class act of creative modern Portuguese food and I would expect to pay the price for it.We will definitely be returning to continue where we left off and in particular for pica pau and the milho frito and some other great items from this extensive menu.Whats up next Snr.Avillez? 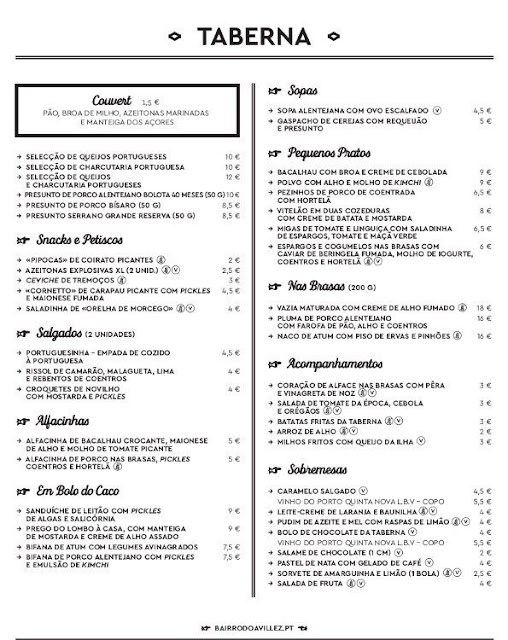 There he goes! He’s doing again! Opening yet another restaurant that is sure to be an instant Lisbon classic. Popular and respected Portuguese chef José Avillez opens a new restaurant in Chiado, near foodie favorites Belcanto, Minibar, Café Avillez, Pizzaria Avillez and Cantinho do Avillez. The casual venue is aptly named Bairro (“neighborhood”) do Avillez, featuring a variety of areas akin to your local neighborhood.

Read more at: http://portugalconfidential.com/bairro-do-avillez-cuisine-from-portuguese-neighborhoods-by-chef-jose-avillez/
There he goes! He’s doing again! Opening yet another restaurant that is sure to be an instant Lisbon classic. Popular and respected Portuguese chef José Avillez opens a new restaurant in Chiado, near foodie favorites Belcanto, Minibar, Café Avillez, Pizzaria Avillez and Cantinho do Avillez. The casual venue is aptly named Bairro (“neighborhood”) do Avillez, featuring a variety of areas akin to your local neighborhood.