I am casting my mind back to late August when Castro Marim was medievalised for five days.The days were long and the Knights were hot.Ambling through the streets I found a stall selling what appeared to be little pies.They were called pão do tesouro, and the stall purveying what turned out to be molten garlicky cheese breads made me relish them with
gusto.
It´s food like this,retro as a Rubik’s Cube that stands the test of time and I would say a good  fondue would give Sir Terence Conran´s chicken brick a good run for its money.And being on the money the times is right for the return of the fondue, but not as we knew it then.The mind boggles at some of the, shall we call them, activities that went on at seventies dinner parties.Images of strip poker games come to mind and reluctant guests having to forfeit an item of clothing if they dunked their skewer in the molten cheese and it came out devoid of the cube of beef that had formerly been on the end of it. No no no. I am suggesting we exchange the fondue set for a loaf of bread. Portugal has a long standing tradition,particularly in the Alentejo, with bread soups and many variants of the same to the point where it is no longer recognised as a soup.No native of the Algarve would disagree on the amount of different fish and seafood açordas that can be referenced. 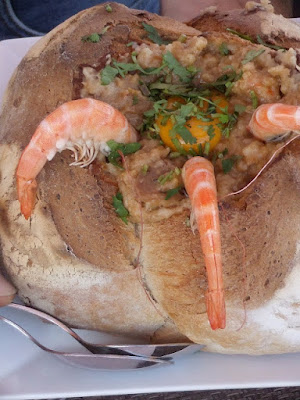 My favourite type is when it is made as a sort of porridge with bread and then served with prawns or sausage inside its own loaf.
There is a very old Portuguese recipe called "O Tesouro escondidinho no Pão"This literally translates as "The hidden treasure in the bread" The treasure you hide in it can be anything from vegetarian, fish, shellfish, sausage or even small macaroni type pasta.For my first attempt at this recipe I decided to go for a simple leek and cheese sauce.The cheese you choose can be anything from Taleggio, Ementhal, Raclette,Mozzarella, Gruyere or one of the one of the unctuous sheep milk cheeses from the Beira Baixa. You can eat them using a spoon, like  a Vacherin, but theirs has such a delicate acidity that in spite of all its richness they seem to dance over your palate. Queijo de Ovelha Amanteigado Curado these beauties are called. They are surrounded by a linen bandage as the rind isn’t strong enough to keep them in shape. This is due to the fact that the (untreated) sheeps milk is traditionally coagulated using the filaments of a local variety of thistles, cynara cardunculos instead of rennet.
"O Tesouro escondidinho no Pão"
makes 6
6 pão bijou or miniature bread rolls
100g alho Françes (Leeks)
2 dentes de alhosesmagado (2 cloves garlic crushed )
25g manteiga sem sal (unsalted butter)
1 colherada farinha (tablespoon flour)
150ml leite gordo ( full fat milk )
1 colherada vinho branco (tbsp white wine)
1 colher de chá mascarpone
50g chevre
50g parmegiano reggiano

Chop the leek finely.Sauteé the leek in the butter until glistening and soft.Add the garlic and cook for two more minutes.Remove the pan from the heat,add the milk and white wine and return the pan to a medium heat stirring constantly until the sauce thickens,stir in the three cheeses and some chopped parsley.Set aside to cool.
Meanwhile slice a lid off the top of each roll and scoop out enough dough to allow the bread to be filled with the sauce.When the sauce is cool spoon the filling into the bread rolls and replace the tops.wrap each bread in a piece of foil so it is completeley sealed and bake on a baking tray for 40 minutes at 180c.After 30 minutes remove the foil and lids. continue cooking them unwrapped for the last 10 minutes.Discard the foil but keep the lids warm.When ready remove the breads to aserving platter and replace the lids slightly off centre.Eat with gusto.

VARIATIONS ON THE THEME
As I said you can use any cheese you choose as long as it melts well. Your treasure could be bacon bits, chopped sausage, chouriço,minced beef or pork, prawn, small macaroni or baby gnocchi,but bear in mind you will need to choose a suitable sauce to pair with your filling.