8 years on...Porto. Whatever happened to ‘happily ever after’?

Whenever I arrive in city for short break,before I've even unpacked my pants I´m off to find the market.Its like team building for one, a quest for knowledge and a search for pointers to what is local produce in one particular region. Trawling the stalls and different halls is like a nano holiday in itself, but also for me its like an educational school trip.I slowly begin to build up a picture of what might form the cuisine of the region. Well markets aside, more on that story later. A first visit to Porto back in 2014 unearthed an enchanting city. Little did the unsuspecting visitor know what would be found eight years later...... A wolf in sheep´s clothing perhaps 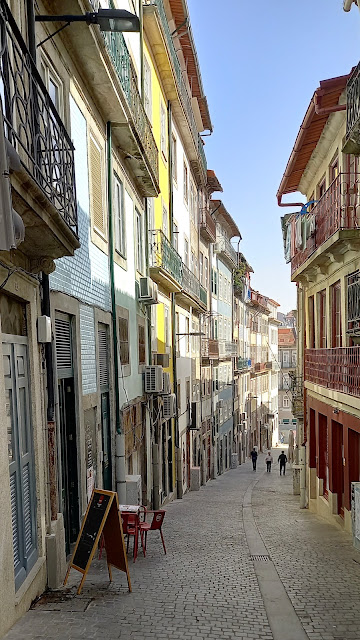 "Once upon a time" there was a thespian and his husband who ventured leisurely into the streets and discovered treasures that would stick in their memories until they returned. They were able to walk into quality restaurants without a reservation.They were very much at ease in a welcoming city it seemed. The people greeted them wherever they went and found time to hover at their table giving them the time of day. They encountered the odd walking tour that had to be stepped aside for, short of being pushed into the gutter. The downtown quayside, a mass of bars was overrun with throngs of tourists, clumsy service from surly waiters throwing the beer down in front of you and expecting gratuities. From the breakfast bar across the road they observed the queues awaiting their slot to get into The Lello bookshop famed for its Harry Potter staircase, but incorrectly cited as where JK Rowling wrote the first book. This was all manageable and they soon discovered some calm spots away from the centre where one could walk and enjoy  stunning river views from miradouros, and if you wanted real peace and serenity there was The Serralves foundation, just twenty minutes out of town with its meandering park and parterre garden, and even a tea house adjacent to a sunken tennis court, nestling on terrace almost hidden by overgrown wisteria They sat there imagining perhaps characters like Bibi Lacoste back in the 30s enjoying a relaxed game set and match. 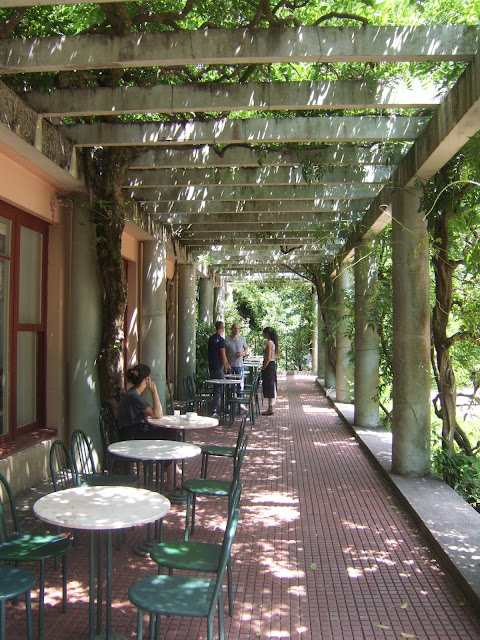 2014 always a mecca of calm... The Tea House at Parque de Serralves

"Once Upon a Time... Later." They still had wishes....the thespian and his husband, later to be joined by the brother and his wife face new frustration. ......They arrived at Sao Bento station off the crowded shuttle and were immediately jostled and butted by crowds,bearly making it possible to leave the station without getting their luggage caught up in some back packers legs. Customers were hanging off the rafters of cafes and restaurants overspilling onto the pavements. Not a good star,t but the saving grace was their hotel was just a stones throw away in what their fairy tale memory recalled an almost peaceful haven of calm with interesting smart shops old and new. Not so anymor,e every other building was a boutique hotel catering for all budgets. People were queuing for  trending "brunch" bars set amidst tacky candy shops, stores selling sportswear and purveyors of tourist tat.

The hotel was lovely apart from the shower curtain, but hey ho when drawn to the attention of senior management got them upgraded to a suite next door along the corridor."Its good to talk". Friends were waiting for them in the bar next door, coincidentally owned by the hotel, and they were able to unwind with one of the most delicious croque madame ever and a few bevvies Time  to spruce up and get together with the brother and his wife for dinner. Their choice of  first night restaurant, literally at the bottom of the street, was LSD not named after the hallucinatory Class A drug but an abbreviation of its location Largo Sao Domingos.This restaurant was so damn good back in 2014 that on one occasion they had chosen it as their lunch spot and came back for dinner in the evening, followed by a third visit on their last night in town.No expectations there then.When they had tried to book it online the week before it was telling them it was fully booked for the whole month of October. An occurrence that kept repeating itself every time they contacted other establishments for a reservation. What´s going on Porto? They resorted to phoning them direct and were told the very same tale by a very brusque witch who cackled "Only Portuguese or Spanish" and announced unapologeticically that they would have to come at 7pm and queue and then proceeded to slam the phone down. Never one for nonsense the thespian took the matter up with them via email. It was not long before the manager called and apologised, confirmed the booking and said he would make sure they were welcomed properly on arrival "Its good to talk".They were greeted on arrival by a handsome princely waiter with glasses of champagne on a tray.The food was delicious and service more than attentive. 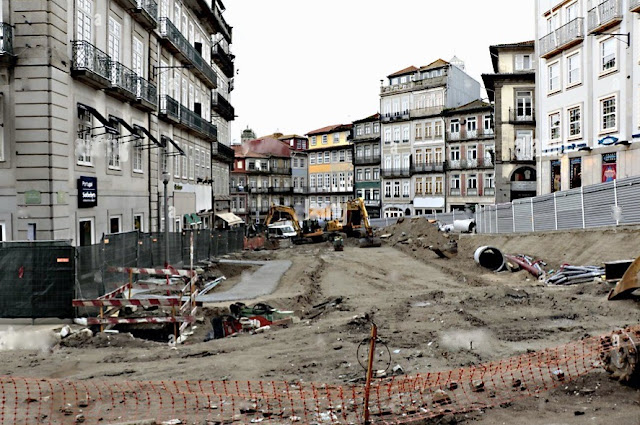 Day Two: It was like returning to your seat for the second half of Stephen Sondheim´s "Into the woods" These captive visitors with great expectations were not prepared for what was to happen next.... a steep dive into irredeemable bleakness and rapid descent from hope to (near) despair. What happened to the fairytale city they remembered? There were now big tall terrible cranes on the skyline. Exploration was hindered by construction work,renovations and tiresome detours to get to where you actually wanted to be. 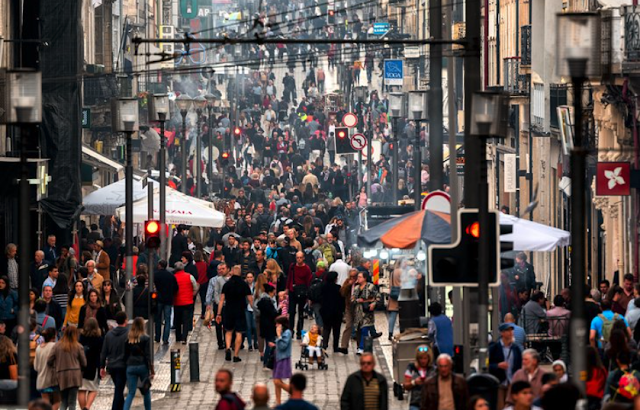 This was made even more tiresome by walking tour after walking tour brushing past and almost knocking them to the ground. They soon learnt that achieving the accolade of best city break comes under the spell of a price to be paid by its visitors .What happened to exclusivity. All in all they had a good time and the restaurants they did manage to secure a reservation in, not necessarily their first choices, came up trumps, serving some top whack food. In hindsight the analysis of their dining experiences on this trip would be summed up like this and restaurant owners should take heed.

There are 3 types of diners....local residents,out of towners touring and overseas tourists.It can be easy to underestimate the out of towner because the chance of repeat business is hit and miss and probably quite low. But the out of towner and the tourist has made the pilgrimage to a particular restaurant and the experience they take home is as precious as any souvenir.
If there has been an enjoyable experience these customers will regale stories about the restaurant sharing these experiences with friends and family face to face or via social media in much the same way we used to show slides and photos of our holiday when we returned home.If these individuals had a great meal and felt a good ambience they will become ambassadors for the restaurant spreading the word about the food wherever they go.
One special highlight of their trip was the visit to the newly restored Bolhao market. A stunning conversion from 8 years ago when one could not, because of lack of hygiene and maintenance even enter the chamber to spend a penny/ centimo.Now there is direct access from the metro,many stalls are geared up online to accept credit cards.An efficient information desk is forthcoming and practical and attractive shopping bags can be purchased for a small cost.It somehow seems strange though that the highlight was that visit to the requalified market.Well the narrator of this tale did start off by saying that the market is always his first port of call.
Overall Porto had provided four good four days,being shoved and jostled,having to take second best in  restaurant choices and ending up with them taking covid home and having to "get it off their chests"
It may well be another 8 years before they return unless someone assures them that building construction, redevelopment works and renovation have been completed and that they not have
to be diverted around corrugated fenced off craters in the middle of the city.