It seems there is currently an Ottolenghi epidemic and I for sure have succumbed to it. Everybody´s talkin´ Ottolenghi, and everybody´s doin´ the Ottolenghi.There´s no hokey pokey and thats what it´s all about. This is great because when I came to make his cauliflower cake,  ( one I had bookmarked earlier), I discovered others around the globe were blogging their version of this recipe, so I could compare notes. Each week I am champing at the bit for his saturday Guardian column,The New Vegetarian, almost 100% of his culinary column inches are about what I want to eat, maybe not on a saturday night but then I can bookmark it for later in the week. I am not a vegetarian and neither is Yotam Ottolenghi, but this is flagship modern vegetarian nosh. Cauliflower cake  is a  part of his ongoing campaign to give cauliflower, which he considers as versatile as the beloved potato, “some well-earned glory”. Ah, cauliflower is the new potato, and this is the new tortilla, lets find out. Here’s red onion plentiful parmesan  and signature Ottolenghi cleverness, like a springform lined with black sesame seeds, a bit of turmeric, minced rosemary and a big handful of basil. Showcase food that can only be described as clever, innovative, and a fantastic fusion of the unexpected. So how did I get on with this recipe? I worked hand in glove with a tried and  tested version from Smitten Kitchen NYC. I have to say I´m smitten with her pictures. I had changes to make like SK, but I did decide to go ahead with the full quantity of olive oil specified, even though it seemed excessive. It wasn´t at all, and I am  glad I did. However I had to agree that in this present economic climate, with the price of Parmesan what it is,  220g was definitely excessive. I plumped for 150g and made it up of 2 parts cheddar and 1 part parmesan. One other innovation .... I am not a great fan of sesame seeds, and  black onion seeds left me with a feeling of poppy cake, so I decided to line the sides of the loose bottomed tart with flaked almonds, which with cauliflower I think makes a great parnership.
Like his Surprise Tatin, now my favourite vegetarian recipe of all time, it needs to rest until the next day to enjoy its special moment. They both slice better and hold their shape when sliced cold.
With very little change, except substituting the goats cheese for Brie on some rare occasions, I have adapted this recipe into my own repertoire and  Casa Rosada´s vegetarian visitors are left wanting second helpings. Cauliflower cake will now join the ranking in second place.
If you haven´t already caught the fever, don’t worry, he’s got two  original cookbooks. For starters, Chargrilled broccoli with chilli and garlic, anyone?)
I carefully lifted my cauliflower cake from the oven after 45 minutes and - Cauli Gosh!!!
Get the bug guys, this is the way forward. Deeeelisssh!!!! 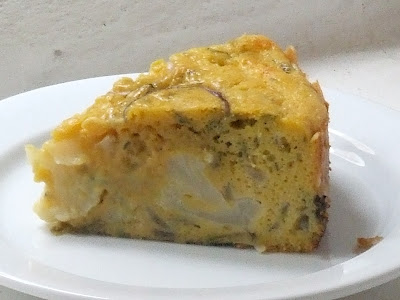