The secret was in the sauce

If you are looking for a many options menu, this isn´t the place for you. Everyone that goes to this restaurant eats Entrecôte, beef with a very clever sauce,this sauce is incredible, and a closely guarded secret. But it tastes so good that you will come back again and again, surely.
Served high and mighty on a gut-busting plate, entrecôte steak with a green aromatic sauce is the only thing on the menu at this high-ceilinged, Parisian-style brasserie. It’s more than enough for me. 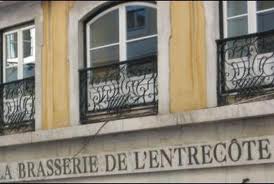 So this restaurant has a very limited menu - salad, steak, desser,t but what it does it does very well. Fresh salad, steak cooked exactly to your liking, as many frites as you can eat, followed by simple but delicious French style desserts. If it´s on the trolly you can point at it. Attentive, knowledgeable but unobtrusive service in a traditional brasserie setting - low lights, candles and huge mirrors. Well-chosen wines, many available by the glass as well as the bottle. The Brasserie de L’Entrecote is a rarity amongst French restaurants, which are usually renowned for their elegantly designed menus. Located in the heart of the beautiful city of Lisbon, this classic French restaurant has done away with the tradition of having a menu, which caused quite a stir when it first opened it doors to customers, and judging by some of its recent reviews cf. tripadvisor still does.
At the Brasserie de Lentrecôte, you are presented with a complete meal without ever having to order a thing. It begins with a starter, a choice of two fresh salads, one topped with walnuts,the other with cured salmon. It is sure to leave you wanting more.
Amazing what you can find on the internet with a little digging...
The best kept secret in Paris seems to have been unveiled.The Le Monde restaurant critic, Jean-Claude Ribaut, has subjected the sauce to chemical and culinary analysis. He claims to have penetrated the secret of Le Relais de Venise (271, Boulevard Pereire, at Porte Maillot in the 17th arrondissement) at last.
What is the magic ingredient which makes people queue in the rain outside a restaurant which has only one main dish and takes no reservations? The answer he says is "Chicken livers".Incidentally in the Lisbon re-incarnation they do take reservations and neccesarily so.
The sauce at the Relais de Venise - which now has a franchise in London - is composed, he says, of chicken livers, thyme, thyme flowers, white mustard, single cream, butter, water, salt and pepper. Unlike most French sauces, there are no eggs, no flour, no vegetables. M. Ribault says the secret of the sauce lies partly in how you make it. Dexterity is needed.
"Le Relais de Venise served the dish with a complex butter-based sauce containing tarragon, marjoram, dill, rosemary, thyme, basil, paprika, anchovies, and numerous other condiments and spices"
Now , if I could only find the correct measures...
Bon Apetite -enjoy your meal.
Email Post
Labels: something for the weekend