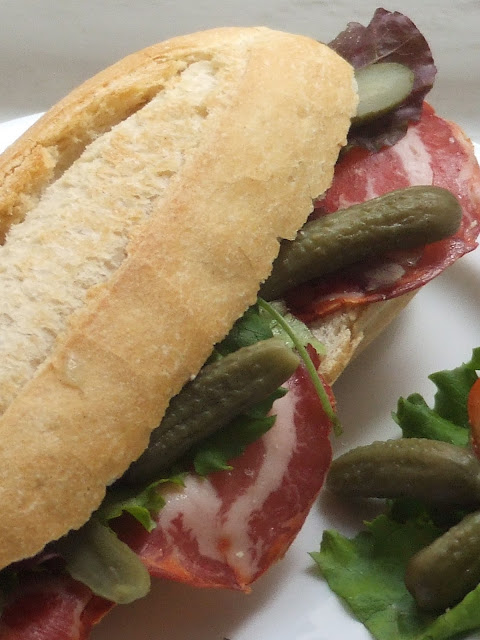 Pucker up
"To contract a facial feature so as to form wrinkles;
used especially of the lips when whistling or kissing"
Pucker up, people, and add a thrilling dash of sourness to your cooking.The world may have turned sour outside,but them gherkins indoors can sure put a smile on your face, and a lick on the lips.
Purse those lips - crisp and cold, can a pickle be too bold? No never.
The gherkin is a vegetable similar in form and nutritional value to a small cucumber. Gherkins and cucumbers belong to the same species They are usually picked when short in length and then pickled in jars or cans with vinegar (often flavored with herbs, particularly dill ( hence, "dill pickle") or brine to resemble pickled cucumber.The path of the pickle was passed by the Portuguese from West Africa to the West Indies.The original species was the Burr Gherkin,a funny looking cuke named probably because of its covering of prickly spines.Unless you live in the North of Brazil, you will find it hard to source. Its most common use is in the Brazilian version of the most typical Portuguese meat and vegetable stew, cozido. It is a rich stew made from shin of beef,chicken, spare ribs, belly pork Morcela farinheira and chouriço,cabbage, carrots turnips, rice and potatoes.
Pickled gherkins are one of my favourite accompaniments to other foods. When making a sandwich with cured meats, particularly salame I make sure I get myself a pickle in.
They were associated with central European and eastern European cuisine, but are now found more widely. Sometimes also called a cornichon (the French word for gherkin).They are also the perfect ingredient to pep up a potato salad.Add chopped up gherkin to creamy
peppery sauces for steak or cuts of pork.Why not do what I do, sneak up on the fridge in the night and steal some gherkins from the jar.Tempting.

Tuck in and savour the moment