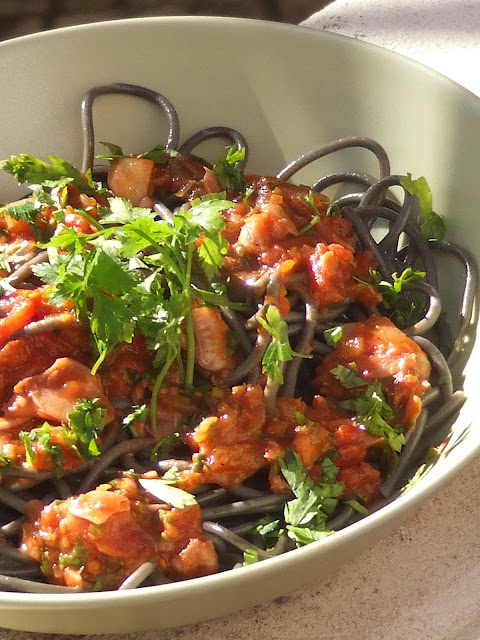 After the gluttony of the holidays many of us vow to eat better, lose weight, and exercise more. But the quickest way to fail our healthy resolutions is with a fad diet. We should enjoy the foods we eat and not be stuck with limitations, such as calorie counting and depressing "I can't eat that list" foods. Instead, embrace what you can have! Loads of fresh fruits and vegetables, healthier-for-you locally reared grass fed meats, hearty grains, and heart-healthy fats.While de-pantrifying in larder re-hab I unearthed a packet of squid ink spaghetti. How long it had laid dormant at the back of the shelf I shudder to think.Perhaps it was a house warming present, if so it had been there for 6 years.One of the missions of my larder re-hab was to eat the cupboard bare and then start from scratch.Before I set about searching for a recipe for esparguete preto (com tinta de choco) I had to remind myself that in the days before the Germans took over a high percentage of the packaged Italian food industry (  I checked the packaging details and found the product was German and produced in the North of Italy near Bologna ) we would never have encountered this variety of dried pasta.Furthermore there is a more traditional way to prepare this dish.The freshest uncleaned squid is purchased from the market. When cleaning the squid one sets aside the ink sacks ( being careful not to break them)The ink sacks are then opened and the ink collected in a bowl.When it comes to  boiling the  spaghetti the reserved squid ink is added to the cooking liquid resulting in a black tint being given to the spaghetti, without adding any flavour and merely adding an aesthetic effect. Back to my mission, with a packet of pre-manufactured black spaghetti, ( something I would never have purchased)I had to find a recipe. I was guided by colour,I wanted a strong red sauce to strike a contrast with the black pasta and create a dramatic impression on the plate.
Before long I had found a recipe in a back copy of the much loved and  sorely missed  Portuguese magazine Blue Cooking.The recipe was "Black penne rigate di seppia Rustichella dàbruzzo with smoked salmon and white asparagus" and  was featured in the November 2007 issue. It was my inspiration, but not my answer.It lacked the colour and dynamic I needed to create a dish of distinction.I thought of Tuna but there would have been even less contrast than the sharp pink of the salmon.Prawns then came to mind.If I were to combine prawns, chilli, lime a strong fresh green herb and the vibrant red tomato sauce I would be bringing together some of my favourite flavours and at the same time be making a colourful statement on the plate.Serve in bowls that will show off the Black spaghetti and its sauce to create a colourful dish.
Esparguete preto com camaroes malaguetas,lima e coentros
( Black spaghetti with prawns,chilli lime and coriander)
Serves  2
500g /1lb 2oz tin of imported Italian tomatoes (Cirio)
well drained and coarsely chopped
1tablespoon extra virgin olive oil
Flor de sal
250g black spaghetti
250g raw prawns
4 shallots,chopped
olive oil
medium red chilli peppers deseeded and chopped
grated zest and juice of 1 lime
Generous handful of coriander or parsley
Put the tomatoes and olive oil in a pan,turn the heat to medium-high,add salt,stir and cook the tomatoes down until reduced by half.Set aside.In another frying pan add some olive oil and fry the shallots till softened but not browned, introduce the chillis and continue cooking for another minute.Combine the previously cooked tomato sauce and stir in the prawns, Cook until the prawns turn colour and become fully pink.Stir in the zest and juice of lime and a generous handful of coriander or parsley.
Email Post