Oh crumbs - do you know your migas? 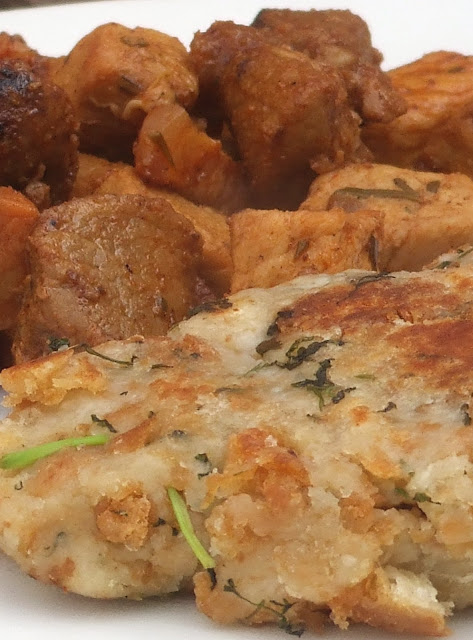 Migas derives from the verb “migar” which generally means to crush or to break up  bread in sauces.Migas also means "crumbs" in Spanish. So taking its origin as a Spanish and Portuguese dish consisting primarily of day-old bread crumbs soaked in oil and water, seasoned with spices and then fried with Chouriço and bacon lets see what treats are on offer.The Oh so English Bubble and squeak is first to spring to mind because of its close affinity as a left over dish.Not a leftover dish, but Irish Colcannon is another.
Like açorda,migas are peasant dishes packed full of flavour and goodness,in spite of their lack of elegance.The dividing line between açorda and migas is fuzzy and may depend only on regional variation, although generally migas tend to have a different texture and to be drier. In some places making migas(fazer migas) just involves soaking crumbled Broa ( corn bread) in milk or water.It can also be prepared with potatoes in lieu of bread. Spanish or Portuguese migas recipes start with pieces of crumbled bread. These are sprinkled with water and allowed to soak in the moisture, the bread is then fried in a pan with oil, spices, and garlic until it is browned. The last step is the addition of any other meats, vegetables, beans, or rice as desired.Originally a breakfast dish, but like so many peasant dishes it has now been re-invented and is making many an appearance on the menus of smart city restaurants across the globe, where it is now  commonly served for lunch and dinner,usually as a side dish or accompaniment to the main attraction.Lets face reality, we are all peasants at heart and enjoy eating this sort of food, or at least the press and jornalista foodistas get much pleasure from telling us we do.
As a homely  breakfast in southern American states,it has another horrendous left-over incarnation as part of the Tex Mex cuisine, made with eggs, corn tortillas and salsa.I fear I might rekindle the Alamo, so before I start another Texan revolution lets quickly pass on that one and for a moment go back to its proper Iberican roots,as a breakfast dish.
Lets look at the the way the French do it. Be it coffee, tea or hot chocolate. It is easier to dip your croissant or your tartine (buttered bread)into a bowl not a cup. Besides, one needs a good breakfast to start the day and coffee cups are too small. The origin of the bowl comes from before coffee and chocolate were brought to Europe, when it was soup that was drunk for breakfast in those bowls. They kept the bowls and changed the liquid.

Simply soak crumbled broa in black coffee,then serve very hot,in a small bowl sprinkled with sugar.Serve this alongside the most gorgeous figs you can lay your hands on and eh voila - nouveau petit dejeuner or as we say in Portugal novo pequeno almoço.Gosto immenso.Bom apetite.

Migas is the ultimate leftover dish but with a little imaginative playing with the standard ingredients, it can become an exceptionally elegant and inventive dish.
In addition to the olive oil and garlic common in the Spanish variety of migas, the Portuguese version can include coriander, red pepper paste, tomato,sweet potato and chestnut.
There are many regional variations but since I always have some chorizo and toucino or pancetta in the fridge, this is the version I usually cook.It is the most aromatic of bread dishes and a big Portuguese favourite.It is extremely easy to make
Migas Alentejo style( Migas Alentejanas)
Serves 4

Process the garlic and coriander or even better crush them together with some salt in a pestle and mortar.Place this pulp in a large mixing bowl or tureen,add the boiling salted water and the olive oil.Break the bread into small chunks and add to the bowl.Knead it together well with your hands until it resembles the texture of mashed potato.Leave it to soak well.The longer the better.If you have time it could be overnight.
Chop the bacon into small pieces and fry slowly until all the fat has been extracted from it.Set it aside.In the same fat fry the garlic,chouriço and the pork,cut into 2.5cm(1in) cubes.Season well with the paprika and some salt.Keep turning the meat until it is ready(10 to 15 minutes max).Put the meat aside, keeping it warm and reserve the pan fats and juices.Put the bread mixture( migas) into the frying pan containing the juices and fat from the fried meat and raise the heat.Fry the migas until it has aquired a golden crust.Serve it surrounded by the meat.
If you are following the Spanish rule book then it is traditionally served with a fried egg on top.For a slightly different take on this, and always a guaranteed good read, try fellow blogger Marmaduke Scarlet´s version.I never cease to be amazed by what she can magic up with some breadcrumbs.