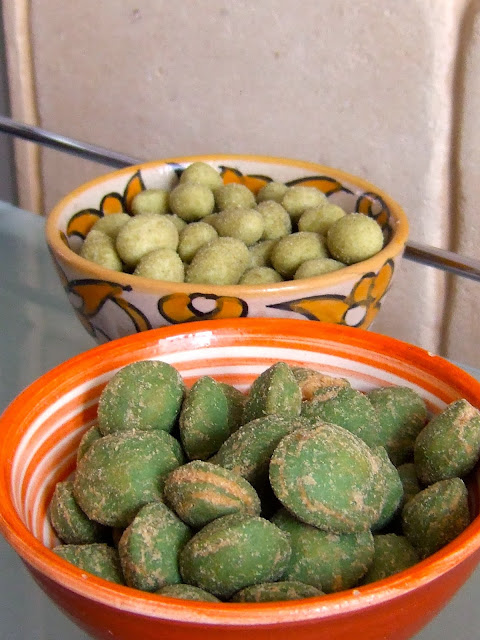 One of the top food prediction trends for 2014 is more "extreme"spice being introduced into potato crisps and other snacks.Well I thought I would get ahead of the game and give it a go. I have always been nuts about wasabi, so I had a stab at "wasabifying" some nuts to accompany our guests drinks during the seasonal festivities.Alas I abandoned the result.The wasabi lost its dash in the drying process producing a rather poor cousin to the wonderful commercial versions out there.Wasabi is renowned for triggering unique taste-bud receptors that don’t otherwise respond to anything else and I certainly did not achieve this.Defeated twice and out of "frustration", I put my best foot forward and schlepped to my favourite Portuguese deli and bought a bag of beautiful Amendoins de Wasabi,picantes & saborosos.I wanted to see if they used anything else that had not been significant in the recipe I had used.Sure enough, just as I suspected they contained soya.This must be the secret I thought.I then bought a packet of wasabi coated peanuts from Lidl.The ingredients listing showed no soya but that a lot of flavour enhancing was going on, giving the peanuts less purity and slightly chemical after taste.
Well I am throwing the ball into your court dear readers so here´s one for you.How do you coat almonds and peanuts in wasabi and keep them spicy and crunchy? (a wasabi paradox).The world may have turned sour outside,but you and yours indoors are going to pucker up a few peeps faces, put a smile back on them and a lick on their lips.
Just for a change I am giving you the idea and now you have to execute it,then tell me all about it,how´s that for a New Years resolution? Looking forward to hearing how you get on and if you send some to Casa Rosada we will do a taste test and publish the best “wasabifications” on the blog here.
Here is how I tried with two attempts to spice up standard salted nuts with these two recipes for wasabi-crusted peanuts. The green shell is made with a combination of beaten eggwhites, wasabi powder and wasabi paste.My attempts were just mildly "Wasabiesque"

Heat the oven to 170°C (150°C fan-forced) and line a baking tray with baking paper.
Rub the salt and peanuts together in a bowl and then place in a sieve to remove excess salt.
Lightly beat the eggwhites and gradually add the wasabi powder and cornflour. Stir in the wasabi paste. Add the nuts and then spread them out on the baking tray and dry in the oven for 40-50 minutes.

SECOND ATTEMPT
1 tablespoon water
1 lb natural almonds (brown skin on)
2 tablespoons wasabi powder
2 teaspoons coarse salt
2 teaspoons cornstarch
Preheat the oven to 275°F.
Line a baking sheet with Release Foil or lightly greased foil or lightly greased parchment paper.
Whisk the egg white and water together until foamy.
Add almonds and toss to coat.
Place almonds in a sieve to allow excess egg white to drain off toss lightly as you are draining them.
Stir together the wasabi, cornstarch & salt in a large bowl or zip lock plastic bag.
Add almonds and toss to coat.
Spread the almonds on the baking sheet single layer and bake for 30 minutes.
Let cool completely.
Serve now or store in an airtight container for up to a week.