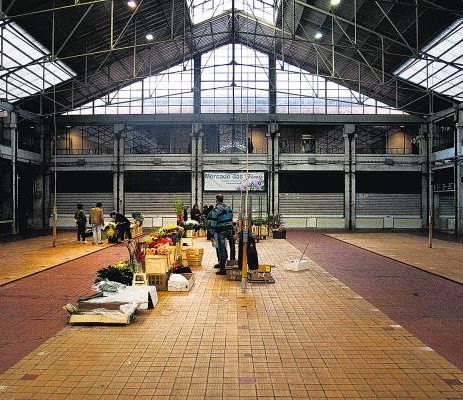 
I now can not visit a city without searching for a food story to bring home and blog about.We have just returned from Lisbon, and yet again found many new projects of interest.In advance of our trip we had read many column inches about the excitement surrounding the renovation and restoration of one of Lisbon´s finest (in my mind) institutions,the Mercado da Ribeira, the capital´s largest (10 thousand metres of covered area) food market.
This magnificent symbol of the commercial development of a bygone era has been Lisbon’s main food market since 1882.Over the years the market has undergone change in the form of extensive renovations and expansions.Originally set up as a wholesale outlet,it changed to retail in 2000.
And again this year another surprise was in store for this grand emporium of fresh produce.One of the food halls had become redundant and here was a trick not to be missed.While searching for new premises to house their headquarters, Time Out saw the potential of this empty space.
In May its doors once again opened  to the reveal that Time Out Lisboa had transformed it into its current status as a foodie paradise for gastronomes and shoppers alike.

The Mercado da Ribeira in Lisbon was completely refurbished and opened earlier this week with a new concept that puts the publishing project of the magazine Time Out Lisbon in three dimensions. Ie everything that the magazine will be published in the new space: food, culture, leisure and commerce. Is now called Time Out Mercado da Ribeira. - See more at: http://translate.googleusercontent.com/translate_c?depth=1&hl=en&prev=search&rurl=translate.google.pt&sl=pt-BR&u=http://www.viajecomigo.com/2014/05/21/time-out-mercado-da-ribeira/&usg=ALkJrhhb2eU_FHIAvfCU4gqJ_dzXcvLU_Q#sthash.E4gtlW4U.dpuf
The hall has been completely refurbished and now has a brand new concept that brings the pages of Time Out into a third dimension.What was formerly only available "in print"
was now available to be purchased on the shop floor.
Everything that was food related in the magazine is now "published" in a new dimension. Food, culture, leisure, and commerce and it is now called Time out Mercado da Ribeira.
We set foot from our bed and breakfast,Teatro,in Rua da Trindade on a voyage of discovery that would transport our imaginations  to another era and then back to the future.

2
1 The Mercado da Ribeira in Lisbon was completely refurbished and opened earlier this week with a new concept that puts the publishing project of the magazine Time Out Lisbon in three dimensions. Ie everything that the magazine will be published in the new space: food, culture, leisure and commerce. Is now called Time Out Mercado da Ribeira.
- See more at: http://translate.googleusercontent.com/translate_c?depth=1&hl=en&prev=search&rurl=translate.google.pt&sl=pt-BR&u=http://www.viajecomigo.com/2014/05/21/time-out-mercado-da-ribeira/&usg=ALkJrhhb2eU_FHIAvfCU4gqJ_dzXcvLU_Q#sthash.E4gtlW4U.dpuf
Having spent the morning in Principe Real Nuno Gamafying the thespian and going up another notch on the credit card it was my turn for a shot in the arm. When push comes to shove food is my nirvana,so schlepping on down to the waterfront our first encounter was passing by by a fashion store where Rebecca Ferguson´s  anthem "I Hope" was blasting  the entire travessa, spurring us on to our destination.It´s resonance just missed the pitch of Amalia, but nevertheless was a firm reminder that if La Rodriguez was alive today perhaps this is what the street might have resonated with then.Onwards down Rua do Alecrim,leading us hopefully not into temptation. 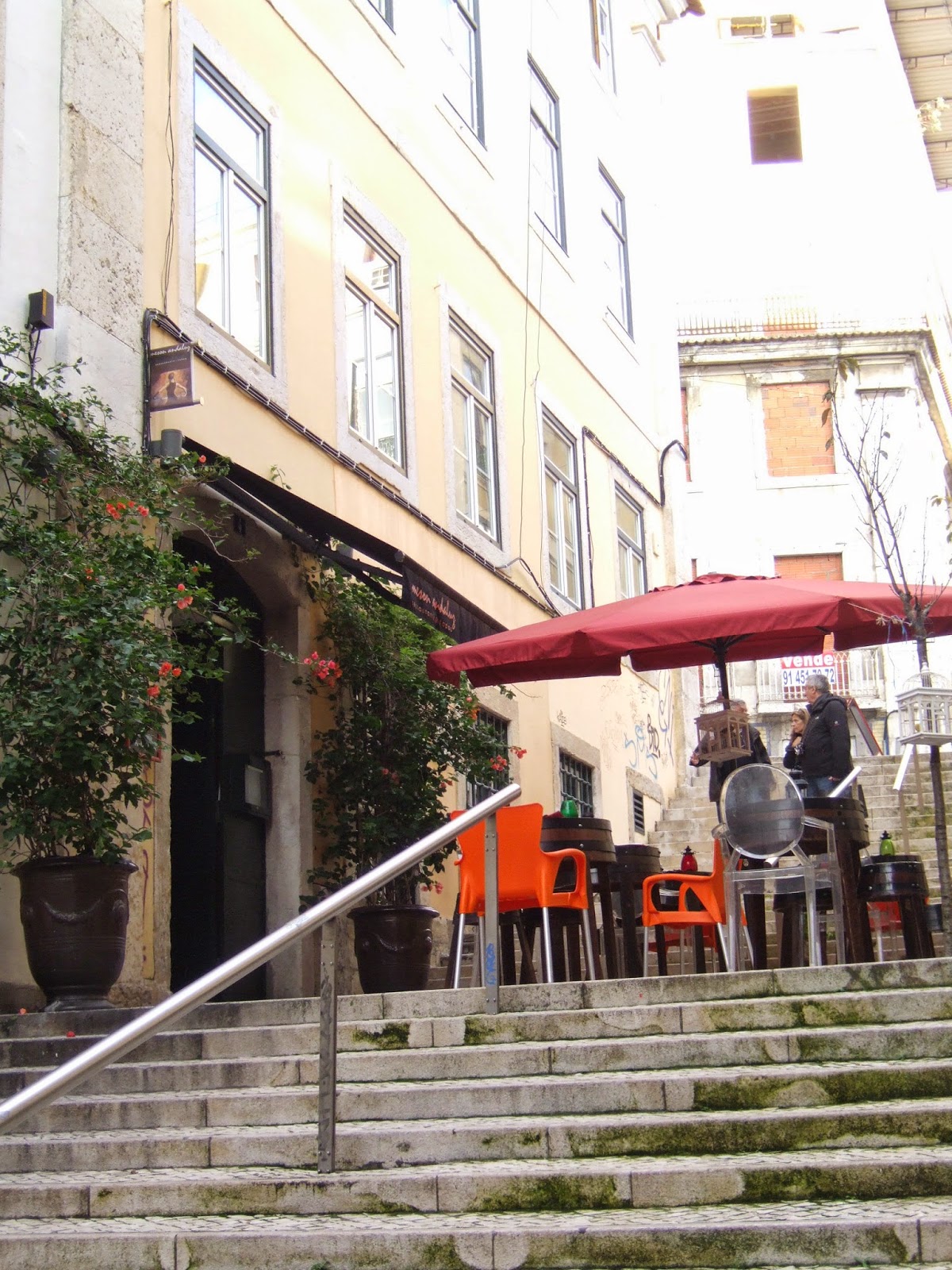 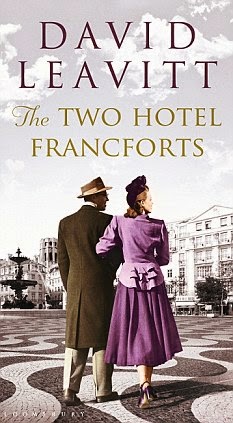 Meson Andaluz with its mis-matched Philippe Starck chairs,precariously perched on steep steps beckoned with its mouth watering selection of tapas.There was enough here to make even the Spanish make the journey over to Portugal to savour the menu.Time was tight and we could not succumb to temptation.We were on a mission and I happened to mention to the Thespian that this was the street where a notorious brothel featured in David Leavitt´s book The Two Hotel Francforts. Lo and behold by accident we stumbled upon the very building, now called ‘Pensão Amor’. Once this was a cheap pension with rooms rented by the hour to prostitutes and their clients or gentlemen of the city and their illustrious mistresses to enjoy a short afternoon of gratuitous rumpy pumpy. 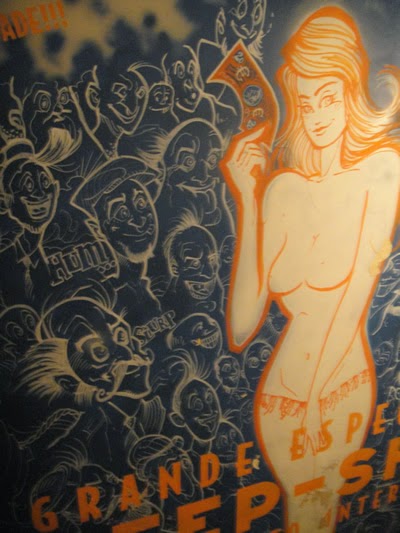 Instead of its former clientele of sailors and prostitutes now the occupants of the rooms, which can be rented by the day or month, are artists, or simply people with projects that needed a temporary space.Much of its former glory has been kept intact. Even the bathroom walls tell a story in the wonderful graffiti on the walls.It all makes you believe that this place was once without doubt very well attended.I loved too the the mis-matched velvet upholstered furniture,most certainly salvaged from the original boudoir of the bordelo.
The staircase has paintings depicting images of scantily clad ladies in erotic poses and there is still even a bidet and a washbasin with tile floor in the corner of one of the rooms.The rest of the space works as a bar and cevicheria (where you can eat ceviche and other exotic Peruvian specialties).We didn´t explore this but it sounds like raw fish and lime every which way.‘Pensão Amor’ is now one of the most popular bars in Lisbon.There is also an erotic bookstore and trendy hair salon..Wait for this,in hommage to its former debauchery there is even a pole dance room decorated in leopard and gold. Pole dance workshops are held here and  you might be lucky enough to learn the tricks of seduction…There is enough entertainment here to keep you going all night if you wanted to,and the option of refreshments too. 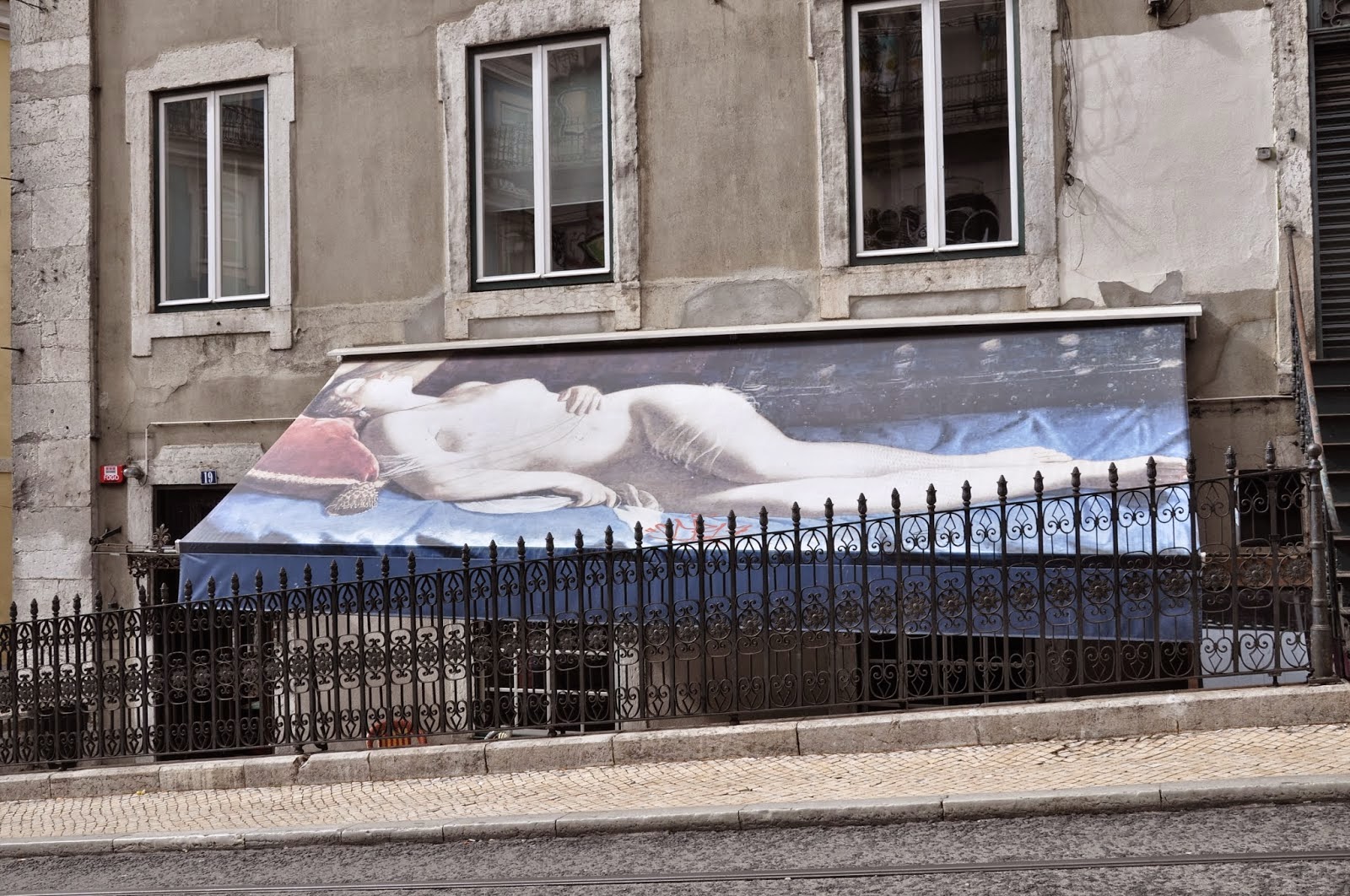 An alluring awning,a subtle reminder of its history
Don´t get me wrong there is nothing seedy about it, just a clever tongue in cheek salute to the history of the building.Leaving the rejuvenated brothel behind us we then penetrated the heart of the former red light district 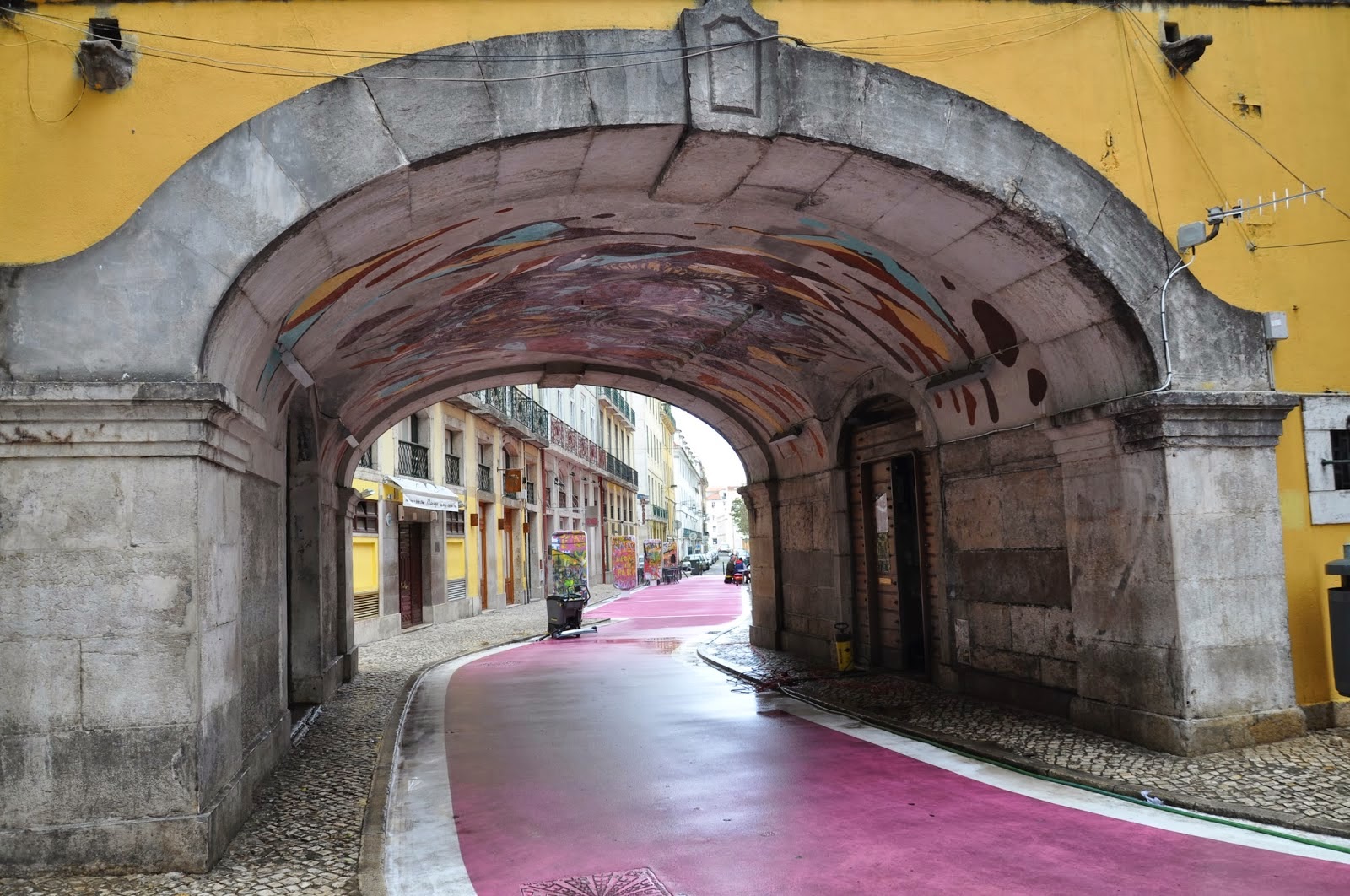 Rua Nova do Carvalho (Pink Street), located just behind our final goal, the famous market on the river. For decades this street housed bars  named after northern European capitals (like Copenhagen,  Oslo or Roterdão , Rotterdam) to attract the sailors who stepped off their boats at Cais do Sodré. Nowadays it has a pink carpet and has been transformed into a hip and trendy area lined with hip bars and clubs that become crowded after 2AM when the bars in the legendary area Bairro Alto start to close.After all these interesting and exciting distractions would we ever get to the market -  and how excited would I be when we finally got there? Coming up next on Time out Mercado da Ribeira the inside story.....