Time Out Mercado da Ribeira,the new kid on the block 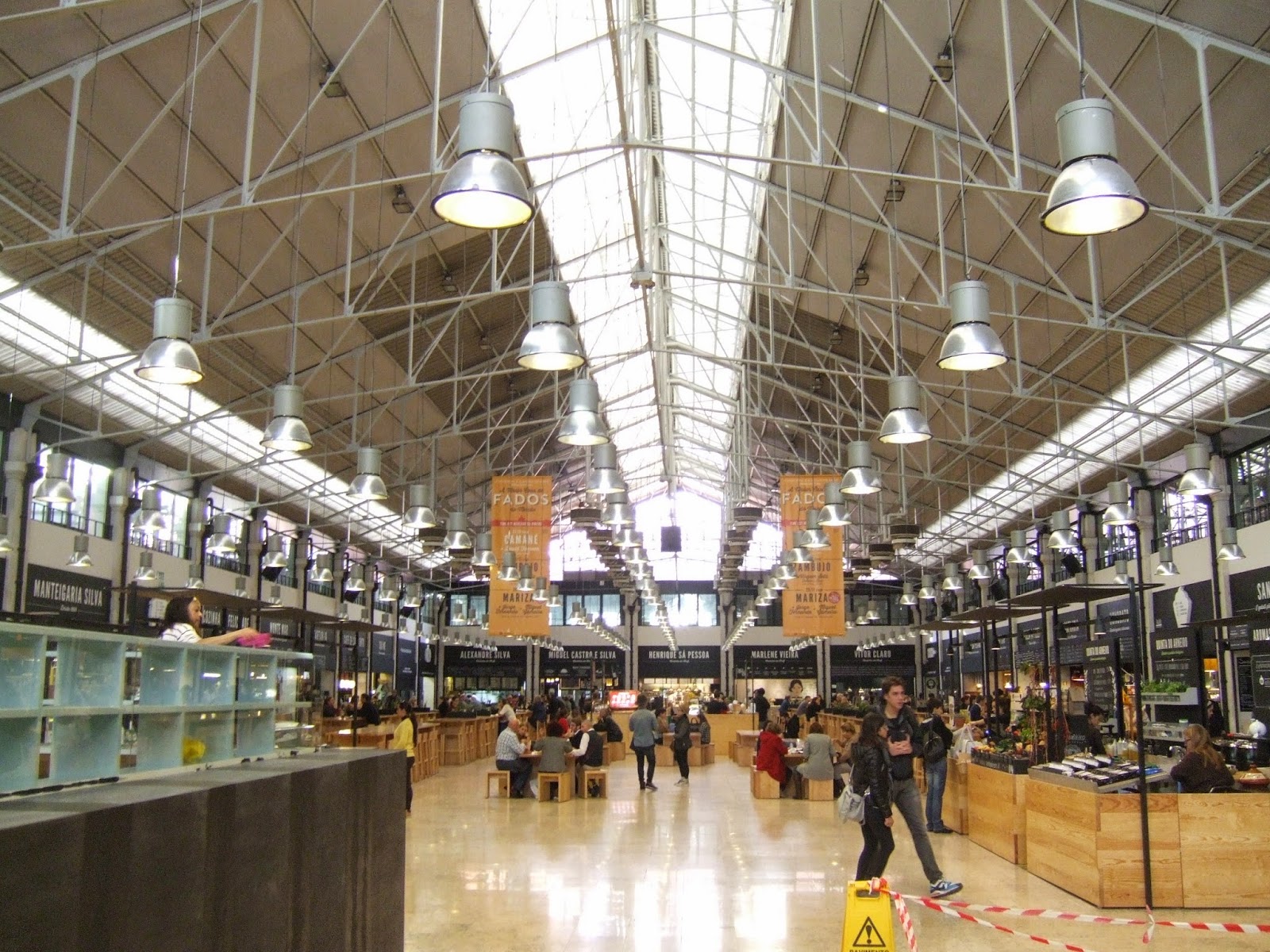 ...Back on track we turned a corner and there she was in all her glory, the Mercado da Ribeira with its new kid on the block, The Time Out Mercado da Ribeira.It was lunchtime and normally this would be a bad time to visit a food market,when all the stalls would be closing for the day.As it transpired it was one of the best times to go.
As we passed through the original central hall this indeed what was happening,the traders were shutting up shop for the day,but next door we were thrown into the hurly burly of a Lisbon lunch hour.Office workers and shop assistants alike were enjoying a novelty new lunchtime experience. 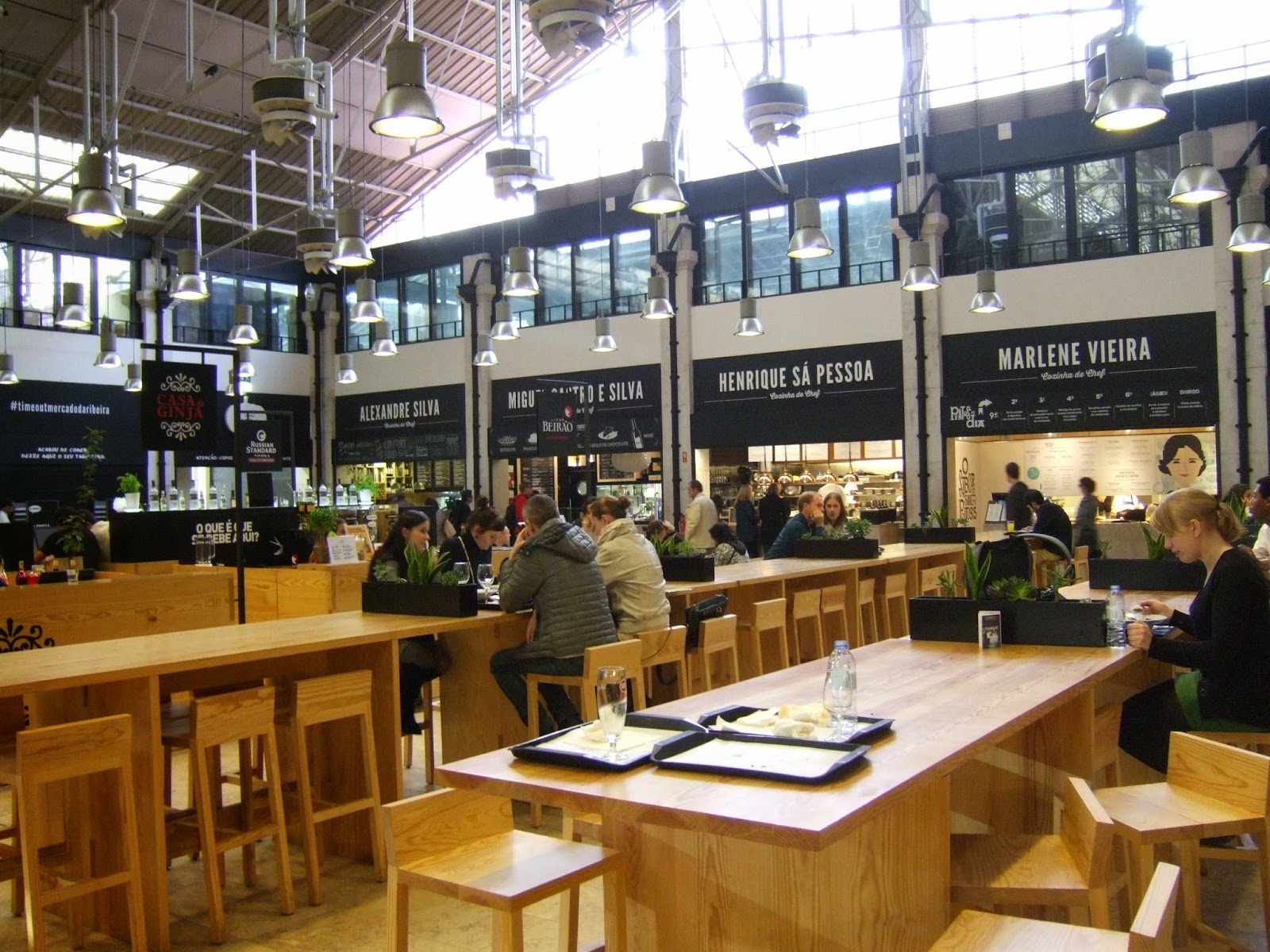 choose your outlet grab a tray a pull up a chair
Here was fast a food Michelin Star heaven.Lisbon´s finest restaurants and their star chefs were now able to make their food accessible to those who could perhaps not afford the luxury of fine dining and all that goes with it.The choice was immense, with almost thirty foodie outlets and one did not have to worry about getting a seat.With rows of sharp-cornered, light-wood tables and stools spread out down the middle, the Mercado da Ribeira is now no longer a place just to buy ingredients. Now it is a place to meet, sit and eat. Here were "shop-fronts" for restaurants, bars, posh burger joints like  Honorato (one of the first burger restaurants to take advantage of the burger craze in Lisbon), patisseries and cafes serving a tasty mix of Portuguese and International dishes.The new clientele that sat around us, one would imagine, were the now-grown-up kids who used to go produce shopping here with their parents. 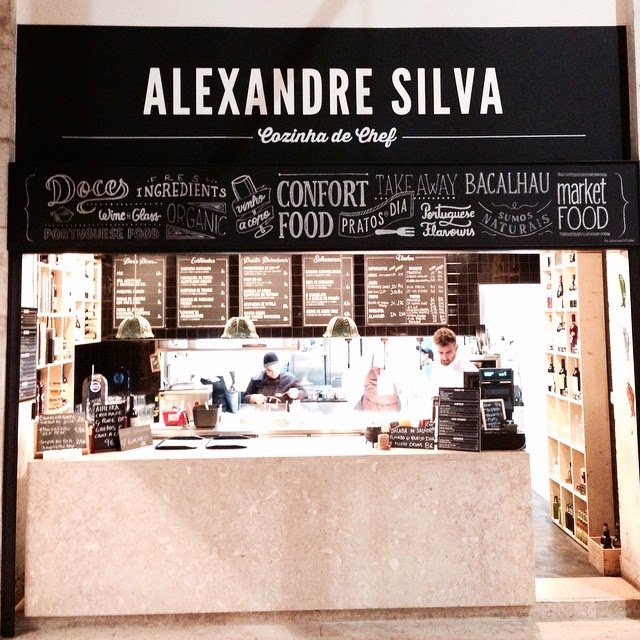 Here was a showcase for Chefs such as Alexandre Silva´s celebrated sushi and contemporary Portuguese dishes from Bica do Sapato. The hippest restaurant in Lisbon for over a decade and still the place to see and be seen. It's known for being co-owned by actor John Malkovich, but has remained popular mostly for its excellent gourmet cuisine and attractive minimalist space, coincidentally along the waterfront from the Mercado da Ribeira in a renovated riverfront warehouse by the The Santa Apolonia train station.Silva was already almost at the top of his game at the five star Alentejo Marmaris Hotel and Spa when he stayed here at Casa Rosada in 2013.After a complete reccy of all the 35 outlets in the hall it was time for some sustenance.First up the usual protracted decision making.We were tempted by finger licking innovative burgers, 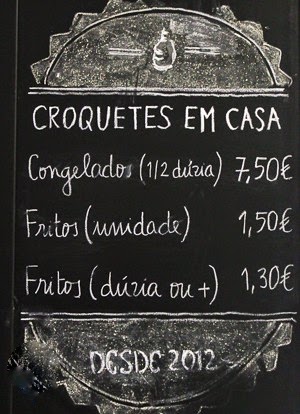 transitional Portuguese croquettes or posh as all get out cheffy stuff from Vítor Claro, Miguel Castro Silva, or Marlene Vieira. My eye was drawn to some fine fine presunto salad served in an ice cream cornet from Manteigaria Silva? I think they were actually free samples but never one to miss a new trick I filed it in my back head. 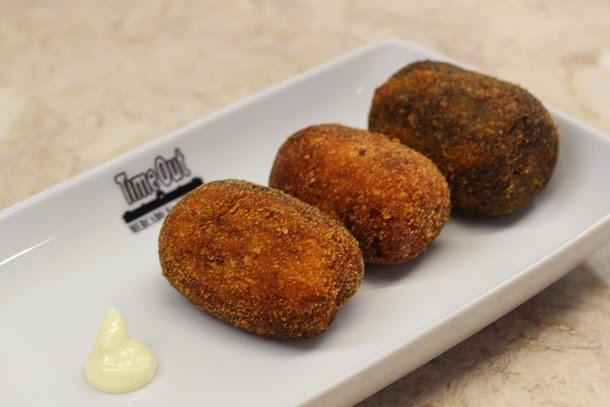 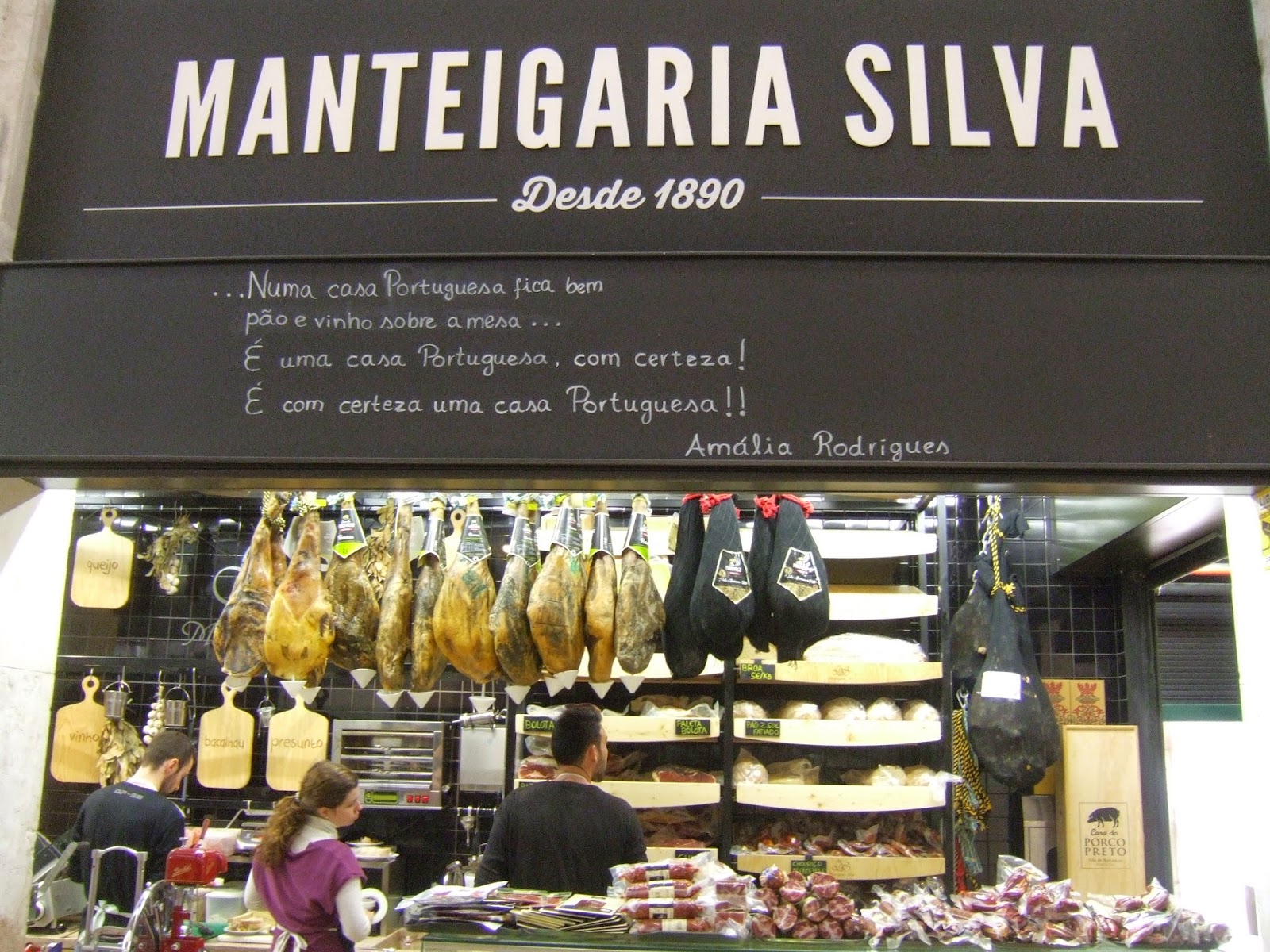 However the more familiar Henrique Sá Pessoa seemed an obvious choice and his endearing menu represented some really clever and interesting fast food takes.
The best thing about this space is a group of friends can take whatever they want and meet at a table.You can mix and match and there is something there that will suit even the fussiest of eaters.If one person wants pizza but their friend prefers fish, and there are vegetarians amongst you, no problem.We were meeting up with four friends and this is exactly what we did.The majority of the party went for the Pessoa option and the thespian and I opted for suckling pig sandwiches in soft wodgy baps. I forget which stand they came from, but they were to die for, and I died I did and went to hog heaven. Perchance there was a bar just a short schlep from our table and bottles of Prova Regia Reserva at €11 a bottle seemed to be the order of the day. We volunteered to sit wide on our high chairs and keep an eye on small items such as purses and bags while our friends tottered off to make their choices.They soon returned armed with what appeared to be a state of the art kitchen timer. 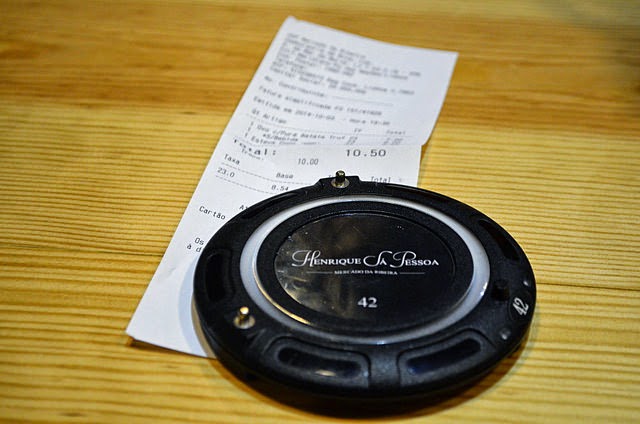 A small, black disc about the size of a paper weight, that they had been assured would ‘go off’ when their meal was ready.Indeed it did and in due course went into neon flashing and buzzing overdrive. 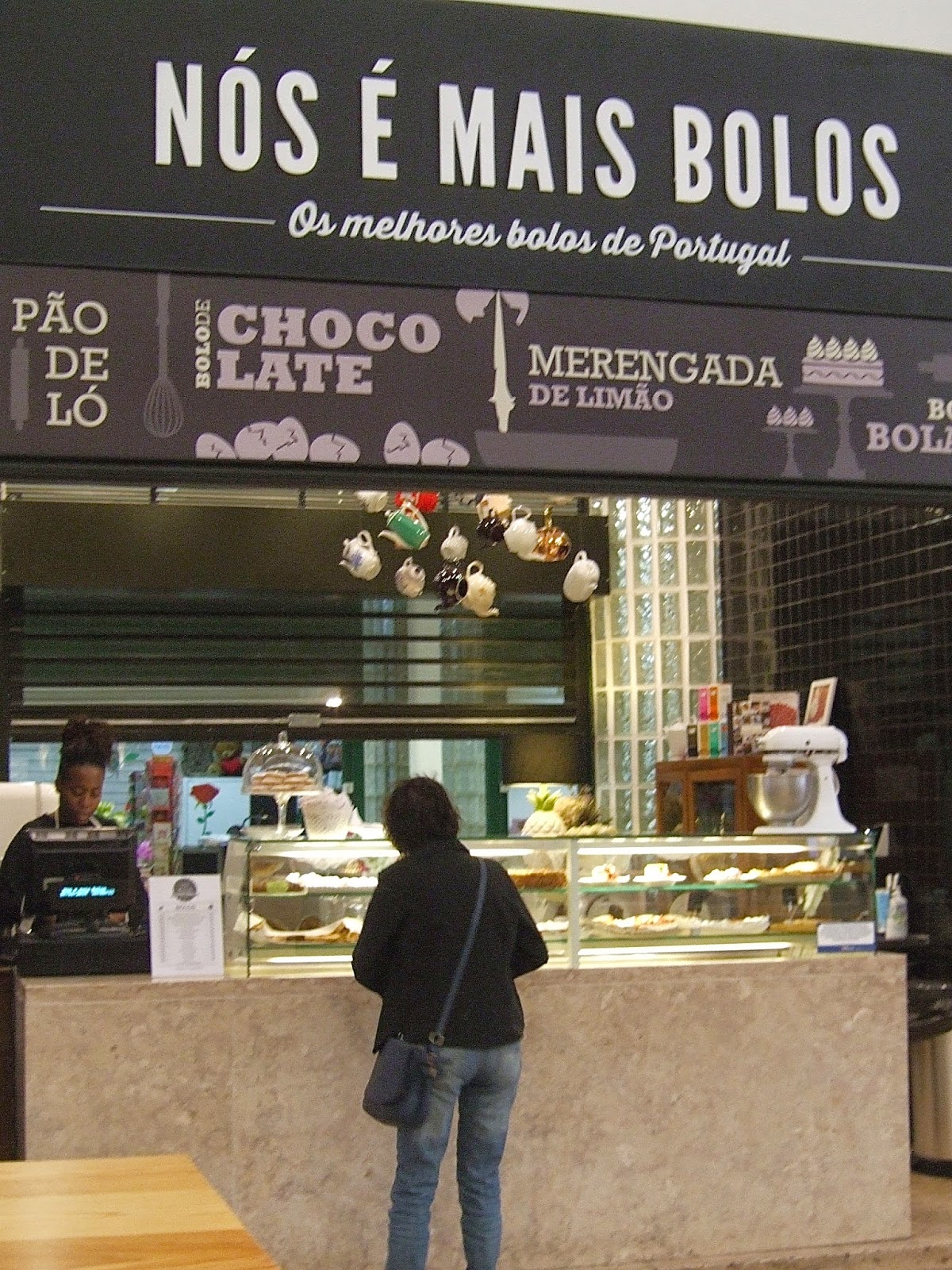 Now we were enjoying all the fun of the fare and we had to explore the pudding options.we didn´t have to venture far before we found Nós é mais bolos with its wonderful hanging mobile of teapots.We ordered a chocolate cake and probably the best cheesecake ever ever, with real home made strawberry jam on top.Could it get any better?
All the he best purveyors of Portuguese product were there.This was surely the best foodie experience any city can offer. 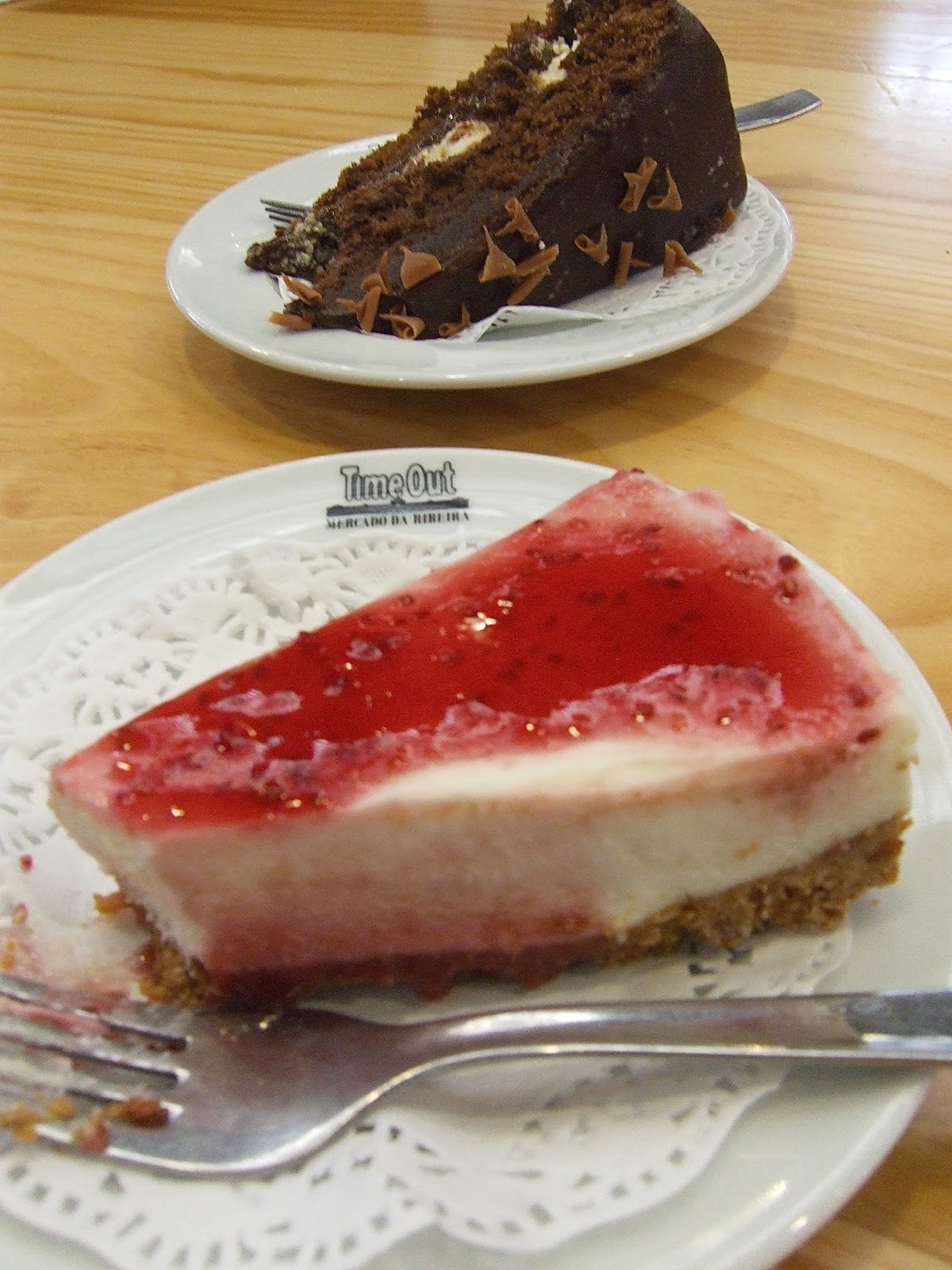 Well-known stores like Conserveira Nacional and Garrafeira Nacional as well as Arcádia (one of the oldest chocolatiers in Portugal, founded in the 1930s in Porto, which still makes some of the best chocolates in the country), Santini (probably the best ice-cream in the world! and the new ones that are making an impression around Lisbon such as Sea Me,  Prego da Peixaria (some absolutely delicious modern takes on the Portuguese prego.The traditional steak sandwiches are there, but now introducing the more modern salmon or tuna sandwiches with an eye opening option of having it served in a black bread bun.I could enthuse forever.I was beside myself with excitement discovering this truly inspiring space.I would have liked to have tried Lab by Asian Sushi Café,there was so much more to be explored and I am sure this venture will go from strength to strength.
This is the perfect place to grab a quick bite or linger and delve deeper into a gourmet experience.
Mercado da Ribeira won't be a best kept secret for long. The in your face Time Out Lisboa branding tells you that much.
Time Out Mercado da Ribeira
Sunday to Wednesday from 10am to midnight
Thursday to Saturday from 1am to 2am