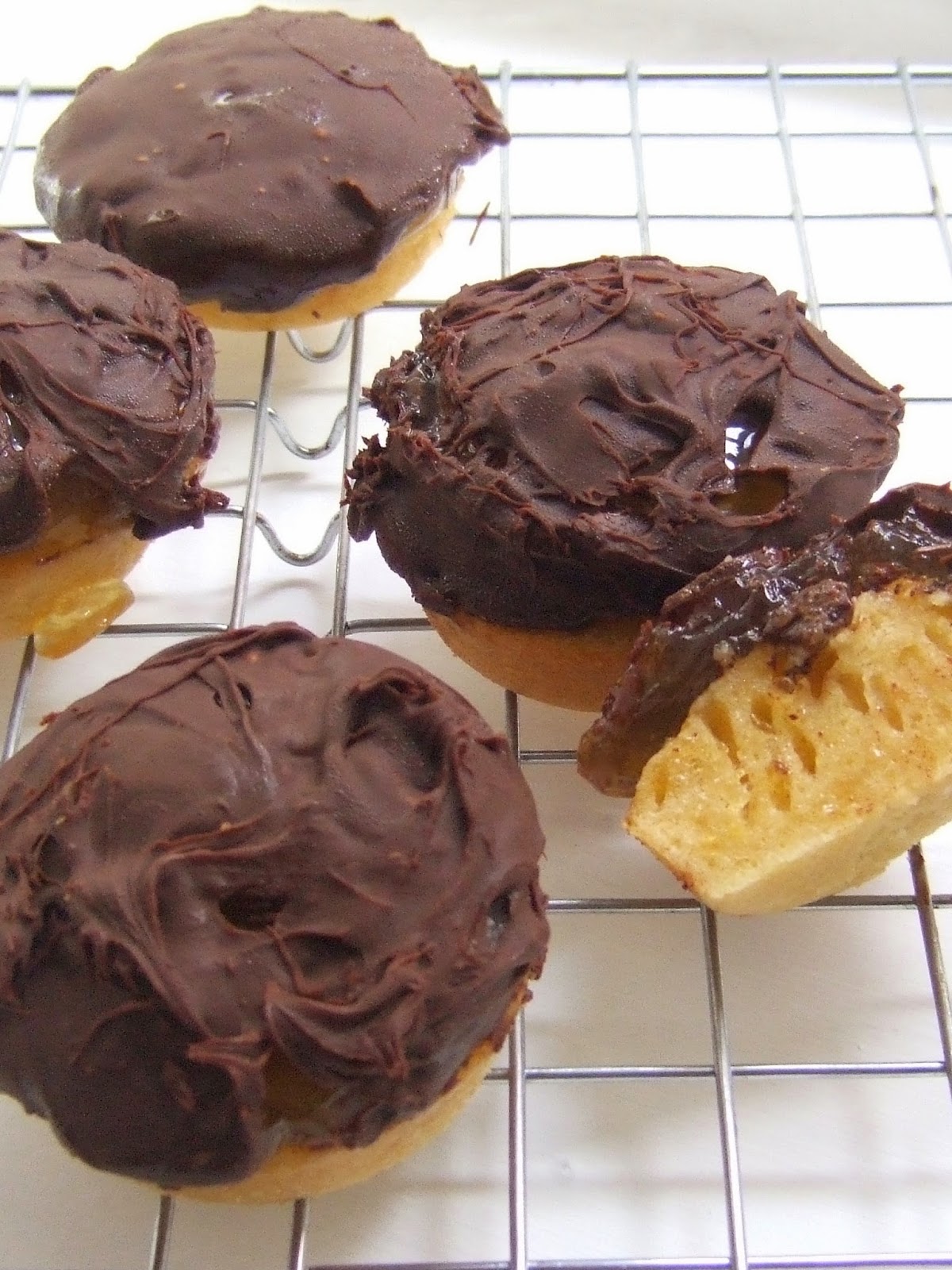 someone´s already taken a bite out of one

When someone says cooking something from scratch is as easy as buying it ready-made, it's usually just not true.One advantage however is that you can customise to your own taste,and sometimes it customises itself.
I love it when I can easily make something at home and it turns out to be just as good or better than the more expensive shop version.Home made foods can be infinitely superior if you have the time, and making it yourself can save you a lot of money.As you are aware I have been trying to recreate a lot of childhood favourites.Just before Christmas I cured my own ox tongue as opposed to going out and buying buying it industrially sliced in a hermetically sealed plastic pack.I rekindled memories of shopping with my nanna and buying bounty bars.When making Brownies I always have a jar of home made chocolate syrup in the fridge and also my own customised salt caramel.These are both expensive items if purchased in the supermarket.Since living in Portugal I have always made all our jams and preserves that grace our guests´ breakfast and dinner table.Rum and raisin ice cream was an all time favourite and I made my own customised version with a little help from the Clarke´s of Moro.So you see with a little time,patience and ingenuity you can create some of your own favourite comestibles and I do hope we might see this as a trend in the year ahead.
Imagine my excitement when I found a recipe for Jaffa cakes on pinterest.Well it gave me one dilemma and that was that we dont have Jaffa or Shamouti ( as they are sometimes called) oranges in Portugal.I could not call them Jaffa cakes so they would have to be Seville Orange cakes.Being me I refused to use shop bought jelly, and therefore decided in its place to make my own Seville Orange jelly.Having never made these before I stayed true to the recipe (with the exception of not being able to resist making a home made jelly),but along the production line I encountered a lot of hiccups.Whether my muffin tray has bigger wells than the author´s I don´t know, but my first attempt at making the sponge bases was unsuccessful to say the least.Having followed the recipe I was hard pushed to make my batter stretch to twelve portions and ended up with slithers of sponge bases.Not to be deterred I increased the proportion by half again and this time got succesful sponge bases but only eight.I suggest if you are embarking on this challenging project that you are braver than me in the final stage of the recipe.I had conniptions about pouring melted hot chocolate over the jelly I was so proud of having created.I thought it would melt the jelly so I let the chocolate cool slightly and as you can see from the picture I had some difficulty in getting a smooth presentation in my topping .In hindsight here the logic is that if the chocolate is hot it will seal in the jelly, avoiding jelly seepage which my little lovelies experienced.
Just before we crack on with the recipe,a whimsical aside. I read recently that it is highly debated whether the orange-flavoured snack is a cake or a biscuit, but in a court case Scottish company McVities argued that the distinction between cakes and biscuits is, among other things, that biscuits would normally be expected to go soft when stale, whereas cakes would normally be expected to go hard. It was proved that Jaffa Cakes become hard when stale.I dont think mine will be around long enough to become stale.See what you think? Here is my take( at half the price) on yet another of my childhood tea-time treats.Even if you mess them up,they are well worth the effort and I implore you to try them.You´ll only regret it if you don´t. 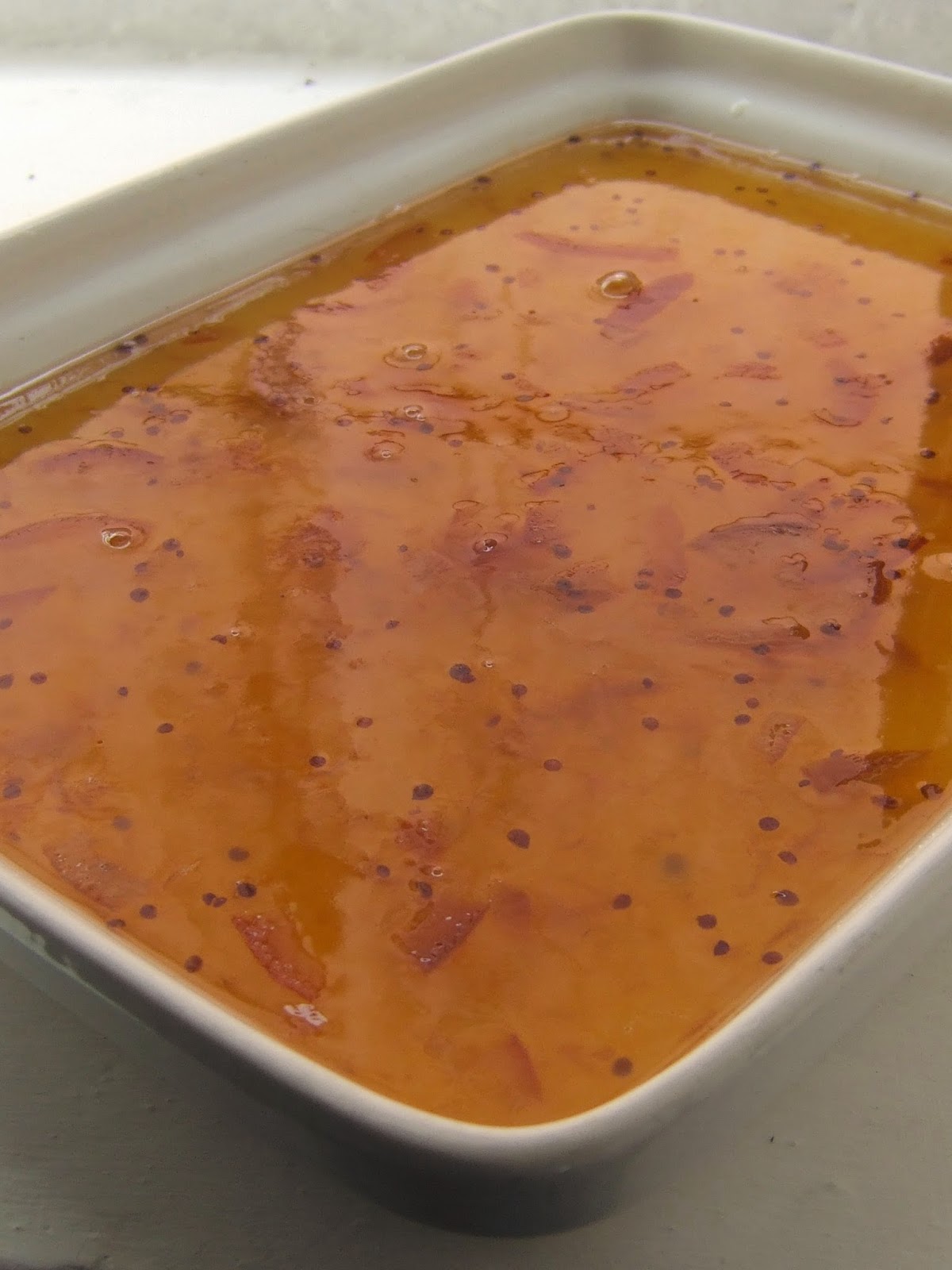 FOR THE JELLY
2.5kg Seville oranges juiced and passed through a fine sieve
(This should give you 750ml juice)
500g jam setting sugar with added pectin
4 tbsp Lemon juice
1 tablespoon of Seville orange marmalade
Pour the orange juice into a medium sized pan.Add the sugar. Bring to the boil,stirring constantly and boil for a maximum of 15 minutes less if the juice starts to show signs of setting.It will look fairly liquid in the pan but it will start to set as it cools.Allow it to cool completely.You should now have a litre of Orange pectin.When it is cool measure out 500ml of liquid and stir in the marmalade Soak 5 leaves of gelatin in cold water for five minutes to soften.Squeeze out as much water as you can and then in a small pan with 100ml of warm water stir in the gelatine stirring until it has completely dissolved.Pour this into the orange pectin and then Pour this mixture into a shallow-sided baking tray or large dish to form a 1cm/½in layer of jelly. Set aside until completely cooled, then chill in the fridge until set.