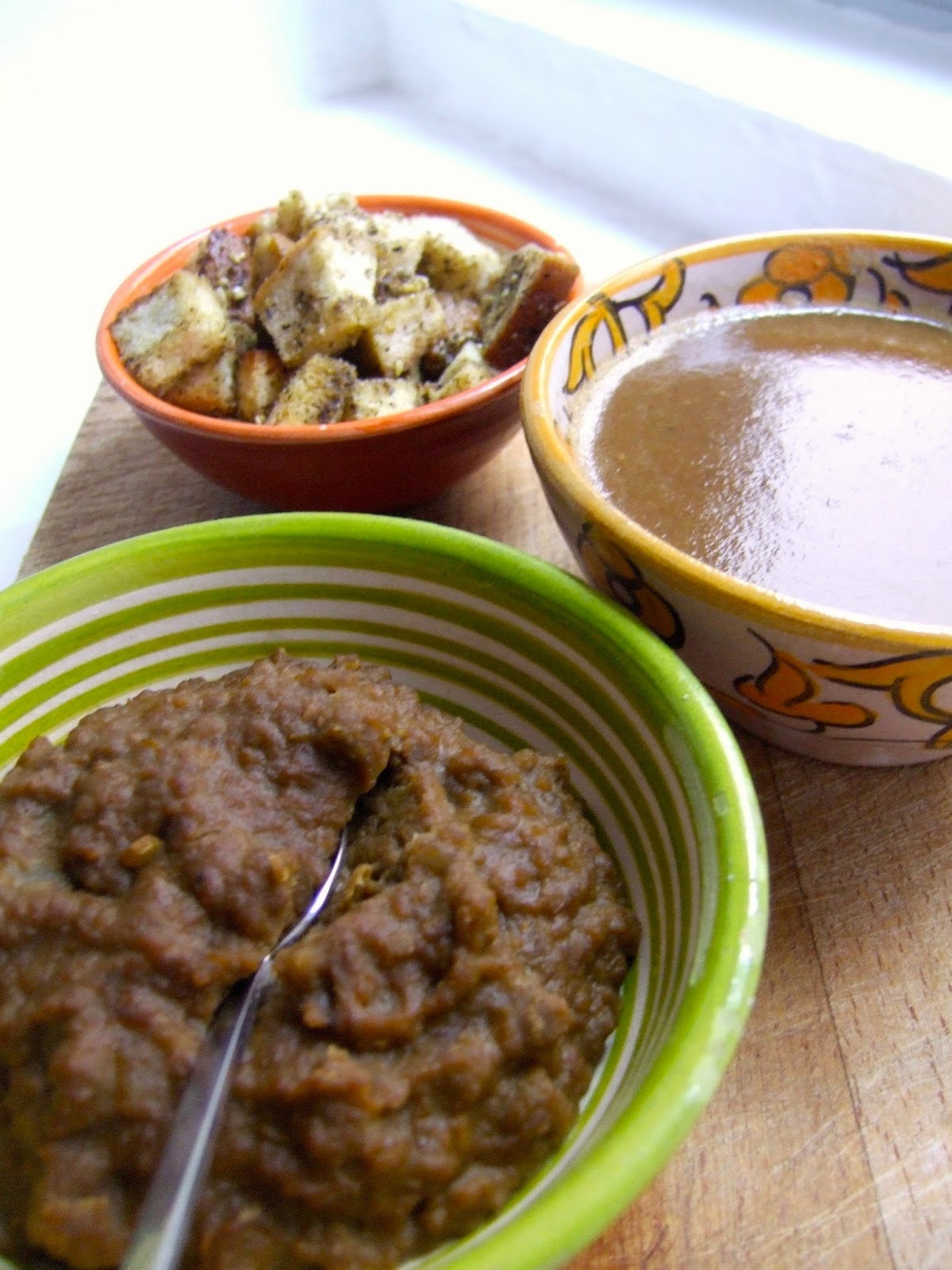 “Oh, the weather outside is frightful…” but this soup is so delightful!

New year,new you they say,and I have been working on a make over of our cookery workshop,here at Casa Rosada.(More on that story later).Meanwhile the Algarvian weather has not been clement of late.With high winds rattling our shutters and cold temperatures biting our toes some hearty winter soups have been much appreciated.
Split pea soup is a comfort food for many of us, and it is one of my favourites.What I am about to introduce you to is certainly not your typical split pea soup.This particular version is given a North African twist with the addition of paprika, cumin, and chili pepper.In Morocco, it’s called Bissara or Bessara and once cooked it is garnished with lots of olive oil and warm spices, then dunked with bread. It is particularly popular for being a warming dish in the mountain regions during the cold seasons because of the energy it provides for the body, and also in the country side for being cost effective.
This is a multi -tasking soup. It can be served in different guises throughout the year by diversifying the main ingredient - the pulse.You set the pulse to suit the season. In winter when we are awaiting the new season´s broad beans we can use dried broad beans or split green peas.Then in spring, when the fresh broad beans are popping their pods, you can make a gorgeous bright green concoction, cut through with the same spices and the addition of some creme fraiche.
Traditionally Bissara is best known as poor man´s food.There is a popular Moroccan saying "its only the poor that eat bissara" Personally, I like it just because! I mean what’s not to like about it? It does not cost much, easy to make, very healthy, and darn delicious and it reminds me of the “split pea soup” my mother used to make.

A bowl of Bissara, a hearty bean soup loaded with enough garlic to keep evens Satan away, mopped up with bread, is also popular street food. Hole-in-the-wall hatches dish it up for lunch with a scatter of lemon-infused olive oil and a sprinkle of cumin and chilli. Once sold out, the stall-holder will close his shop and call it a day, leaving the hungry ones hysterically heartbroken. Sigh.
Now about its versatility.The word bissara refers not only to this Moroccan Split Pea Soup, but also to a tasty Moroccan Fava Bean Dip. Leave the consistency thick for a dip or thin it for a soup. In this version of Bissara, split peas are simmered in meat broth with onions, garlic, paprika and cumin before being pureed with the addition of cayenne pepper to give it a kick.(use vegetable broth for a vegetarian version). The dish can also be prepared with dried chick peas, but you'll need to allow time to soak them overnight. The split peas don't need to be soaked.Garnish the Bissara the traditional way with cumin and olive oil; or if you've made it extra spicy, consider adding a bit of fresh coriander and a swirl of creme fraiche or plain yogurt.
For a change, you can reduce the olive oil in the recipe and garnish the Bissara with a drizzle of argan oil for a light, nutty flavour that complements the split pea's natural flavour.

I adapted this recipe "somewhat", using a ham hock ,and upping the ante of spices, I also made za’atar croutons to give the soup a little bit on the side. The result was fantastic — a richly spiced, velvety broth with just a touch of spicy heat. Crispy croutons that were so good I had difficulty not eating them all straight out of the pan.

FOR THE SOUP
1 lb. (500 g) dried split peas or dried fava beans
6 cups (1.5 liters) beef, chicken or vegetable broth
2 cups (500 ml) water
1/3 cup (80 ml) olive oil
1 large onion, chopped
6 cloves garlic, chopped
1/4 cup fresh parsley or cilantro, chopped
1 tablespoon paprika
2 teaspoons cumin
1/2 teaspoon salt, or to taste
1/4 teaspoon black pepper, or to taste
1 teaspoon cayenne pepper, or to taste
cumin and olive oil, for garnish (optional)
In a large pot, cook the onions and garlic in the olive oil over medium-low heat for just a few minutes, or until fragrant and softened. Add the remaining ingredients and bring to a boil over high heat.
Reduce the heat and simmer, partially covered, for 50 to 60 minutes, until the peas are tender. Stir occasionally while cooking. If you'd like a thicker consistency bissara to offer as a dip, remove the cover for the last 15 minutes to reduce the liquids a bit more.
Puree the soup in batches in a blender, adjust seasoning, and serve. Garnish as desired.

FOR THE CROUTONS
125 g (4 oz) day old bread
2 Tbs za’atar
1 tsp flor de sal
1 Tbs olive oil
Preheat the oven to 200C. Cut the bread into small cubes (approx. 1/2-inch square). Toss the bread cubes with the oil and the spice mixture. Put the cubes in a single layer on a baking tray and bake for 20 minutes or until crisp and golden.