Does an apricot belong in a jar ? 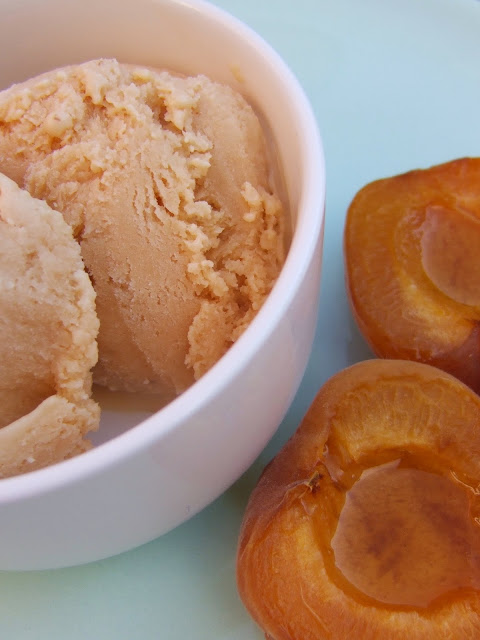 Bittter sweet "apricot almond" ice cream
Just when I was bemoaning the fact that the apricots  had not made an appearance this year, a dear friend and neighbour dropped by with two crates of apricots.They were divided into two categories, the finest quality fresh and ripe and ready for eating and second grade a slightly blemished batch ready for the preserving pan.My action plan yielded  a large batch( 6 kg) of compota,and an exceptionally delicious apricot chicken curry. 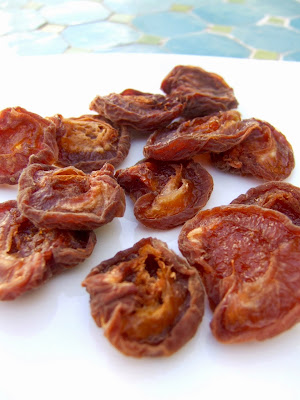 I am still in the process of sun drying the remainder on the dashboard of the car to store for my winter reserve. I have now learnt something about apricots I never knew, namely that the pits hold a precious secret.The secret is what is inside the pit, the apricot kernel which is heralded by some as a miracle cancer cure, despite a lack of clinical evidence for its efficacy.
The apricot kernel (Prunus armeniaca),is the soft part inside the seeds of the apricot. It is said to be a good source of iron, potassium and phosphorus, and one of the best sources of vitamin B17 (also known as amygdalin).
The pits of apricots, nectarines, peaches and plums all contain a kernel that tastes astonishingly like an almond. Not a sweet almond, but one with a rounded nutty flavor that ends bitter. And they can be used in ways other nuts cannot.They are, not surprisingly, called "apricot almonds" or "bitter almonds."
In fact I also just learned while writing this post that apricot kernels are sometimes used to make amaretto and creme de noyaux, a liqueur that takes its name from the French word for fruit stones.Apricot kernels very often replace almonds in the production of amaretti cookies.
Putting two and two together I realised that these bitter sweet kernels with their unusual potency would make an interesting  ice cream.Cold tends to temper flavours.I also recalled how just one single kernel gave a jar of apricot jam a perceptible scent.
Therefore infusing cream, milk and eggs with kernels would bring out the flavour even more.The fruit pits contain small traces of cyanide, but using the kernels as an aromatic poses a negligible risk .Anyhow, it would take a lot of kernels to harm an adult and I think apricot pit ice cream would not be a flavour children would appreciate,and should be served in small amounts with some kind of fruit or other flavours on the side to give it its full umami. 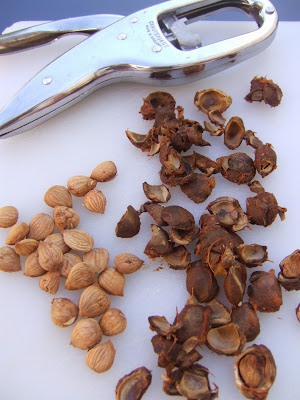 I got cracking on the stones with my trusted heavy duty nutcracker to retrieve the seeds.A daunting task, but in hindsight worth cracking over fifty pits to discover the reward at the end. Smashing with a hammer is all very well and great fun, but one soon finds crushing is more efficient and less messy. I then toasted the broken shells lightly in the oven which dried out any of the fruit flesh still attached to the stones.As I was intending to use the crushed stones as well as the kernels in my infusion this would intensify the flavour.I would then sieve out all the fragments before churning the ice cream.

This the perfect dessert for a mischievous cook like myself.You can keep your guests guessing the flavour. "It looks like vanilla ice cream", "it´s the colour of butter, with the flavour of almonds but not regular almonds". "Almonds that could have come from a an unusual variety of tree". You can keep them guessing forever.
45 to 50 apricot pits (4 1/2 ounces)including broken shells
2 cups milk
1 1/2 cups heavy cream
1/4 cup plus 3 tablespoons sugar
7 egg yolks.

1. If you have not got a heavy duty ratchet nut cracker (see above)wrap apricot pits in a heavy tea towel or strong freezer bag. On the floor or on a firm cutting board, crack pits open using a hammer or a meat mallet, exposing kernels.This method is not entirely reliable. As you smash the pits you also smash many of the kernels whereas the nut cracker keeps the kernels whole.
2. In a medium saucepan, combine apricot kernels and  broken shells with the milk and heavy cream. Bring to a boil; turn off the heat, and let cool. Chill overnight in refrigerator.
3. The next day, bring the milk mixture to a boil again and strain through a fine sieve. Meanwhile, in a large bowl, whisk together the sugar and the yolks until light and fluffy. Whisk about 1/2 cup hot milk into the egg mixture, and then whisk the egg mixture back into the milk. Pour into a large saucepan, place over medium-low heat and, stirring constantly with a wooden spoon, cook until thick enough to coat the back of the spoon. Remove from heat immediately. Let cool, and then strain.
4. Pour into an ice cream maker, and follow manufacturer's instructions.
Yield: 1 Litre / 2 pints.
If you are buying the apricots in small amounts,you can save the pits in the refrigerator or freezer until you have collected enough.