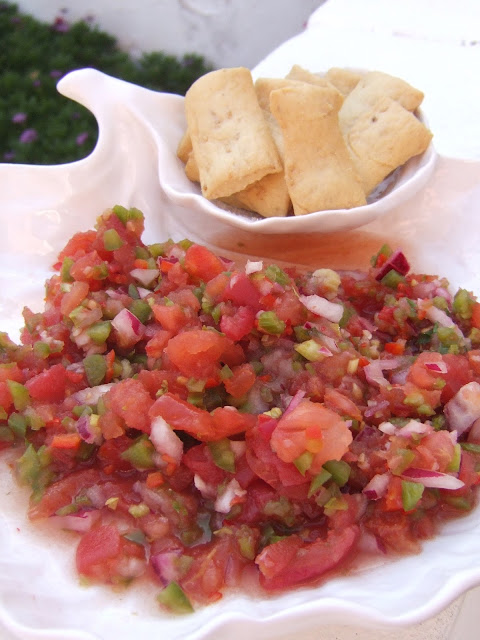 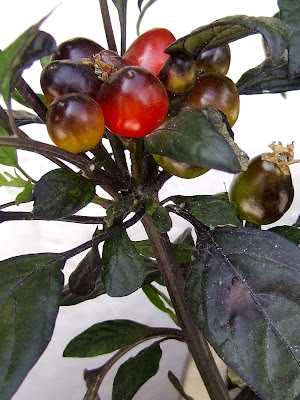 Chilli peppers originated in the Americas. After the Columbian Exchange, many cultivars of chilli pepper spread across the world,being used in both food and medicine. Chillies were brought to Asia by Portuguese navigators during the 16th century. Upon their introduction into Europe, chillies were grown as botanical curiosities in the gardens of Spanish and Portuguese monasteries. But the monks experimented with their culinary potential and discovered that their pungency offered a substitute for black peppercorns, which at the time were so costly that they were used as legal currency in some countries. There are peppers that can awake people from the dead and there are peppers that are a deadly threat to life, but one in particular, the black pearl chilli,which originated in Mexico has such an enchanting beauty its binding spell made us purchase it and take it home thinking it was just another ornamental bush for the garden.Things are seldom what they seem.  The plant has an eery beauty.Its mesmerising shiny pearls make one imagine it having been created by the White witch- queen of Narnia to attract children, before getting their greedy tongues set on fire.The Lion, The Witch and The Wardrobe was always one of my favourite childhood stories. Surprisingly for once ,if you went back into the closet you came out queer.Now there´s a thought.
Part of what makes the Witch so creepily evil is that she's not what she seems. In the real world, we're used to appearances being deceptive. But in Narnia, the way things look is the way they really are, and the outside usually expresses the true nature of things.
On research not only did we discover that its fruit was edible but also that the fruits of ‘Black Pearl’ are  intensely flavoured, producing enough “heat” to register at about 300,000 on the Scoville heat units scale,( a measurement of the amount of capsaicin present in plant tissues). (Capsaicin is the ingredient in pepper spray used as an irritant weapon; it’s also effective at keeping African elephants from foraging on crops).That makes it tantamount to the Scotch bonnet, habanero and Guyana wiri wiri chilis.The plant is native to much of South America and Mexico, but in Europe performs wonderfully in a container all summer...This pepper is very enticing to children and some adults, who can find that the oil is detrimental to their eyes.It´s capsaicin is one of the worst on your skin and burns horribly.As a result, should you elect to grow this beautiful plant, do not allow children,or pets to touch the fruit.The beauty of the plant can be dangerous to those not informed.for those who know however and enjoy incendiary cuisine,this is the one for you.but first a bit of incendiary advice...

Well,thats enough of fairy tales and enchantment. The immature berry-size fruits are quite firm, but as they ripen and turn red, they’ll also soften and present a hazard. Even the juices from a soft fruit will burn skin; and if one should fall and be attractive to pets, you can expect quite a reaction. If you can remember not to squeeze the ripe fruits, and keep curious animals away, you should be happy with ‘Black Pearl’. Make sure you wash your hands well after preparing, slicing and chopping the Black Pearl chilli.Do not rub your eyes...What’s more, you won’t be bothered by elephants.
The Black Pearl  and other chillies are also astonishingly good for you. Black Pearl Peppers stimulate the metabolism. They fight cancer. They help diabetics. They are vitamin-rich and contain immune-boosting antioxidants.Ironically I have not been able to find a recipe using them, so since it originates from Mexico I thought I would  test its degree of agression by making a fiery Mexican salsa, followed by a Black Pearl punchy panzanella.So if you are looking for a meal with a kick,something slow burning and with a robust flavour here´s your red hot sultry date for the evening, along with a tribute to Britain´s much loved Cilla Black who died last week.

"What’s your name and where d’ya come from?"
I´m black pearl and I´m from down mexico way
"And here’s our Graham with a quick reminder about the recipes."

Stir all together to taste in a large bowl and set aside to rest in the refrigerator.

Black pearl punchy panzanella
serves 4-6
When I made the salsa it was heavy on moisture content and therefore great for a panzanella.There is always debate about whether the day old bread should be moistened with water or vinegar.I´m with the latter and strained the vinegar from my salsa over the torn bread which constituted my salad.This gave it an invigorating zip of vinegar, which makes all the others seem bland. There's no competition here: vinegar it is.Although a good panzanella should retain some texture, you don't want the bread to remain dry and chewy. 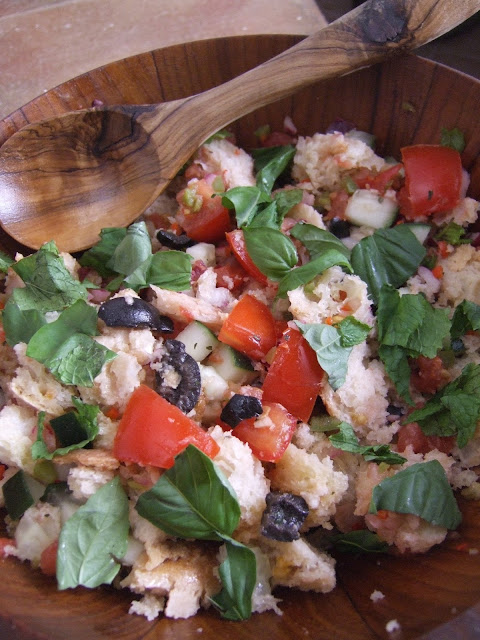 Tear the bread into chunky pieces and put in a salad bowl.Sprinkle with a tablespoon of strained vinegar from the salsa and 3 tablespoons of extra virgin olive oil.Set aside
while you make the rest of the salad.Bring all the ingredients together tossing the slsa vigorously  with the soaked bread in a salad bowl and adjust the moisture content adding more olive oil and salsa strained vinegar if necessary.
Email Post