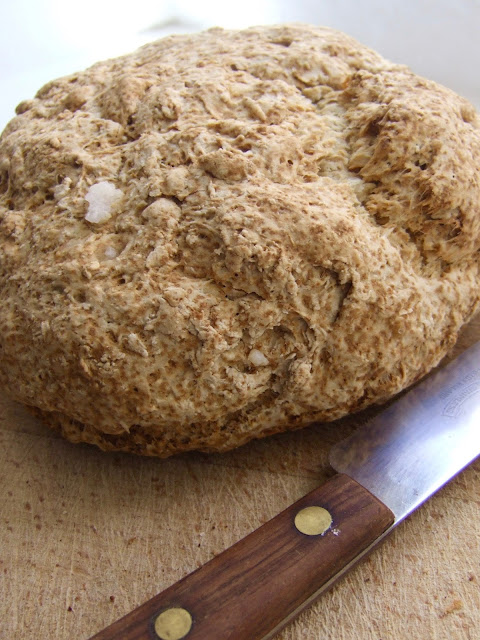 "Flour, Salt, Baking Soda, Buttermilk.
Anything else added makes it a "Tea Cake!"

The Portuguese and the Irish have more in common than you might think. They both inhabit lands on Europe’s western edge, have a long Catholic history, revel in tradition and have a penchant for getting themselves into terrible debt.
The Portuguese and the English famously claim the world’s oldest alliance. Despite a fracas or two along the way, this diplomatic accord has been in place for hundreds of years.
It turns out, however, that the Portuguese and the Irish have been rather more than just good friends for thousands of years.Following wars in Ireland during the 16th century, there was a wave of Irish migration to Europe and in particular to Portugal. Some of these migrants had highly successful and illustrious careers; others like some of the todays migrants weren't so fortunate.I love recipes that are passed on and this recipe for Irish soda bread was given to me by one of our guests who stayed last weekend.With Saint Patrick´s day upon us I thought it was the perfect chance to give it a try.The recipes provenance is from a cousin in Dublin and having been given the recipe ten years ago he has been making it ever since.This recipe uses traditional ingredients,flour, buttermilk, salt and of course baking soda.The Americans include eggs and butter,which the Irish don’t normally add to the dough,tending so sensibly to keep all the butter back for spreading liberally over the freshly baked bread! 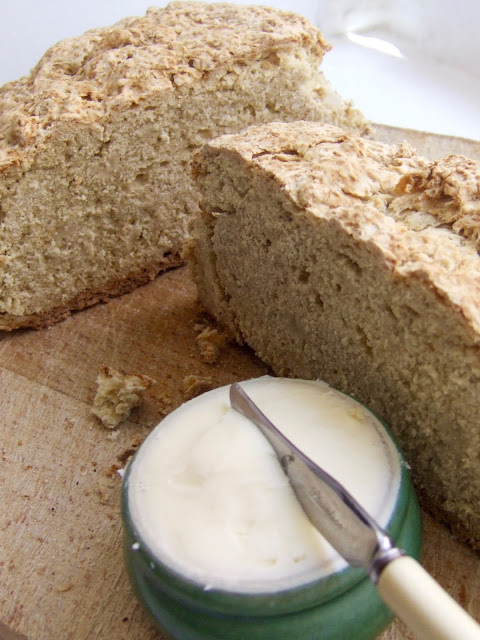 Irish Soda bread was borne of necessity, without the climate to produce strong, gluten-rich wheat, the flour in Ireland was soft and made for poor quality yeast-leavened bread. Soda bread works best with lower gluten flours so has been popular in Ireland since baking soda (which in Ireland is called bread soda) became available in the 18th century. It has the great advantage too, of requiring no kneading and being ready in a matter of minutes.
A crucial ingredient in soda bread is buttermilk. This was originally the liquid leftover when butter was churned from cream. The cream was easier to separate from the milk if it was left for a few days, which led to the characteristic slight sourness of buttermilk. These days the buttermilk that is commercially available is milk to which a little bacteria has been added. Not quite as authentic but it still works well in soda bread. I have been known to make my own buttermilk which is an extremely easy process but on this occasion I used a 50/50 blend of plain yogurt and water.
So always use the traditional ingredients/recipes when making "traditional Irish soda bread." Of course, make some fancy cakes and desserts for St. Patrick's Day, but save a spot on the table for Irish soda bread as a memory of how far the Irish have come from the days when it was the only thing on the table, to today when our tables are filled with good things to eat and thoughts of the famine years (An Gorta Mor) are long forgotten.

A traditional Irish soda bread
Ingredients for one loaf:

Notes
If butter milk is not available use a 50/50 blend of plain yogurt and water. An alternative to putting in a tin is to bake it free form in a circle like a large scone, which is the traditional Irish way, with a cross marked on the top.
The treacle gives it a lovely brown colour, which toasts really well, but it can be omitted.
Email Post