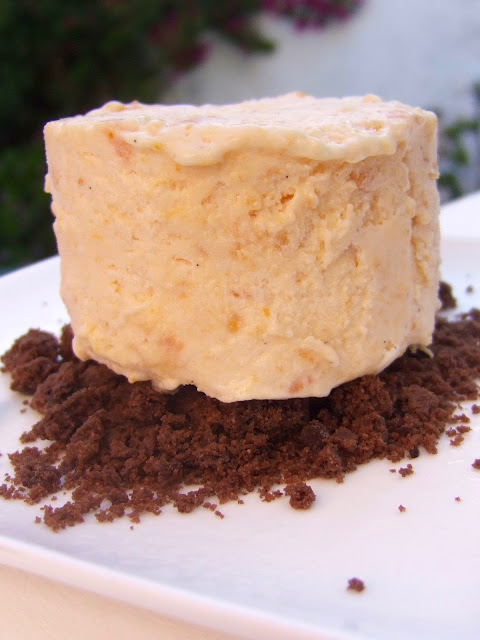 I have to say with the opening of La petite France in Tavira that I have become a bit francophiled. Along with this and the help of our annual bountiful gift of select organic apricots from our neighbour Eglantina at Companhia das Culturas I have unearthed a wonderful recipe for an apricot parfait.It really is "C'est parfait."The recipe I have always used in the past has been a Dan Leppard recipe for honey and almond parfait which I serve with poached or pan fried apricots on the side, and is made in a loose bottomed cake tin which I the adapted to a loaf pan version and then sliced. This parfait however makes apricots the star ingredient and I have to say is simpler to make. It can be made as individuals and kept in the freezer until you are ready to serve.
It can be made with any fruit and is similar to an ice cream.Perfect for  summer entertaining.
Just as a footnote........something that happened to me when I came to make this recipe
Well it's happened to the best of us: you pull out all the ingredients needed to bake your favourite recipe when all of a sudden you realize all you have in your store cupboard is plain old granulated sugar. But the recipe wants fine, powdered or maybe even brown sugar. So does that put paid to your baking?
Not at all. If the recipe calls for caster, confectioners, or brown sugar, you can actually make any of them at home from regular white sugar. If you don't have it in the house, you don't have to run out to the shops—you make it yourself,so I found out when it happened to me.If it happens to you, all you need is a coffee grinder or food processor and a bit of ingenuity:
Superfine or caster sugar
For one cup: Grind one cup and two teaspoons of white granulated sugar in a blender or food processor for 30 seconds. Also called caster sugar, this is simply sugar that has been ground into finer crystals than regular granulated. This makes for sugar that is lighter in weight and dissolves more quickly. It's often called for in recipes like meringue or angel food cake that are known for being light and airy.
Apricot parfait with chocolate soil
For the apricot base:
400g apricots (8)
150g caster sugar
1 vanilla pod or 2 teaspoons of vanilla extract
For the meringue base:
2 egg whites
225g caster sugar
100ml water
For the whipped cream:
300ml double cream
1 packet of crunchy chocolate brownie biscuits crushed

Preparation Time: 25 minutes (+ 12 hours chilling)
Cooking Time: 20 minutes
Serves: 7-10
Preheat the oven to 200°c.
Cut the apricots in half and remove the stone, cut the vanilla pod in half lengthways and scrape out the seeds, weigh out the sugar for the apricot base.Mix the vanilla seeds into the sugar, then tip the mixture into a roasting tin and place the apricot halves, cut side down, into the sugar. Put the roasting tin into the oven for 20 minutes.
Remove the apricots from the oven and allow them to cool in the roasting tin while you make the rest of the recipe.Put the water and the sugar for the meringue base into a saucepan over a medium-high heat and stir it to dissolve the sugar.
Once the sugar has completely dissolved, stop stirring, turn up the heat and leave it to boil for 5 minutes. Meanwhile, put the egg whites into a large bowl and whisk them until they have reached the soft-peak stage, i.e. the marks left by the whisk in the egg whites are soft and rounded (if you don’t think you are able to whisk the egg whites in 5 minutes, either do it before boiling the sugar or buy an electric whisk).
When the sugar has boiled for 5 minutes, quickly take it off the heat, start whisking the egg whites again and slowly pour in the sugar syrup into the egg whites in a thin, steady stream.
Continue to whisk the egg whites for about 5 minutes before putting them to one side.
Transfer the apricots from the roasting tin to a bowl, setting aside a few tablespoons of the syrup for later. Using a potato masher, mash the apricots until they have formed a coarse pulp. Put them to one side.  Put the double cream into a large bowl and whisk it until it has reached the stage between soft peak and stiff peak. Then put that to one side. Pour the apricot mixture into the egg white mixture and stir them together. Tip the double cream into the egg white and apricot mix and stir it all together. Pour the mixture into moulds and put them into the freezer for at least 12 hours until they have set solid.
Remove the parfaits from the moulds and serve. I served them with some crushed chocolate brownie cookies and some syrup I had set aside.
Email Post