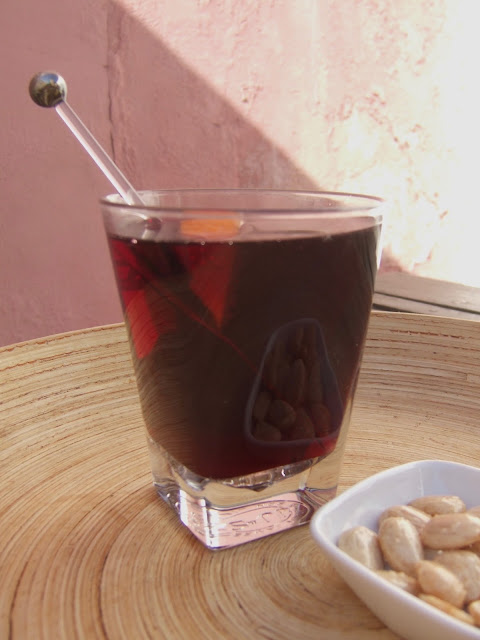 “red wine of summer”   Cheers!
As a child growing up I remember my first taste of wine: heavily diluted with water and from memory, served in a sturdy tumbler. I felt proud to be sophisticated enough to drink the same thing as the grown-ups.Little did I know this was the beginning of the end of the slippery slope to a lifetime of enjoying wine a little too much.
In the last twenty years or so, wine spritzers have fizzled out. They went from cool and refreshing to sliding completely off the bar menu. What started the spritzer’s fall from happy hour one will never know, but the bubbles burst and I think its time to make the hour happy again.
Wine spritzers are light, but still take the edge off. They bubble, without the need for pricey Champagne. They can be made with red or white — and gussied up by adding berries fruit, herbs and spices.
A spritzer is a long drink made by adding soda water to white wine.The concept has been around for for over a century( hock and seltzer was a popular nineteenth century drink),but the term spritzer is a modern derivative. It seems to have been coined in American English in the 1950´s, as an adaptation of the German word Spritzer,meaning  ´splash` and influenced also by the German adjective spritzig,fizzy,sparkling.
The word "spritz" on its own is a generic term linked to the 19th century Austro-Hungarian practice of adding a splash ( spritz) of water to northern Italian wines. Rumour has it the strong wines made in their Italian territories were too bold for the refined Habsburg palate, so a dash of water was used to mellow out the wine.The Spanish developed sangria mainly for the tourists, but kept an alternative on the cocktail bar for their own libation.Known as tinto de verano, literally “red wine of summer” it´s essentially a wine spritzer of sorts, made from equal parts red wine and gaseosa,orlightly sweetened lemon-lime soda similar to Sprite or 7-Up,but to my palate more interesting.Tinto de verano is far less boozy and because it does not contain such expensive ingredients (triple sec etc)cheaper than its touristic counterpart and more commonly known bevy.Not always featuring on cocktail menus, you may have to ask for it. Standing out in the crowd is a good thing.
Over the past few years,riding on the back of the gin revival and new wave of cocktail bars,  these fizzy, summery drinks have reclaimed their rightful place at the table as cocktail enthusiasts have explored the varied (and storied) traditions of the European spritzer.Now there’s a whole world of spritzy cocktails out there that pair wine with carbonation,first up..........
Tinto de verano
1/2 cup red wine, any red wine, preferably Spanish

1/2 cup gaseosa, or lightly sweetened carbonated lemon-lime soda, such as Sprite or 7-Up
Slice lemon
Ice
1. Toss a few ice cubes into a tall glass. Pour in the red wine and then add the soda. Toss in the lemon slice. Sip immediately.

I came to all this by default when my body suddenly decided this late in life to reject white wine.Suddenly white wine sent my stomach into shock waves. My drinking habits were now confined to the parameter of red wine and Rosé.I have always enjoyed a good red wine,though not my first choice, but mainly in the winter when it is comforting rather than refreshing.In the last few weeks when the fierce heat of summer arrived I have found drinking red wine at room temperature not to my liking.What could I do? I decided to put a new spin on this century old practice to create a refreshing thirst-quenching summery red wine spritzer.I wanted to find a solution that would be a substitute for sugary drinks like lemonade and soda, so sparkling water was a must.
In order to keep flavour and not dilute too much, I married the concept of the whiskey sour, which has also been around since the 19th century, with the more modern tinto verano and reclaimed from its nostalgic purgatory the sour element of the old English gimlet. I whisked the whisky out of the equation and found a recipe for a home made sour mix.The recipe has an easy to remember formula for good measure(  excuse the pun)1/2 and 1/2 sour mix and red wine to 2 parts sparkling water.

Fill a Tom Collins glass or other tall glass (like a highball ) with a handful of ice cubes. Gently stir 1/2 cup sour mix and 1/3-1/2 cup sparkling water into each glass. Top each with 1/2 cup red wine; if you pour gently, the wine will float on top of the sparkling water, slowly bleeding into the cocktail as the ice melts. You can choose to mix the wine into the rest of the cocktail or let it slowly meld together on its own. Enjoy then mix yourself another

Stir the sugar and water together in a small saucepan over medium heat. Bring to a simmer, stirring occasionally until the sugar has completely dissolved and the syrup is clear.Pour into a heat-safe jar, like a Mason jar, and cool to room temperature.
Stir in the lemon and lime juices.
Sour mix will keep for up to 2 weeks in the refrigerator.
Email Post