A tale of the the Spanish inner sole, an Italian slipper and a Beef Wellington 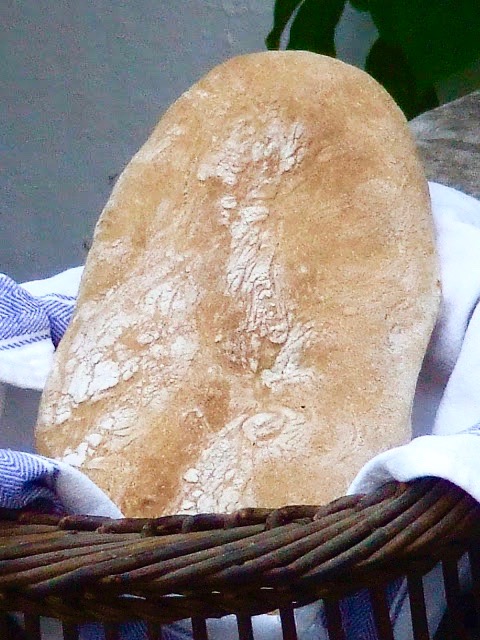 What is it with shoes and artesan bread?-Food and feet, if its the shoe that fits the foot I will buy it and wear it. I have to confess that while I won't cram my feet into shoes which are too small, if I really want a pair that are a shade too big, I'll happily pad them out with insoles.When purchasing an inner sole recently I noticed that there seems to be a certain similarity between slippers inner soles and some types of bread.Take for example Ciabatta. It was hailed in the nineties as the saviour of the Italian bread industry, and rocked the sandwich world globally.It soon became the Mother's Pride of the chattering British  classes and by the time Nessun Dorma rang out from Italia '90, it was one of the most popular of the new range of `exotic mediterranean breads´.
Just take one look at it.For a start it´s a ridiculous shape.It's pointless slicing it as you would, say, a pan loaf for a sandwich - a pair of the resulting bread slivers would offer little shelter for your bacon or cheddar, and most fillings would slop wildly out of the sides.Yet slicing horizontally can be a risky business too, requiring advanced knife-skills to retain one's upper fingers. And then there's the name. If that's the shape of a slipper, then how did  beef wellington acquire its name when it is something I put on my feet when it's muddy outside.
The inventor of ciabatta Francesco Favaron, a baker from Verona, apparently looked at it and thought, 'What can I call it?' Then  thought that it was similar to his wife Andreina´s ciabatta( slipper ), so he called it 'ciabatta'.
There is so much you can do with ciabatta sandwich wise and supper-wise, and its great for rustling up a smart picnic item - Pan bagna.While on the lines of pressed sandwiches why not use your ciabatta to make a pressed panini for a quick and easy weekday supper. 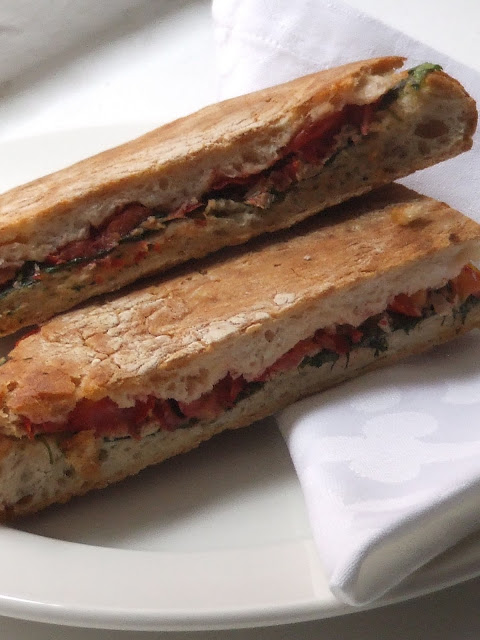 Supper in a slipper -My Cubano Tuna Melt
400g (14oz can tuna, drained


Put the tuna, lemon zest, and onion in a bowl with the mayonnaise and mix until just combined adding more mayo if it needs it. Slice the ciabatta in half  horizontally and make a bed of half the spinach leaves on it. Spread the mayonnaise mixture over the leaves followed by a layer of sliced tomatoes.Top with the rest of the spinach leaves and sprinkle the grated cheddar to cover. Put the tops back on the flat bread.  Heat a cast iron pan on medium low for about 3-5 minutes while you assemble the sandwich.
Put enough olive oil (you can use butter or veg. oil) in the pan, let it heat for a minute and gently place the sandwich in the  pan. Weigh down with whatever works for you. I use another cast iron pan and a set of weights, a handy tea kettle filled with water would do the same job.Cook low and slow, checking after about 3 minutes. Flip and repeat.
Eat and enjoy.

Another example is the artesan  Spanish crackers that look like inner soles.Spanish cuisine offers a wide variety of artisan bread and crackers, from Galician bread with its crisp crust and light, airy interior to classic 'picos' and pipas, to crunchy tortas de aceite and crackers coming in every shape, size and form.
In bars and cafes across Spain you will almost always find  'picos' , great with a bowl of olives and a glass of wine. These classic snacks are also a great crunchy accompaniment to soups, salads or tapenades. 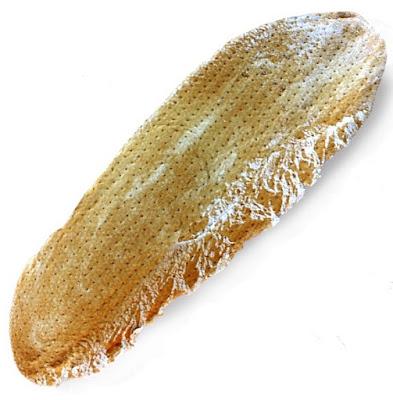 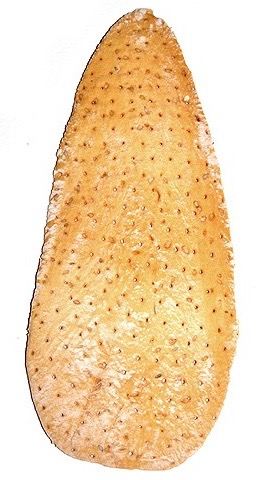 Did you know that the first insoles were actually made by innkeepers, not shoemakers? Weary travelers often complained about tired, aching feet, so innkeepers developed insoles for travelers to put in their shoes to alleviate pain. The insoles were like matted pads that were made out of animal hair; nothing like the ones we use today,but looking very similar to the crackers that I spread my dips, jamon, muxama and soft cheeses on.
Anyone found any little shoe shaped breads ? -I´d love to hear from you. 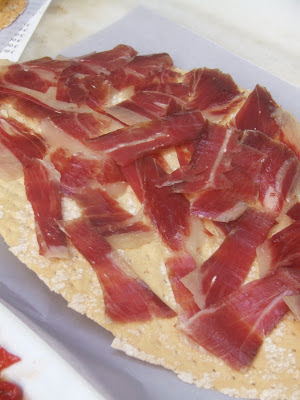 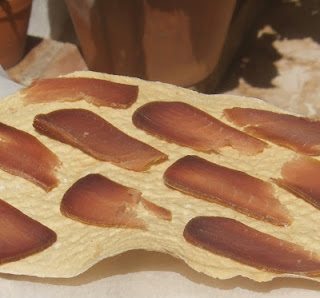