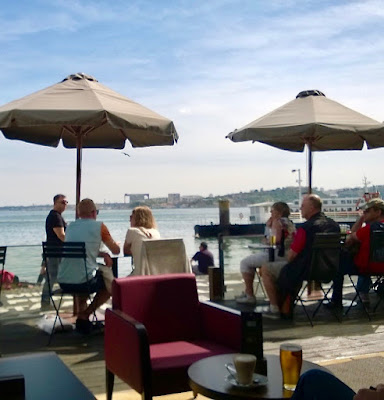 An island, a salt warehouse, a restaurant,a cafe....
I reiterate from my previous post how important it is for me to have  a convivial environment to eat in.When ones feet are sore and your calf muscles ache from climbing up and down the seite collinas de Lisboa its time for a bit of relaxez-vous, a bebida, cerveza and perhaps a petisco or something more substantial.Our friends recommended this place having in turn been recommended it themselves by another friend.No regrets here.Cafe Ibo and its adjoining restaurant are located just a stones throw from the “Praça de Comércio” Slap bang on the water, you can eat and watch the world go by accompanied by very tasty food and good wines at a very acceptable price point given the quality and location.Just where ferries embark and disembark from the cais de sodre ferry terminal you can both people watch and admire the views. It serves a variety of light snacks, great salads and sandwiches,  and a full range of drinks (including selection of craft beers).What makes for a good ambience is the friendly staff and the prices will not put a hole in your pocket.It became evident quite quickly that this is a local cafe for local people.this was reiterated by one tripadvisor review I read afterwards.

An added bonus to this venue is the origin of its name and a reminder of its history.The establishment is named after Ibo, an Island in the Quirimbas Archipelago ( Indian Ocean ) off the north coast of Mozambique.
In the 17th century Ibo Island was the capital of a large area on the east coast
of Africa. At that time, this area was dominated by the Portuguese, from the centre of their Oriental colonial empire, Goa.Its strategic location allowed the Portuguese to control the Arab trading that existed then in the region.Other Europeans, such as the Dutch and the French, made several attempts to conquer the island. Consequently, in the late 18th century (1791) the Saint John Baptist Fortress was built.This military and commercial evolution attracted people from different parts of the world. Evidence of this can be seen, still today, by its mixed population.Today the Ibo Restaurant and cafe
are housed in a simple refurbishment of a former salt warehouse, built at the beginning of the 20th century. So as one revives oneself from steppin out in Lisbon, imbibing some fine artesanal beers and sampling some inspired Portuguese gastronomy and Mozambician flavours one casts ones mind back to the travels of the Portuguese and evoke passions of its colonial past. 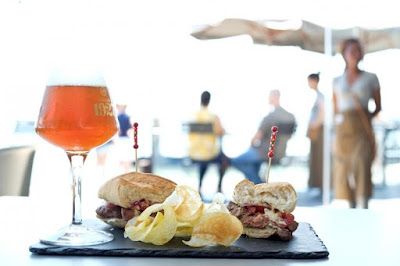 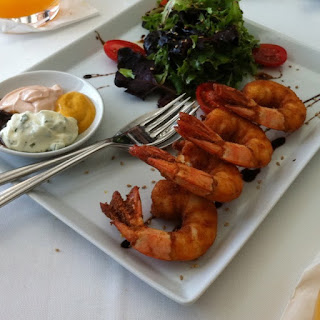 Mozambique prawns at Ibo whats not to like
foodspotting 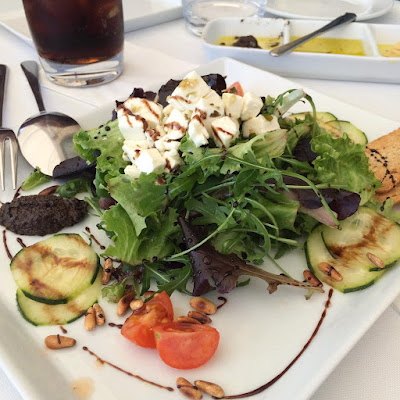