Garnalenkroketten - the most delicious croquettes that one could ever dream of 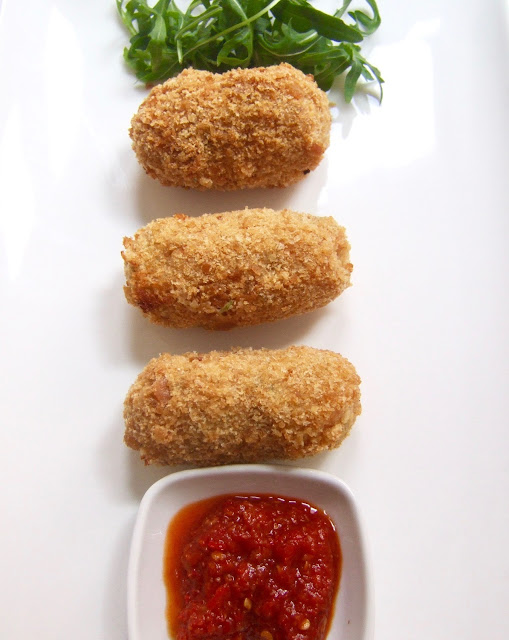 Not far different in taste from the Portuguese Rissois de camarao
However you care to spell it croquette,croqueta, croquetes, kroketten and whether you replace the "c" and "q" with the "k" ,the croquette (from the French croquer, "to crunch") gained worldwide popularity, both as a delicacy and as a fast food. It started life humbly as a great way to use up leftovers. Sunday roast ended up in the mincer and was then folded into a creamy thick gravy,after which it was refrigerated rolled into logs,breaded and deep fried to produce beautiful golden crispy cylinders.These type of croquette are the more traditional Dutch kroketten crammed with beef or veal ragout – however Garnalenkroketten (prawn croquettes) are something else. My passion for croquettes started at a very early age when my mother used to make the Eastern European variant, the Kromeski, minced poultry, game, or meat, bound to a stiff paste with sauce, wrapped in bacon, coated in batter, and fried.There was no turning back and I used to ask my mother incessantly to make them for me.
Being fried, starchy and assertively salty they're pretty damn perfect in tapas terms. Its hardly surprising therefore that the Spanish adopted them.Made with a stiff béchamel rather than mashed potato, they need to be eaten hot – so hot you burn your fingers on the crisp breadcrumb exterior as you rush to bite into the molten centre.They are not easy to make, so the bar or restaurant that achieves the perfect croqueta will have a loyal following.It is the same in Holland where Patisserie Holtkamp in Amsterdam is one of the more sophisticated croquette producers and has embraced a more varied range of fillings than its competitors.It is most famous for its best selling  Garnalenkroketten (prawn croquettes)When I discovered this recipe from Ottolenghi´s column in the Guardian I had to make them immediately.Oh how I love a croquette but a prawn croquette? The temptation was too great. It was irresistible.And what a treat was in store,they were the most delicious croquettes that one could ever dream of and they left us wanting more.Its a good thing they freeze well, so now I will always have some to hand either for a TV snack,tapas,luxurious dinner starter or an item for my tasting menu.

This recipe, which is based on Holtkamp’s, is quite long, and it makes a lot, but croquettes freeze really well: make them up to the point when you coat them in breadcrumbs, then freeze, ready to thaw and fry as required.Ottolenghi suggests serving them with a simple green salad and a sharp, lemony dressing.His other serving suggestion as a snack with some lemony mayo or mustard,we found too rich and we felt it needed something to contrast the rich bechamel rather than accentuating it.I would suggest there fore serving them with a chilli jam,sriracha sambal oelek or a coriander dipping sauce.
110g unsalted butter
3 shallots, peeled and finely chopped
700g raw tiger prawns, shell on
120g plain flour
250ml whole milk
4 sheets (or 6g) fine-leaf gelatine, soaked in cold water
4 eggs, separated: you need all 4 whites and 2 of the yolks; use the remaining yolks in a mayo, custard or pasta
50ml double cream
⅛ tsp cayenne pepper
2 drops Tabasco
10g parsley leaves, finely chopped
10g tarragon leaves, finely chopped
Salt and ground white pepper
200g panko breadcrumbs, half of them finely blitzed in a food processor
About 400ml sunflower oil, for frying
2 lemons, cut into wedges, to serve


Advertisement
On a medium-high heat, melt 30g butter in a large saucepan for which you have a lid, then fry the shallots for two to three minutes, until golden brown. Add the prawns, fry for a minute, then pour over 300ml just-boiled water. Cover and cook for two minutes, until the prawns are just cooked, then strain the liquid into a bowl, pressing down on the prawns with a back of a spoon or ladle to extract as much flavour as possible: you should end up with about 340ml of prawn stock.
Leave the cooked prawns to cool a little, then peel and devein them. Discard the prawn skins and the shallots, and chop the flesh into roughly 0.5cm pieces.
Put the remaining 80g butter in a medium saucepan on a medium heat and, once it starts to foam, stir in 110g flour and cook for three minutes, stirring constantly. Add the prawn stock bit by bit, until combined, then add the milk, also in instalments. Turn the heat to medium-low and cook the sauce for eight minutes, stirring, until it’s thick and shiny.
Squeeze the water out of the soaking gelatine leaves, add them to the bechamel, then take the pan off the heat and stir to dissolve. Stir in the egg yolks, cream, cayenne, Tabasco, herbs and chopped prawns, and add an eighth of a teaspoon of white pepper and three-quarters of a teaspoon of salt, then leave to cool.
Using two dessert spoons, divide the bechamel mix into 60g portions, and place on two plates lined with greaseproof paper. Refrigerate for at least an hour, to firm up, then wet your hands (this stops the mix sticking to them) and roll each portion into a 3cm-wide x 7cm-long sausage. Refrigerate again while you prepare the coating.
In a small bowl, gently whisk the remaining flour into the egg whites. Put the fine panko in a second bowl and the unblitzed panko in a third. Roll one prawn sausage first in the fine panko, then in the egg white and then in the coarse panko, making sure it’s properly coated with each layer, and put on a tray lined with baking paper. Repeat with the remaining sausages.
Heat the oil in a medium saucepan on a medium flame. To check it’s at the right temperature, drop a pinch of panko into the pan: the oil is ready if it turns golden-brown within 10 seconds (if you have a thermometer, you’re looking to get the oil to 180C). Fry a few croquettes at a time – don’t overcrowd the pan – for a total of three minutes, turning them once halfway (be gentle), until crisp and golden brown all over. Using a slotted spoon, transfer to a wire rack lined with kitchen paper, to absorb any excess oil, sprinkle with a pinch of salt and repeat with the remaining croquettes. Serve hot with lemon wedges alongside.
Email Post