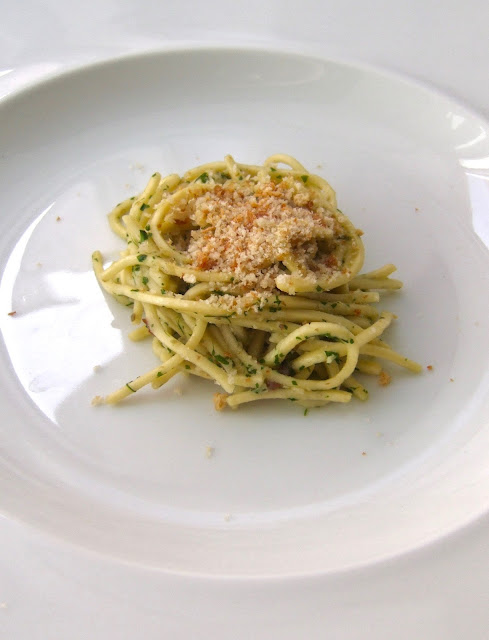 ITALIANS MAY DOWN SPAGHETTI
"Pastasciutta, 40%  less nutritious than meat,fish or pulses ties todays Italians with its tangled threads... ...The defenders of pasta are shackled by its ball and chain like convicted lifers or carry its ruins in their stomachs like archaeologists.And remember too that the abolition of pasta will free italy from expensive foreign grain and promote the Italian rice industry".

Since living in Portugal I have been learning its history and of what a powerful nation it once was.I have also been tracing the development of its culinary heritage.My most recent discovery goes back to the period when Portugal or Lusitania was part of the Roman Empire.Lisbon was then called Ollisipo.Between 1991 and 1995, during renovation works which were being carried out at the Millenium bcp building in the downtown historical Pombaline centre of Lisbon, now called Baixa, excavations uncovered archaeological structures left by previous civilisations. Stretching almost an entire block, up from the Triumphal Arch in Rua Augusta, underneath the foundations of the current Millenium bcp head office the remains of Roman Garum producing tanks were found. Garum,its ancient name, or colatura di alici as it is now branded, is probably the best thing many of you have never heard of.It is the 'ketchup' of ancient Rome that has now become the must have modern day secret culinary ingredient.No more Nam pla*. I loosely call it 'ketchup' as the word might have come from the Chinese koechiap "brine of fish,"which is exactly what this is.You can also still see the biggest ruins of Garum-producing tanks in Tróia, Portugal. Apparently, Olissipo (Lisbon) got pretty wealthy by exporting it to the rest of the Empire.The garum of Lusitania ( present-day Portugal) was also highly prized in Rome, and was shipped directly from the harbour of Lacobriga (present day Lagos in the west Algarve). In Almunecar, on the Spanish Costa, are the ruins of more Roman garum 'factories' - big rock beds for drying and fermenting the fish, on the shore. There may be others in other towns, I just know Almunecar is very proud of theirs. The Antiquarium de Sevilla below the Metropol Parasol has a remains of a Roman garum factory and some houses preserved in situ.
There is very often a very good reason why a recipe is called forgotten. Before you go any further let me advise you that making authentic Roman Garum is not for everyone; anyone can make it but does everyone want to?I have not been brave enough to try making my own Garum,which can be achievable if you have the time,patience,resources and access to the right fish to brine.Living in the right climate and right conditions I may well try it,but in my own time and when there are no cats or paying guests around.
If you want to cook an authentic Roman dish you'll need this sauce, especially when you are using recipes from De Re Coquinaria,a collection of Roman cookery recipes.

Meanwhile I thought I would use the modern day equivalent, colatura di alici ,and cook a very multi-sensory Roman inspired dish.Sympathetic to the Futuristic movement and Marinetti´s pasta free vision? - maybe not, but the dish in question comes from Osteria Francesana,Chef  Massimo Bottura´s Michelin starred restaurant in Modena.Like Bottura I dont serve spaghetti regularly here at casa rosada as I believe our guests would feel cheated by something so commonplace.This recipe I have to say is the exception to the rule.
On one occasion however, some guests returned home from a day trip and presented me with a pasta  that I had never before set eyes on.Spaghetti alla chitarra. 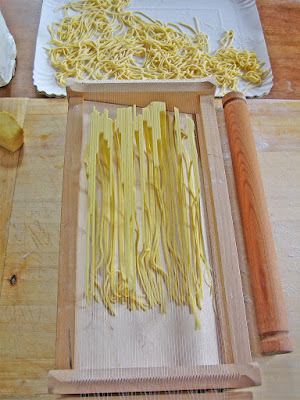 The name of this spaghetti comes from the tool (the so-called chitarra, literally "guitar") this pasta is produced with, a tool which gives spaghetti its name, shape and a porous texture that allows pasta sauce to adhere well. The chitarra is a frame with a series of parallel wires crossing it. They asked me if I would prepare spaghetti al aglio, olio e peperoncino.I was flattered.I cook this late night Roman staple on quite a regular basis, not only for its astonishingly full flavour but because of its speed in preparation.10 minutes from start to finish.With the knowledge that this dish proved to be more widely popular than I had previously thought I upped my game and took this dish to another level using the colatura di alici fish oil.The dish is called Spaghetti alla chitarra cetarese.The pesto for this spaghetti is made with hand chopped anchovies,capers and pine nuts,garlic and colatura di alici.The type of spaghetti used is quintessential to this dish as the pasta must be able to absorb the sauce without losing its bite.The secret is to boil it in salted water until half cooked,then drain it and return it to the warm pan with the fish oil,pesto and a garlic cream.The spaghetti is finished off in the style of a risotto adding more fish stock as needed.The spaghetti is served with a topping of crunchy bread crumbs,as you would grated parmesan.

FOR THE PARSLEY OIL:
100g parsley
250 ml extra-virgin olive oil
5g Flor de sal
Blanch the parsley leaves in salted boiling water for 20 seconds.Chill them immediately in iced water, then pat dry.put them in a blender with the oil and salt and process to a velvety texture.Add more oil if required.

FOR THE GARLIC CREAM:
1 head of garlic,cloves halved
500ml whole milk
a pinch of Flor de sal
a pinch of sugar Remove the heart from each garlic clove.Marinate in half the milk overnight,covered with cling film (plastic wrap).Discard the milk and reserve the garlic.Bring the remaining milk to the boil with the salt and sugar.Blanch the garlic for 1 minute in the milk,then remove it. Repeat this twice more.Put the garlic in a separate container and use just enough of the milk to blend it to a creamy paste.
TO SERVE
250g spaghetti all Chitarra
extra-virgin olive oil
pesto cetarese
800ml fish stock
colatura di alici (anchovy extract)
200g toasted breadcrumbs
Put the spaghetti in a large pan of salted boiling water and cook it until it is half cooked.Drain the spaghetti and return it to the warm pan with 20 drops of colatura di alici,1 tablespoon of oil,the garlic cream and 1 tablespoon of pesto.Finish cooking it as if it were a risotto,adding more fish stock and pesto as required.At the very end,stir in some parsley oil.Serve in a neat mound in the centre of a large soup dish and top with a carpet of toasted breadcrumbs as if they were grated parmesan.Change into a clean toga, call Bacchus and savour the experience. 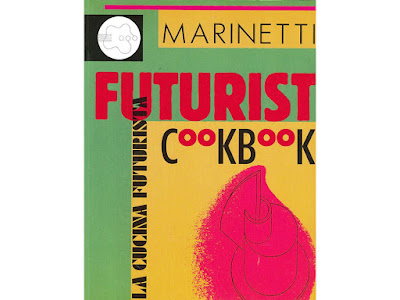 We liked this dish immensely and it tasted even better in the light of the newly acquired knowledge that this ancient condiment had originated in Portugal.Along the line we learnt about how Marinetti ranted against Spaghetti.Having run Cafe Panini at the Estorick collection, the first museum of Futurist art to open in London, also gave meaning to what we were eating.


* Technically, Nam Pla is much, much saltier than garum. This is because of the manufacturing methods. Thai fish sauces can be fermented for up to 18 months, whereas garum would take about half that. They are also made with a much higher ratio of salt to fish than is indicated for Roman sauces. An ancient sauce was made with one part salt to seven parts fish, while the ratio in Thai sauces can be 1:3 or even 1:1. Now this is not to say Nam Pla cannot be utterly delicious in the context of Thai cuisine. But Garum it ain't.