You just can´t beet them 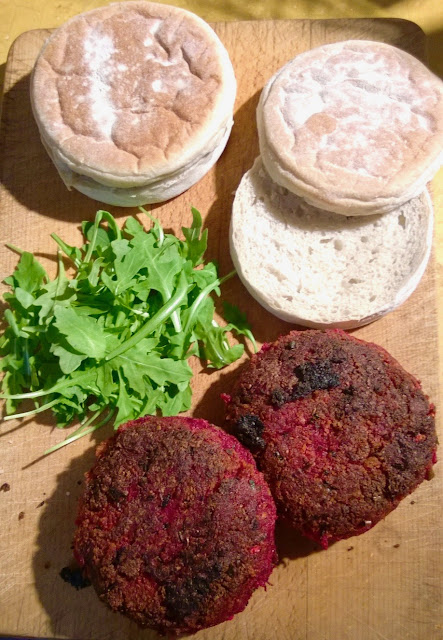 "I have always loved hamburgers, but the taste of vegetarian hamburgers isn't anywhere close. I would like to know if there is any way to reproduce the flavour of meat, using no meat in the process?"

OMG: I saw this question on a thread in the Guardian newspaper recently.The article in particular was how to cook vegetarian scotch eggs.Why oh why oh why would you want to? I just dont understand the reasoning behind converting classic meat dishes into meatless ones.Vegetarian scotch eggs are to me a contradiction in terms.

Isn't the point of a scotch egg the sausage meat? As soon as you remove the sausage meat, it is no longer a scotch egg.If you remove curry powder from a curry, is it still a curry? or is it a stew?If you want to eat a scotch egg but don't want to eat sausage meat well then surprise surprise, you're not actually eating a scotch egg.
If you were a vegetarian I can understand that you might prefer something even less like the original meat-based version,but to try and create a meatless version of the same thing makes no sense to me.
Supermarket and health food stores have abounded with these kind of products ever since Linda Mc Cartney  unleashed these kind of replicants on an unsuspecting market.Why unsuspecting? Because many of these meat replicants are soy-based  or gluten-based.Wheat gluten, especially, is often the basis for imitation meats resembling beef, chicken, duck (see mock duck), fish, and pork. When cooked in broth, gluten absorbs some of the surrounding liquid (including the flavour) and becomes firm to the bite.
Often referred to as “fake” meat, (author Trumps at this point) these products are actually quite real. They are not imaginary or inedible, but strikingly realistic versions of animal products in every form. A look back at the etymology of the word “meat” actually shows us that it is rooted from the Old English term, “mete,” which literally meant “item of food.” Semantics aside, this leaves some non-vegans like myself to wonder why vegans, who eschew all animal products, would want to eat foods that have the same tastes and textures of animal flesh?
The answer is quite simple once you understand why people choose to remove animal products from their lives in the first place. As it turns out, vegans did not stop eating animals because they didn’t enjoy the taste. Who doesn’t enjoy the taste of a juicy hamburger, or a few slices of bacon? However, vegans chose to stop consuming and using animals on an ethical basis. (It should be noted that there are some people who eat a plant-based diet for health reasons, but these people are not “vegan” as they still use animals in other ways.)Don´t get me wrong I am definitely not a vegetarian, but I do love vegetables.I have to admit to trying a vegetarian lifestyle while a student. The flavour of meat cannot be replicated by vegetables, but there are definitely certain things you can do to help gain flavour -Vegetarian spaghetti carbonara is one example where pistachios are used very successfully to replicate the taste of pancetta.Smoke seasoning using liquid smoke is a commonly used method for acquiring flavour.When you think burger you think char-grilled, so sparingly using liquid smoke, because it is very concentrated, can give you that enhancement you require.Grill seasonings and rubs like chermoula, chimichurri, mesquite and hickory will impart nice flavour.When it comes to texture and you are thinking of something meaty without the meat,mushrooms are an excellent option,provided you like them.
Mushrooms provide a meaty,chewy consistency and are also great conduits for absorbing flavours. There's always much room for mushroom in my cooking repertoire!Make a sandwich with thick slices of stir fried portabello mushrooms for a beefy like option.
Again in sandwiches use dairy provided you are not going "vegan", using cheese as you would with meat is excellent in providing that extra "oomph"I'm not opposed to vegetarians, but I do feel that meat has played a huge part in the evolution of the human species. I believe it is your freedom to choose whatever you want to eat. In the end, my advice is to really expand your horizons for flavour and adapt to all the wonderful veggies this world has to offer. Indian, Middle Eastern, and Asian cuisines usually have great choices for vegetarian options. Also, if you are philosophically ok with being a pescatarian, seafood options are plentiful.

The secret to the perfect beetroot burger,in one single word – roast. There is no other cooking method to better enhance the flavour and get the most out of your beetroot than roasting them.Cheaper, too, than a steak, is worth noting. Sustainable, healthy, delicious, – what’s not to love?
Makes 4 half pounders,8 quarter pounders or 36 Kofte

FOR THE BURGERS
300g / 10oz yesterdays bread
Tbsp soya sauce
3 cloves garlic crushed
large handful chopped fresh coriander
200g soft goats cheese
3 small hot chillies with seeds,chopped finely
1  banana shallot,finely chopped
Wash and trim the beetroots. leaving the roots intact so the colour doesn´t bleed. Bake them in individual foil parcels in a medium oven until cooked, pierce with a skewer after 45 minutes. Skin and slice them thinly as soon as they´re cool enough to handle. Chop the tomatoes coarsely.Heat the olive oil in a pan and fry the onions and garlic gently until softened but not coloured. Pour over the vinegar, and add the tomato,beetroot slices and seasoning.Cook with a lid on very gently for an hour. Check the moisture level from time to time.Allow the mixture to cool slightly.
Crumble the bread into a large mixing bowl.Stir in the beetroot mix.Chop the,chillies and coriander and add to the mix.Crumble in the goats cheese.Form the mixture into patties the size you want or if making Koftes roll them into bite sized balls.Note: If the mixture is too moist add some breadcrumbs until you achieve the desired consistency.Reserve in the refrigerator over night or for up to 3 days.The burgers can also be frozen.