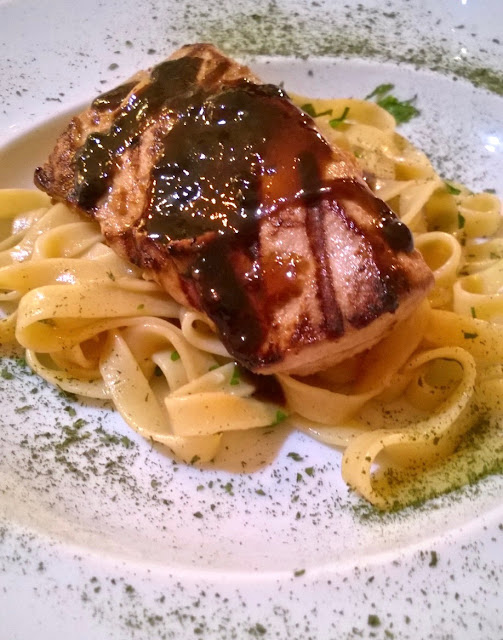 I say this is simple, but I do know that there are some people who find cooking fresh tuna a bit daunting.I don’t think it is all that tricky,you just need a good fool proof method.....
I found a recipe for Tuna steak with a Teryaki balsamic reduction and was intrigued to give it a try. I have always used Asian inspired flavours when cooking tuna and this was a new twist. I am very thankful I stirred it up. The Balsamic reduction is so complimentary to the recipe, it made this dish stand out. I liked it so much, I have now repeated the recipe twice this week(see below). Make sure you only sear the tuna briefly on each side so you wont over cook it. Also, it's best to use a cast iron skillet for this recipe so you get a nice sear on the fish.The balsamic reduction sauce I used to glaze the tuna worked so much better than I ever thought it would….the glaze was detectable but let the tuna steak itself take center stage.
I had lots of leftover syrupy glaze  that I  put in the fridge and have been using on salads and such like ever since….There's nothing quite like grilled Tuna and this recipe does not disappoint. 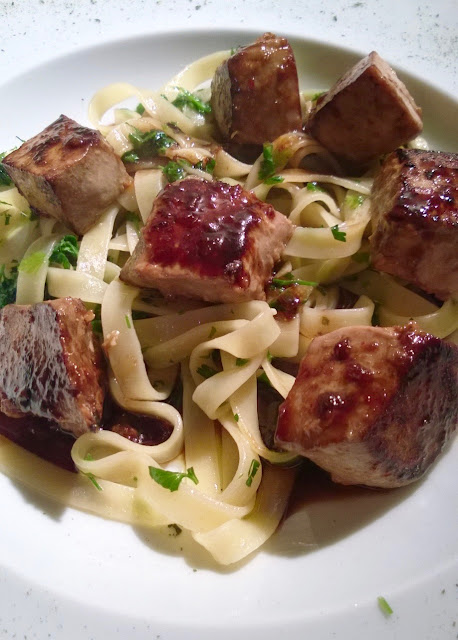 250ml balsamic vinegar reduced by 2/3
300ml chicken stock
50g sugar
4 soup spoons of Kikkomam soya sauce
4 soup spoons of mirin or sherry
cornflour to bind
combine all the ingredients in a small pan and reduce by half.
Bind the sauce with a little cornflour.

FOR THE MARINADE (serves 4)
3 tbsp soya sauce
juice of 1/2 lime
1 tbsp rice vinegar1 tbsp sesame oil
1 pinch of Piri piri flakes 6 thin slices of fresh ginger
2 garlic cloves crushed
In a large bowl combine all the ingredients for the marinade.
add the tuna steaks and toss thoroughly in the marinade mix.
refrigerate for at least 1 hour but not more than 6,turning once or twice.

Bring a pan of boiling water to the boil with flor de sal and some olive oil.Add the pasta and cook for the time stipulated on the packet.When cooked drain,add the marinade from the tuna steaks and stir through.Keep warm while you cook the tuna steaks on a hot griddle pan.Re-heat the teryaki balsamic reduction.

TO SERVE
Quickly heat through the previously cooked pasta and garnish with chopped flat leaf parsley.Divide the pasta between four soup plates,top with the tuna steaks and finish with a topping of teryaki balsamic reduction.

How to cook tuna steaks perfectly every time
Try to buy tuna that’s about 1½ cm thick.
Marinate the tuna steaks and rub all over, so the tuna is evenly coated.
Put a non-stick griddle pan or frying pan on a high heat and heat up the dry frying pan for 1 minute. Do not put any oil in the pan.
Put the tuna in the hot pan and cook for 1-2 minutes on each side. Then remove from the pan immediately.
Eh voila! You should have perfectly cooked tuna that is brown on the top and bottom but pink in the middle. And, if you use a griddle pan, it will have pretty char lines too.
If you prefer tuna that is cooked all the way through (but not over cooked) cook the tuna for 3 minutes on each side and it should be just cooked through. If in doubt, cut one open to check.
Email Post