Some like it hot Ojingeo Bokkeum (Korean Spicy Stir-fried Squid). 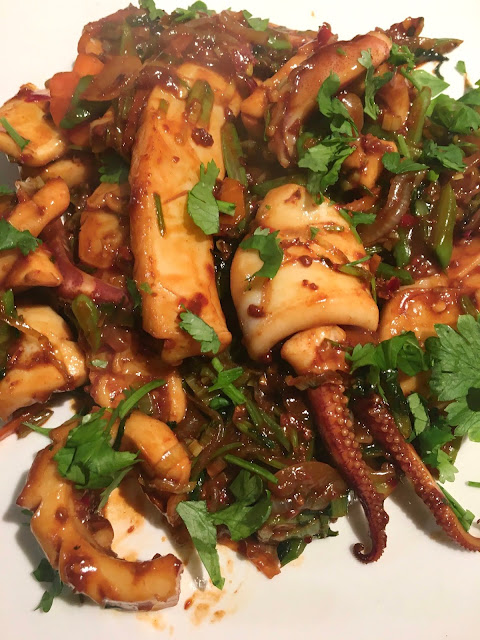 Purists may throw their hands up in horror, but one indicator that a cuisine is beginning to get accepted internationally is that its flavours and ingredients become incorporated into the cuisines of chefs in other countries, and new fusion dishes begin to appear. The new dishes may bear absolutely no relation to the original national cuisine (can you get a Chicken Tikka Massala in Delhi, or a Vindaloo as you think you know it in Goa?) but maybe, someone trying the fusion dish might be tempted to try the unadulterated national ingredients which gave birth to these unfamiliar flavours. This “Korean squid” recipe is authentic, not fusion, and features Gochujang sauce mixed with soy sauce, rice wine and either honey or sugar, and maybe a bit of sesame oil. The paste is as old as the hills in Korea, where it forms the backbone of many national dishes such as spicy barbecued pork, but cooks in the west have been extolling its virtues for decades too. Now, it’s taking over the world. 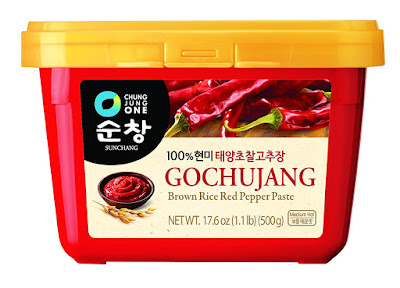 It’s going to be a long time before Korean food is accepted in the same way that Thai flavours like coconut and lemongrass, which can be found everywhere in Asian fusion cuisine. It has made a very small start, mostly with the help of TV chefs. No one can accuse Nigella Lawson of not having her perfectly manicured pinkie on the pulse. When she included Gochujang in last week’s episode of Cook, Eat, Repeat, using it to add umami heat and depth to her noodles and lamb shank aromatic broth, she was merely picking up on the growing popularity of the fermented chilli paste, due to our newfound love of all things Korean, from kimchi to bibimbap. Seeing Nigella use this ingredient jogged my memory that I had a Korean dish bookmarked and this seemed the perfect time to try it.
Ojingeo bokkeum is a spicy stir-fried squid dish. Ojingeo is squid, and bokkeum refers to the dishes that are stir-fried. If you love squid and spicy food, this flavour packed dish is easy to make with a few staple Korean ingredients. Koreans love squid, and this spicy dish is highly popular both in their homes and restaurants. For this dish, the squid is cut into bite-sized pieces and stir-fried in a slightly sweet gochujang (Korean red chili pepper paste) based sauce along with some vegetables. The red spicy sauce adds a burst of spicy flavor to the crisp vegetables and tender squid. Lawson keeps it on hand “to pep up a jaded palate or a pallid-flavoured ingredient". "Yes, you do need to hunt down this fabulous flavoured paste,” she says, “but once you have it, the culinary kingdom is yours.” How would you describe gochujang to someone who’s never tasted it before? “Think chilli with a sweet and smoky hit of almost liquorice intensity.” She´s spot on there. There´s actually nothing new about gochujang. Ten years ago Nigella herself included it in her book "Nigella´s Kitchen".
In the past, a Nigella endorsement of a particular product has boosted sales and even resulted in supply difficulties. The problem will start when people without access to a Korean food store try to get their hands on some gochujang. You could use any chilli paste you like, but once tried you will never allow yourself to run out of this exuberantly coloured paste again.
Ojingeo Bokkeum (Korean Spicy Stir-fried Squid)
I used onion, carrot, zucchini, and spring onions in this recipe. Green cabbage and bell peppers are also common, fresh hot chili peppers also, but the heat can be quite fierce with certain varieties.It all depends what intensity of heat you are looking for? The seasoning mix is made with staple Korean ingredients, such as gochugaru (red chili pepper flakes), gochujang (red chili pepper paste), garlic, ginger, etc. This recipe is certainly hot, but not fiery hot. If necessary, you can adjust the heat level to your taste by using more or less gochugaru.

Combine all of the sauce ingredients in a small bowl.Clean the squid (see note). Cut the body into about 3/4-inch rings (or slit the body open and cut into 3/4-inch wide, 2-inch long bite size pieces). Do not make the pieces too small as they will shrink when cooked. Cut the tentacles into the same lengths. See note if you want to score the squid.Mix the squid with the seasoning mix and marinate while preparing vegetables.Slice the onion. Cut the courgette and carrot into half lengthwise and thinly slice into 2-inch long pieces. Cut the spring onions including the green part 2-inches long.Heat a large skillet over high heat and add the vegetable oil. Add the carrots, followed by the onions,courgette, peppers and then the spring onions. Stir fry the vegetables quickly only until they start to wilt, about 2 minutes.Stir to mix the vegetables and the squid well for a minute. Drizzle the sesame oil over. (Do NOT overcook the squid. The squid will get tough.) Serve warm with a bowl of rice or on top of rice.