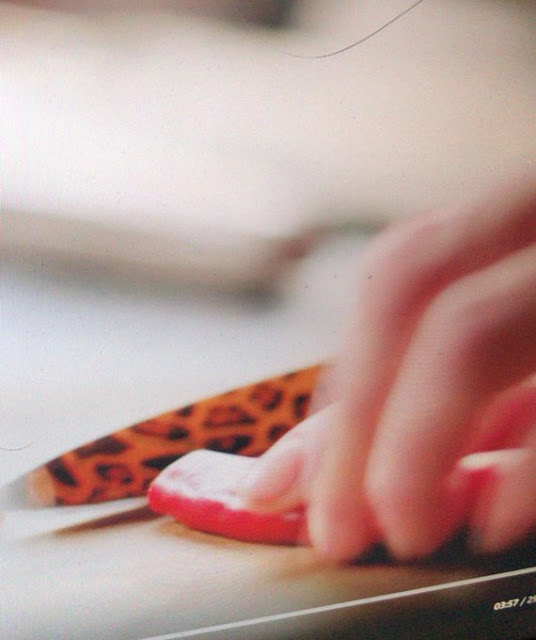 Dear santa: “All I want for Christmas is to know where, oh where
@Nigella_Lawson got her leopard print knife?

I saw a possibility of history repeating itself last week. Remember Delia Smith ?  Who could possibly forget what happened when UK chef Delia included five tablespoons of liquid glucose in her 1990 TV recipe for truffle torte. The Famous Chocolate Truffle Torte. Yes, this is the one where diabetics were deprived of their essential, as the nation ran out of liquid glucose, because of (it has to be admitted) the power of television . Within days you couldn’t find a single drop in the entire British Isles. It happened again 5 years later when she was credited with causing a national cranberry shortage. So beloved were her recipes that supermarkets would frequently sell out of the ingredients overnight — something that came to be known as 'the Delia effect'. How many people know that in addition to her work as a food writer and broadcaster, she created the cake on the cover of the Rolling Stones’ album Let It Bleed and featured on artist Peter Blake’s 2012 update of his cover for The Beatles’ Sergeant Pepper’s Lonely Hearts Club Band. When these so-called TV chefs recommend a food or kitchen item, supermarket shelves get ransacked for it... 30 years on we might be about to witness The Nigella Effect. Nigella´s new show Cook, Eat, Repeat, has hit TV screens, and two episodes in we are already loving it and hitting social media with our comments. Making a frequent appearance on Nigella´s shows has been a paring knife the blade of which is decorated with a leopardskin pattern.
While the first episode set out to showcase a number of new recipes from the TV chef it was a single utensil that really captivated the attention of viewers. Just three minutes into the show, Lawson started preparing her first dish, a Fish Finger Bhorta, by slicing a single red chilli using a sharp kitchen knife that featured a leopard print blade.
So much of Nigella’s output involves viewers being seduced into purchasing not just her new tie-in cookery book, but buying into the whole lifestyle of conspicuous consumption. It’s not only me who wants what Nigella has, namely, a candy pink Le Creuset casserole that uncannily matches her beautiful cashmere cardigan, not only me who is putting a kitchen knife with a decorous leopardskin motif on their Christmas list.
Let the gouging season begin! 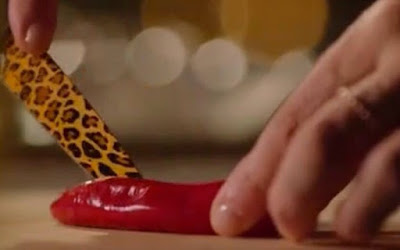 The eye-catching utensil quickly went viral on Twitter, with hundreds of people asking where they could buy one for themselves....

“I adore Nigella and need a leopard print knife immediately,” one person wrote.

Another added: “I need that leopard print knife even if it’s just to butter toast.”

A third person commented: “I NEED THAT LEOPARD PRINT KNIFE I AM SCREAMING.”

Elsewhere, others called for the chef to launch her own range of kitchenware. Sorry to disappoint guys but the Nigella cookware range has been available for some years now, in matching baby blue and cardigan pink.

On Tuesday, Lawson responded to the mass of enquiries, revealing the company behind the coveted knife is Swiss brand Kuhn Rikon.

“A short thread to answer some queries after the episode of #CookEatRepeat,” she wrote.

“So many of you asked about the leopard print knife! I bought it years ago (from the Cook Shop in Burford) but I think it’s made [by] KuhnRikonUK.”

However, the chef went on to dash her follower’s hopes of ever being able to get hold of
one themselves, adding: “Sadly no longer available. Perhaps they’ll bring it back!”
Despite the overwhelming reaction to Lawson’s knife, this is not the first time it has featured on her cooking series. In 2015, fans took to Twitter to discuss the chef’s kitchen utensils, from her miniature pans to stylish paprika pots. But, once again, it was her leopard print knife that really stole the show.

“A moment for @Nigella_Lawson's leopard print knife in last night's #SimplyNigella,” one person wrote on Twitter at the time.

Another person added: “All I want for Christmas is to know where, oh where @Nigella_Lawson got her leopard print knife on #SimplyNigella #leopardprintlove.”

Simply Nigella saw an increase in sales for a number of kitchen items that were used by the chef during the show, including a Nordic Ware Heritage Bundt cake tin and raspberry pink KitchenAid mixer. The former experienced a fourfold rise in sales, while sales of the mixer soared by 55 per cent at John Lewis. The animal print knife is currently unavailable to buy on the retailer’s website. I think you guys @Kuhn Rikon have missed a trick here. With everyone cooking at home in lockdown you could have shifted case loads of these.
The world believes that the vaccine is what will save us from Covid-19, but after two shots in the arm of Nigella’s ‘Cook, Eat, Repeat’, I´m pretty sure it´s the Domestic Goddess that is actually our pandemic saviour? I´m going in guys...