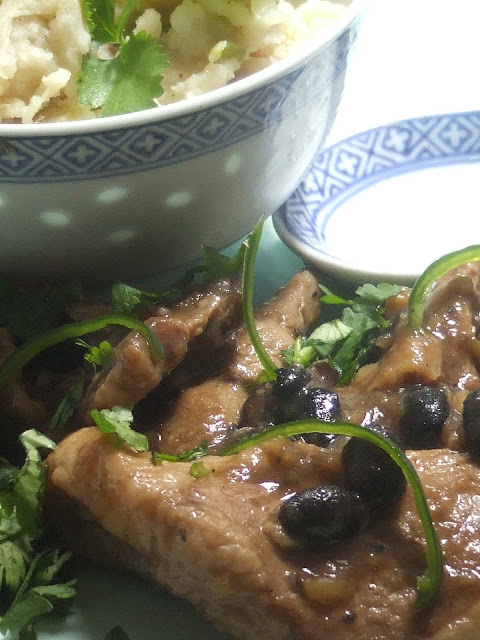 A Feijoada in the Brazilian style, uses black beans as opposed to the Portuguese version, which uses pinto or butter beans.I am never convinced whether the conquistadores taught the pig and bean thing to the natives or vice versa, but surely the Brazilians the Spanish and the Portuguese are top of the league when it comes to pig and beans in a pot. I have never been a great fan of the Brazilian version, but since it is Chinese New year and the year of the pig I decided to improvise and have come up with a pan-asian meets Iberican belly pork, braised in a garlic and black bean sauce.
The black beans from Asia are soybeans, which are  fermented and preserved in salt.Also known as Chinese black beans  or salted black beans, they have a very strong, salty flavour and are generally soaked for a half hour or so in fresh water before being added to a dish.Black beans are particularly popular in Brazil, Spain and Portugal  (frijol negro in Spanish, feijao preto in Portuguese), or Mexican black bean or turtle bean. Their flavour is stronger and fuller, bearing undertones of meat or mushrooms.So taking a recipe from the orient I replicated the saltiness of the recipe by the seasoning of the meat as opposed to the beans.Well I thought; living at the far easternmost end of the Algarve, this could become a dish from the Portuguese Orient: 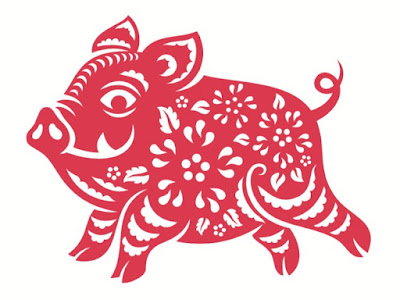 1 kg (2 pounds) entremeada( belly pork), cut into strips about 1½ inches wide and seasoned with flor de sal
4 large cloves garlic, finely chopped
3 green chillies,deseeded and cut into thin strips
1 stick of lemongrass,finely chopped
1 tablespoon finely chopped ginger
2 large spring onions, finely chopped
1 teaspoon Flor de sal
1 1/2 teaspoons sugar
1 tablespoon dark (thick) soy sauce
3 tablespoons madeira wine or dry sherry
1 1/2 cups water
2 tablespoons sunflower oil
1 410g tin black beans, rinsed
1/4 cup coarsely chopped coentros (coriander)
Prepare the garlic, ginger,lemongrass, spring onion and chillies on a plate. For the seasoning liquid, stir together the salt, sugar, dark soy sauce, Madeira and water.
Heat a wok, heavy pot or deep skillet over high heat. Swirl in the oil, then add the garlic, ginger and green onion. Cook, stirring constantly, until fragrant, 15 to 30 seconds. Stir in the pork and black beans. Continue cooking until the pork turns white and is coated with the other ingredients, 1 to 2 minutes. Stir in the seasoning liquid,and bring to the boil.
Transfer the contents of the wok to a large casserole, cover, then reduce the heat to simmer. Cook until the pork is chewy-tender, about 1 hour, stirring 2 to 3 times. The dish can be made up to this point and then refrigerated overnight before continuing.
Skim most of the fat from the sauce (the fat will be easy to remove if the pork has been refrigerated and the fat is solidified; if not refrigerated, temporarily transfer the pork to a bowl to make skimming the fat easier).
Heat the pork and sauce over medium-high heat until the liquid comes to a vigorous simmer. Cook, stirring frequently, until the sauce has reduced and thickened enough to coat the pork, 8 to 10 minutes. Remove from the heat, stir in the coriander and transfer to a serving plate or shallow bowl. Serve with rice.
Email Post