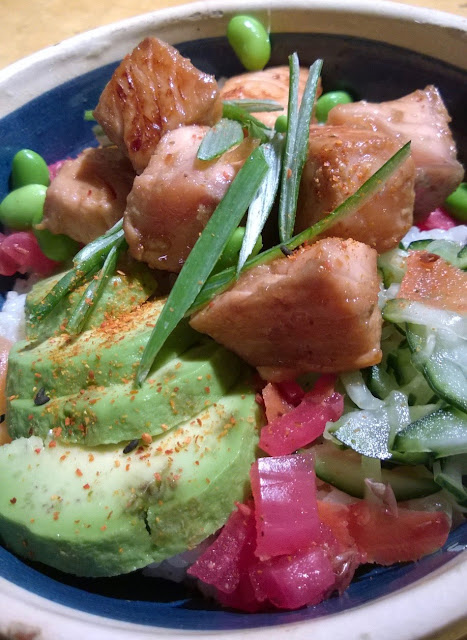 Let’s be frank, the Hawaiians stole the poké (po-kay) bowl from the Japanese and their original“chirasushi”,just as the Japanese borrowed tempura from Portugal.Poke and “chirasushi”, or scattered sushi, are flavours united by the huge Pacific Ocean.
The Hawaiian dish poké was traditionally made by fishermen, combining trimmings from their catch of “ahi” tuna (or sometimes octopus) with seaweed and sweet onions. Serving it on a bowl of rice with soy sauce and sesame oil is a nod to the Japanese migrants who worked on the Hawaiian pineapple and sugar cane plantations in the late 19th century.

Far more recently, poké’s popularity has been lifted by hipsters and health-faddists. For the former, it fits with their obsession with sriracha, mayonnaise and pickly, fermented stuff, and for the latter with their carb-, gluten-, meat-free urges. As poké slips neatly into both camps’ food arsenal, it has become a worldwide phenomenon.
Gone are the days when pasta restaurants were the only ones where one could choose everything that made up the dish, from the type of pasta to the ingredients and the sauces. The same logic is now available in spaces with poké bowls, trendy Hawaiian bowls that look good on any Instagram feed and are eaten with chopsticks.
They began to become famous a few years ago in cities like New York or London. The Portuguese are among the largest consumers of rice and fish in the world and so the Portuguese cities not wanting to be left behind now abound with establishments where you can poke to your hearts content.
Having become a dedicated follower of the new fashion of the tropical Hawaiian poké and the delicate Japanese chirasushi, I am stealing the concepts back and making them even better by combining the the smokiness of slightly scorched salmon pieces with the delicacy of smoked salmon,avocado, cucumber and shredded nori for a more interesting poke.
Barely seared and and cured teriyaki salmon poke bowl
150g skinless salmon fillet, pin-boned
150g smoked salmon
2 spring onions, white part very finely chopped, dark green part finely chopped
1 garlic clove, crushed
1 tsp minced ginger
1⁄2 tsp shichimi togarashi or dried chilli flakes, plus extra to serve (optional)
1 tbsp soy sauce
3/4 tbsp honey
1 dessert spoon sesame oil
150g sushi rice, well rinsed
2 baby baby cucumbers, sliced into rounds
1 dessert spoon rice wine vinegar
1 small ripe avocado, sliced
1/2 sheet nori, shredded
Cut the salmon into 1.5cm cubes and place in a bowl. Add the white part of the spring onion, garlic, ginger, shichimi togarashi or chilli flakes, soy sauce, honey and 2 teaspoons of the sesame oil and toss until well combined. Set aside in this pimped-up teriyaki sauce to marinate for 15 minutes.
Meanwhile, place the rice in a saucepan, add 500ml water and bring to
the boil. Reduce the heat to low and simmer, covered, for 10 minutes. Remove the pan from the heat and stand, without removing the lid, for 10 minutes or until all the water has been absorbed and the rice is cooked. Stir through the dark green part of the spring onion and the remaining sesame oil.
Heat a large non-stick frying pan over high heat. Add the marinated salmon and cook, turning, for 1–2 minutes or until the sides are slightly scorched. Remove from the heat.
Toss the cukes with the vinegar in a bowl.
Divide the rice among four bowls and top with the smoked salmon, scorched salmon, cucumber, avocado and shredded nori. Scatter over extra shichimi togarashi or chilli flakes, if desired, and serve.
Email Post