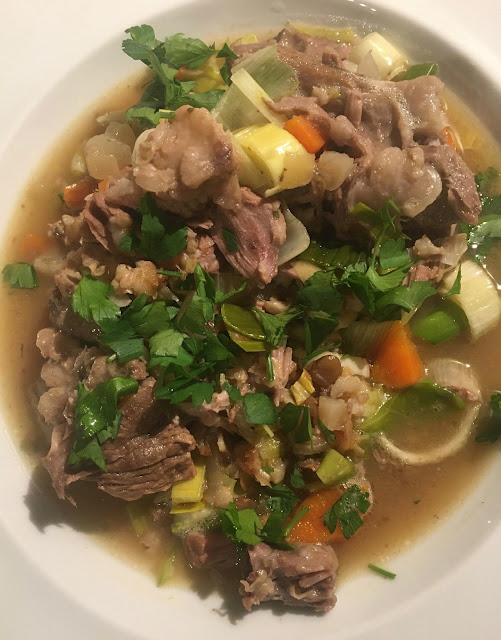 As it's Burns Night this weekend (Saturday 25 January), I’ve put together one of my favourite recipes for a simple celebration meal.Forget the haggis and whisky sauce, this traditional Scotch broth is straightforward and delicious.
The quintessential Scottish dish for several centuries! Rich, robust and flavoursome, Scotch Broth represents everything that is good about rustic home cooking.
Traditional Scottish housewives, ever thrifty and knowing how to make much of little, knew how to gather up whatever fresh vegetables were available, add them together with lamb, mutton or beef, some barley, split peas and lentils (all staple Scottish ingredients), and simmer the mixture low and slow for hours to achieve a meal that by dinnertime would nourish both body and soul.There are as many variations of Scotch Broth as there are cooks in Scotland and this is my interpretation from memory.Growing up in Scotland in the 1950s and early 60s, there were two types of soup served at every Scottish table: Lentil Soup and Scotch Broth, both are hearty, filling and inexpensive ways to feed your family.
The first time I had this dish was in a small homely restaurant in Dunbar,made for us by  a lady called Mrs Maynes. My father took me there for an impromptu lunch after accompanying him in true bracing seaside weather round the links*.I never enjoyed golf as a game but what I did enjoy was the walking and taking in of the landscaping of a particular course of which there are many fine examples in the UK.
It was the perfect meal for a cold afternoon and left me feeling happily nourished,warmed through and ready to continue my day. Scotch Broth is a hearty soup made with meat stock (traditionally mutton) and vegetables and thickened with barley.To cook it authentically the meat must cook in the soup,adding its flavour to the vegetables.It can then be eaten as a separate course after the soup,or separated from the bones and added in small pieces to the soup,as preferred,much in the style of how Italian meals are constructed. 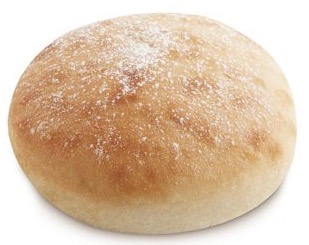 It must be accompanied by a bap.Baps are soft, wodgy, flattish bread rolls made with white flour,lard,yeast,milk and water and then dusted with flour.Particularly associated with Scotland,they are traditionally eaten at breakfast.The closest I have come to them outside of Caledonia is the Spanish bread roll,pan cristal.

Cook the onions and garlic in the lard or butter until softened, 4-6 minutes. Add the lamb, herbs, barley, split peas, salt and broth. Bring to a boil, reduce the heat to low, cover and simmer for 2 hours. Skim off any foam.
Add the carrot, turnip, swede and parsnip. Simmer for another hour.
Remove the bay leaves and thyme sprigs. Remove the meat, shred it and discard the bones. Return the shredded meat to the pot along with the leek and cabbage. Simmer for another 30 minutes. Add salt to taste. We like this soup on the thick side, almost a stew. If you prefer the soup a bit thinner, add some more broth.
Serve garnished with fresh chopped parsley.

*"Links" and "links course" are terms that refer to a specific style of golf course whose hallmarks include being built on sandy soil along a coastline. Links courses are buffeted by strong winds that require deep bunkers to prevent the sand from blowing away. They are also completely or largely treeless. There are other criteria that specifically define a links course.
All the first golf courses in the sport's history were links courses in Scotland. Great Britain and Ireland are still home to nearly all the true links courses, although links-like courses can be found in other areas, too.
Email Post