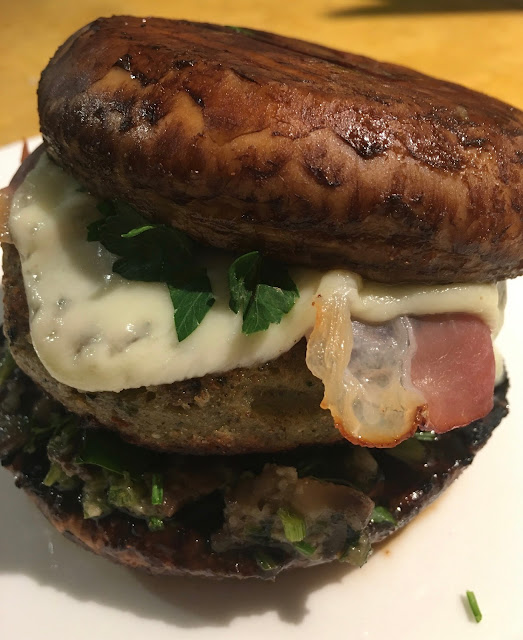 "I’ve had to knock bread on the head". How many times have I heard this plight. While many people are  unable to properly digest gluten, causing them an allergy or intolerance, many people who have no trouble with it are opting for a more gluten free based diet as a result of the many health benefits. A gluten-free diet has been shown to improve digestion, increase energy levels, reducing chronic inflammation and more.
No bread? No problem!There are other options...enter the Portobello mushroom
The other day,standing over a smoking hot grill sipping wine with one hand and flipping Grilled Portobello Mushrooms with the other, it felt as if whatever else happened that day, life was going to be ok.This way with the portobello mushroom is a kind of one size fits all concept.You can make it meaty, veggie, vegan or fine tune it to whatever the mood takes you.
One of the things I love most about portobello mushrooms is their “meaty” factor. I realize that probably sounds a bit odd because after all I am talking about a vegetable, but in kingdom veg, portobello mushrooms are especially fleshy and nutritious, especially when grilled.
Portobello mushrooms dry roasted for 15 minutes are good, but I prefer them grilled which may be messier to eat but gives them a certain succulence and unctuousness. With their concave bottoms they make the perfect vehicle to carry a filling; better than bread, in fact. Beware, though: mushroom selection is all important. I went at first for big, rounded ones. With a burger between the two of them, stalks (obviously) having been removed, it looked magnificent, but I would have needed Spielberg killer jaws to get my mouth around it. With mushrooms of this shape it’s better to carefully cut through it to create two more manageable slices. Or you can just go for bigger, flatter portobellos, which somehow aren’t quite as attractive to look at, but do the sandwich job terribly well.
The key to mushroom bap success is to enhance their flavour with a marinade that plays up the portobellos’ earthy and (to use a phrase that’s both super foodie and super accurate) umami factor.

THE TRICK
To make a delicious base for your burger to rest on....
First of all remove the stalks and set aside on a chopping board.With a small spoon lightly scrape around the underside of the caps to remove the gills.Chop the stalks finely and add the gills that you have scraped off.Add a handful of chopped parsley and two cloves of garlic crushed.Transfer this mixture to a small frying pan.Melt a small mixture of butter and olive oil and gently sauteée until the mixture softens and combines.Set aside.When ready to assemble spread the mixture over the bottom half of the mushroom and then top with your own choice of burger and topping.

*I used Queijo Flamengo - Portugal’s "everyday cheese" used for tosta mistas and sandwiches. Flamengo means Flemish in Portuguese, and has nothing to do with the bird Flamingo. It is a near as damn it copy of the Dutch Edam cheese and the most popular style bought in supermarkets around the country is packaged slices. It can be sold "em barra" - as a block cheese.
Email Post