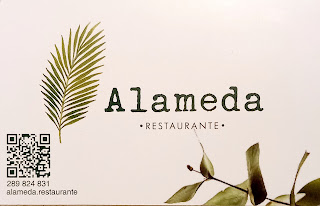 Its taken a while but finally we made it to Rui Esqueira´s acclaimed Restaurante Alameda in Faro the other evening. Oh how Faro has changed. A few years ago I never thought of Faro as the gastronomic hub of the Algarve, but it seems its heading that way. Many chefs it seems are opening projects in Faro.The only reason people came to Faro back in the day was to use the airport. Those who landed in Faro jumped onto various forms of transit and quickly headed to other destinations. Restaurants were coincidental. Times have changed as we witnessed on Saturday night, the adjacent tables to ours were cosmopolitan as well as local. One American couple were actually staying upstairs. Esqueira, as well as having a second restaurant in Faro, Monky, also plays host to a hotel and hostel on the upper floors of the Alameda building. Faro is no longert just a transit point but a destination in itself. People are coming to Faro to eat, not just board a plane .And its hardly surprising while wandering through the pedestrianised centre of Faro we witnessed all manner of interesting new shops opening up.
Its clear to see from his tasting menus, the ambition that already existed and the time he spent as assistant chef in award-winning restaurant Ocean, at Vila Vita Parc, gaining him experience and
confidence to strike out on his own, bold as brass.
What a joy. Imaginative, stylish,  inventive and very clever. A brilliant selection of of tasting menus to suit all palates and pockets.We opted for the Menu Alameda. 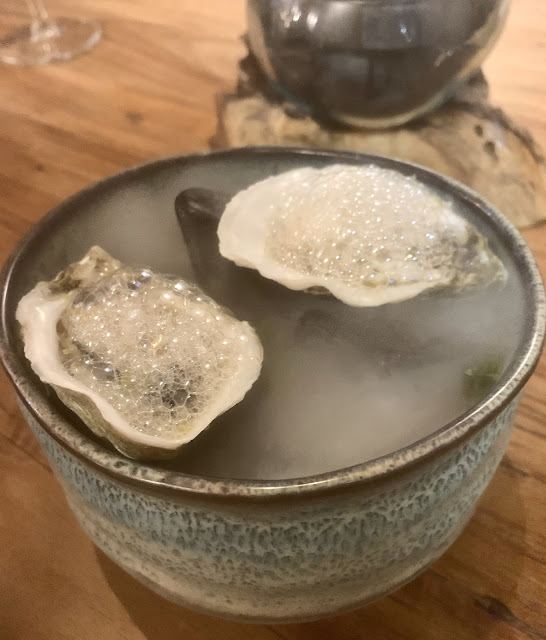 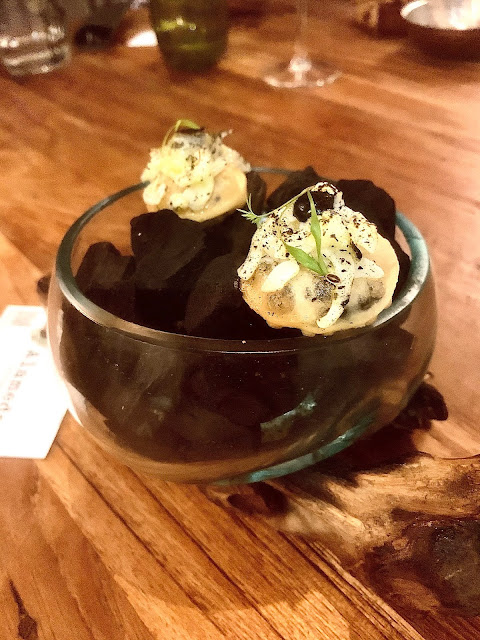 The theatrical opening to the evenings entertainment was Ria Formosa oysters with eucalyptus and Ponzu atop bowls of dry ice  and cuttlefish with ink on a crunchy wafer type biscuit.The third offering was a baby cataplana.The fourth dish ( pictured top ) was Olhao octopus with jalapeno chimichurri and aljezur sweet potato crisps. To our surprise the waiter then announced the meal starts here,everything previously had been the most amazing of bouches. This twist was very clever and logical. The Portuguese meal always starts with bread and butter. We were served some beautiful home made bread two ways wiuth Açorean butter and a peppery local olive oil. Whats not to like there. 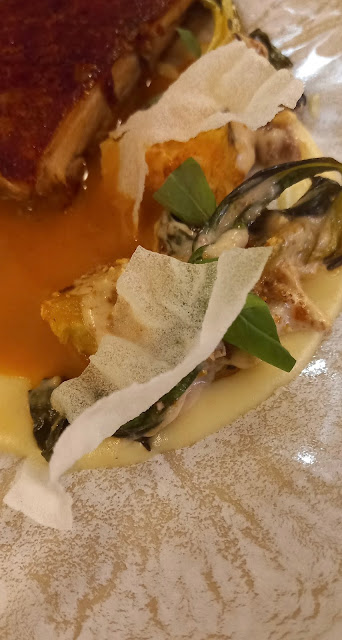 So let the meal begin and the sixth item was the main plate a simple but nevertheless less tasty suckling pig with cabbage, almonds and finished with a kimchi gravy. The menu finished with a sort of deconstructed Moroccan inspired pudding centred around apple, roses,hibiscus and crumble.Interesting flavour combinations but I felt the story slightly missed the mark here.
Our waiter was so attentive and enthusiastic that I could see how it could become irksome to some.
I fully understand how employees are very proud of these clever dishes and want to explain in minute detail about everything you are going to eat, but sometimes the effort is too big and it verges on patronising that they seem to think you have never been in restaurant of this type before and you have to learn how exquisite their food really is. If it seemed a little patronising to our Portuguese companions, it did not spoil our over all enjoyment of the evening. They are a dynamic young team who clearly take great pride in what they do, both in the food and in the service. All the accoutrements to the meal were designed both for the aesthetics of the concept but also with functionality in mind.
I have often been critical of tasting menus in the past but on this occasion i had to eat my judgemental words, because here is a fine and delicate twist on the regional, elevating classic Portuguese dishes using well sourced local ingredients, to produce unusual and delicious well balanced plates of food. We left the restaurant to walk into the hazy December night, satiated and happy with a smile on our faces. With a menu to die for at just under 40 euros a head plus two accompanying bottles of Soalheiro Bio Terramatter who wouldn´t? Next stop Monky 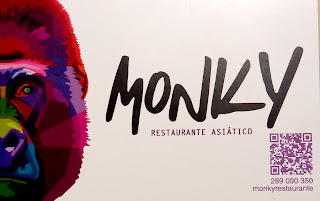