Vintage finger food gets a make over

Do you ever wonder like me what ever happened to certain favourite treats from your childhood?   Who remembers cheese footballs? Well I've been hankering after them for some time now, conjuring up memories of my grandmothers parties. Sadly the demise of these wafers has become not unlike the England football team being a far cry from their golden years of the sixties. 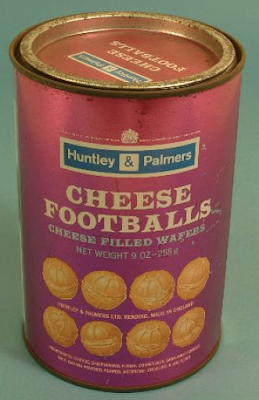 They are no longer the product of the household name Huntley and Palmers and are now packaged in a fancier cardboard tub tub and marketed by KP. These snacks were a genuine Christmas treat in our house back in the day. OK, so if you never tried a Cheese Football think two semi-spherical half-football-shaped wafer outsides with a squishy salty fake cheese filling. It's a completely fake food made of 100% not actually cheese at all. Just delicious! What do they actually taste like? Hard to describe. The outer shell is a sort of wafer which doesn't taste of much, it's just there to hold the cheese in. And to pretend to look like a football I suppose. 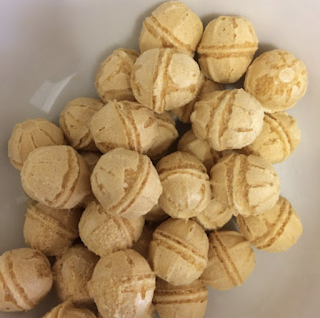 And the inner cheesy bit is a sort of cream-coloured salty cheesy mush. And quite sweet. Sounds horrible doesn't it? And yet... I find them hard to resist. At least once a year.The trick is to bite off one half of wafer shell and eat that, then bite off the second half of the shell so you're left with the squidgy cheesy bit. And then you let that dissolve in your mouth. Or you can just eat them like a normal person would.Any kind of Cheese balls are probably the most delicious retro appetizer at a party, but let’s be honest, like a pineapple hedgehog they usually scream “tacky” and “dated.” I set out to make over this vintage finger food and turn them into the classiest cheese balls ever. Little bite sized balls of fromage rolled in a contemporary topping to create a harmonious symphony of  flavours, like making music to ones taste. Behold these gorgeous no cook appetisers or perhaps canapés. They carry all the flavours of a bagel without a bagel in sight. The classic bagel with cream cheese becomes cream cheese with bagel flavour .To take the concept even further and add some authenticity serve them alongside some smoked salmon. 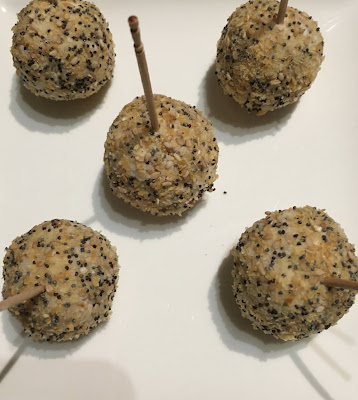 In a medium bowl, crumble the cheese. Use your hands to shape the cheese into a ball. Seal the ball in plastic wrap and chill it in the refrigerator for 15 minutes. Gently roll the cheese ball in the  bagel seasoning until it’s completely coated. Return the ball to the refrigerator until you are ready to serve, then spear with cocktail sticks.