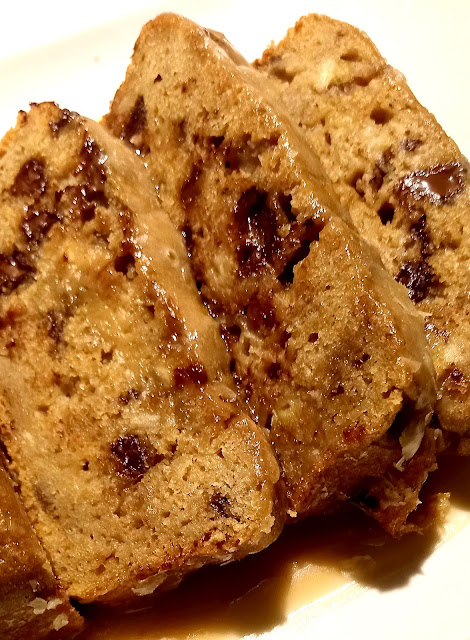 Imagine a bowl of caramel covered bananas with chocolate sprinkles. But in beer form. Or a moist banana bread with melted chocolate chips and a sugar beer icing.Beer banana bread is exactly what it sounds like – a banana bread made with beer. In this case, it is not just any beer, it is Senescal Marshall Porter brewed in Castro Marim. And it is not just an ingredient to the banana bread batter. A decadent beer glaze is in attendance as well. A Marshall Porter glaze that gets soaked up and results in an even moister loaf. In normal circumstances I would use yoghurt or milk both containing fat which changes the whole baking process.The porter has no fat and is much more aqueous so the resulting cake is gorgeously moist like a pudding.

Oh Mr porter...
Porter is a style of beer that was developed in London, England, in the early 18th century. It was well-hopped and dark in appearance owing to the use of brown malt. The name originated from its popularity with street and market porters.
The popularity of porter was significant, and it became the first beer style to be brewed around the world, and production had commenced in Ireland, North America, Sweden, and Russia by the end of the 18th century. Move on to 2021 and here in Castro Marim we have our very own distinctive porter as part of the range from our local Senescal brewery. Marshall porter displays a dark brown colour with a great combination of malted and roasted grains and a little touch of wheat. It’s a full bodied beer with hints of chocolate, which is why i chose it to make my banana bread. My recipe gives leverage to these characteristics, particularly the yeast and the  caramel/chocolate edge.
The brewers tasting notes
"Interesting, I can really taste the beer, but not sure if without the knowledge of the recipe I would be able the tell that there was beer in it. For me there were two contrasting flavours which opened the beer character, the banana sweetness made the roasted malts come through like cooked-nearly-burned sugar (pudding sauce) and the chocolate made the beer bitterness more apparent, like if it was a very strong dark chocolate (over 70% cocoa) but with smoother aftertaste".

Marshall porter banana bread
For a cakier consistency you could increase the flour by about 1/2 cup.

33cl marshall porter, will be used both in the batter and the glaze
2 cups flour
1 tsp baking powder
1 tsp salt
1/2 tsp cinnamon
3/4 cup brown sugar
1/2 stick unsalted butter, melted
2 eggs, beaten
3 ripe, medium sized bananas, peeled and mashed
1/2 cup semi-sweet choc chunks/chips
oil for greasing pan
1 1/2 cup confectioners sugar
Heat your oven to 350ºF.
Line a standard bread loaf pan with parchment paper, grease the bottom and sides with oil. Set aside.
Peel the bananas, place them on a plate and press with a fork until mashed. Set aside.
In a mixing bowl mix the flour with the baking powder, salt and cinnamon.
In a separate bowl beat the eggs, add the brown sugar and the melted butter and 1 cup of the dunkelweizen and whisk them together.
Add the Marshall Porter to the flour mixture and stir to combine well.
Fold in the mashed bananas and the chocolate chunks/chips.
Transfer the batter to the greased pan and bake for 50 minutes. Check after about 45 minutes, oven performances vary.
Once the bread is out of the oven, let if cool off a little and holding by the edges of the parchment paper remove it from the pan and place it on a cooling rack on top of a baking sheet.
Immediately prepare the glaze. In a measuring cup with a spout or a small mixing bowl with a spout, whisk together the confectioners sugar with 1 tbsp of Marshall Porter. Keep adding little by little and whisking until you are satisfied with the consistency of the glaze.
While the banana bread is still warm, gently remove the parchment paper from underneath it. Drizzle it with the glaze and let it absorb it. You can then transfer it with the cooling rack onto another baking sheet and drizzle it again with the glaze drippings from the first drizzle. Let it absorb the glaze and cool off and carefully slice. Enjoy!
Email Post