How could you not love a latke, the perfect fried potato pancake? What you pair it up with is up to you, it might be with bacon, or with a fried egg astride it, smoked salmon or just simply a garnish of some creme fraiche and chives. What everyone does not love however is the way they make your kitchen, clothing, and everything else smell of frying for a week after the event. There are ways to mitigate this (open all the windows, set up fans, burn Jo Malone scented candles, diffusers, White company aromatizers, home sprays ), but none are particularly effective or easy to manage while handling a pan of hot oil. The most natural solution is of course to bake them in the oven. Perhaps very obviously, the absence of frying oil in baked latkes prevents your house from smelling like a deep-fryer, though it also means the latkes lack what makes them so flavoursome and crisp. Case in point: To make potatoes taste really good, and, just as importantly, to make latkes crispy, you have to use oil, and quite a bit of it. Setting out to make an actually good baked latke might as well have been called Mission: Impossible. 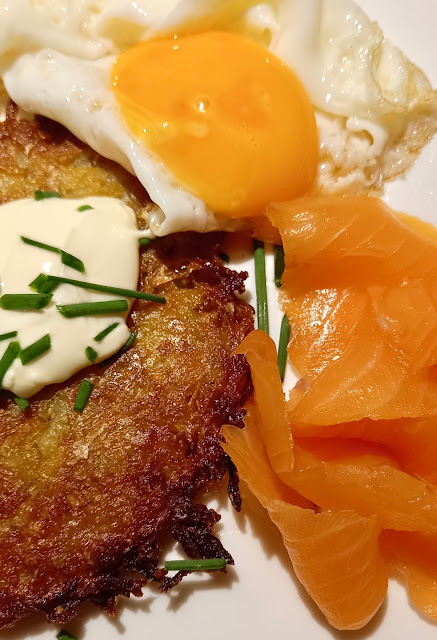 There is a way however to combine the two. The key to deeply flavoursome, crispy-exterior, tender-interior baked latkes is essentially to oven-fry the pancakes. "Oven fry i´ve never heard of that" I hear you say well neither had I until I read a tip from Brooklyn-based food writer and recipe developer Rebecca Firkser whose recipe this is. Though the ¾ cup of sunflower oil (or a very neutral cooking oil) is in fact much less fat than one would use to fry latkes on the stove, the decent slick paired with ambient heat of the oven—you’ll heat the oil in the sheet pan just before baking—makes for some of the most deliciously crisp latkes I’ve ever had. Even better, when you bake latkes, you can make at least 8 medium-sized latkes or 16 baby latkes at a time—significantly more than one frying pan can handle, so cleanup is as easy as washing a sheet pan (very).

3/4 cup sunflower, peanut or vegetable oil, plus more as needed
3 medium russet potatoes (1½ to 2 pounds), scrubbed
1 large yellow onion, peeled and halved
1 large egg
2 tablespoons dry bread crumbs, or all-purpose flour
Flor de sal and freshly ground black pepper
Flaky crystals of Flor de sal
Heat the oven to 425°F and pour a generous ½ cup of the oil on a sheet pan.
Use a box grater or a food processor fitted with the coarse grater attachment to grate the potatoes and onion.
Transfer the mixture to a clean kitchen towel and place over a large bowl. Gather the edges of the towel and squeeze out as much liquid as you possibly can from the onions and potatoes. Let the mixture sit for 10 minutes after you think you’ve squeezed it all, then squeeze again—there’s always more water. Keep the potato mixture in the towel for a moment. Let the liquid sit in the bowl for 5 minutes, then gently dump out the water from the bowl, but make sure to leave any milky white potato starch that’s accumulated in the bottom of the bowl.
Place the oiled sheet pan in the oven and set a timer for 10 minutes. Transfer the potato mixture from the towel to the bowl with the potato starch along with the egg, breadcrumbs or flour, 1 teaspoon flor de sal, and lots of black pepper. Mix with your hands until totally combined.
Carefully remove the sheet pan from the oven. Scoop 8 lightly packed ¼-cup-sized mounds of the latke batter into your hand, then very firmly flatten between your hands.  Transfer to the sheet pan, then use a fish or offset spatula to flatten each mound as thin as you can. Bake for 20 to 25 minutes until deeply golden brown on the bottom and edges of the latkes.
Remove the pan from the oven and flip the latkes, pressing down on the pancakes and letting any excess oil pool around the pan, then bake for an additional 10 to 15 minutes, until deeply golden brown on both sides. Transfer the latkes to a paper-towel-lined plate and sprinkle with flaky salt. Let sit for 5 minutes, then transfer to a serving plate. Add another ¼ cup or so of oil to replace what was soaked up by the first batch, transfer to the oven for 10 minutes to warm the oil, then form and bake the remaining latkes while you eat the first round. 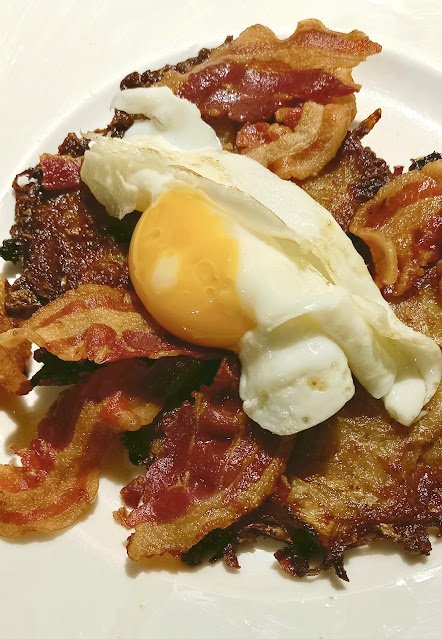