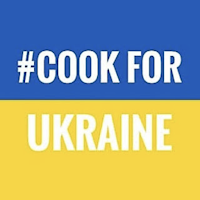 Everyone should know how to make vinaigrette, but not everyone would know how to make vinegret. Vinaigrette is not there just to make your spring mix palatable. It's the fairy godmother of the condiment world. It can grant whatever acidic wish any dish desires.Until recently I never thought of vinaigrette as anything other than what I dressed my salad with .After 10 weeks of cookery school I now know to the contrary. Vinaigrette is much more than just a salad dressing, it manifests itself in many guises and here are but just a few examples of its diversity.
Brown butter vinaigrette
Meat vinaigrette. The fat in cured meats is just as good as butter as a vinaigrette extra. ...
Fruit vinaigrette. ..orange,mango,tomato,avocado,rasberries,blackberries.......
Jar of almost-empty whatever vinaigrette. ...mustard,tahini,balsamic......
Steak sauce. ...
Potato salad. ... Noodle salad. ...
Sandwiches.......
Vinaigrette is a cold emulsified sauce made of red wine or white wine vinegar ( and /or sometimes citrus juice), salt, pepper and oil, often flavoured with herbs, spices, and other ingredients.
There are many ways to prepare Vinaigrette but a basic recipe is to slowly add 3 parts of oil at room temperature to 1 part of seasoned (salt and pepper) vinegar until it emulsifies into a smooth sauce. Herbs are sometimes added to enhance flavour.Sugar can be added to counteract acidity
The addition of a small amount of mustard can help keep the oil and acid in an emulsion.
Vinaigrettes, also called French dressing, are used as sauces and as salad dressings. This is the most common use of the word..
Other popular Vinaigrettes in French cuisine include anchovies, lemons, truffles and raspberries
Brown butter vinaigrette
That's right, it doesn't have to be olive oil. Well, there's olive oil in this brown butter vinaigrette recipe too, but for heartier fare like a grilled cauliflower, carrot and potato salad where you might want butter anyway, now it's vinaigrette butter.
Meat vinaigrette
The fat in cured meats is just as good as butter as a vinaigrette extra. I rendered some fat from gunwale, then whisked it into a dressing for a Brussels sprout salad that basically won me over.
Fruit vinaigrette
Vinegar melts ripe fruit, this is a fact. When ripe fruit melts into vinegar, you get a condiment that's good on everything from roasted or grilled meat to fish back to more fruit. Simply mash whatever ratios of vinegar to fruit make you most comfortable with a fork, then strain and whisk with olive oil.
Jar of almost-empty whatever vinaigrette
Half a teaspoon of marmalade left in the jar? Vinaigrette for spinach salad. The last vestiges of mustard you couldn't scrape out with a spoon. Drizzle on boring chicken. Just pour a little vinegar and olive oil into the jar with whatever else (ground pepper and fresh herbs work nicely) shake vigorously and dispense. 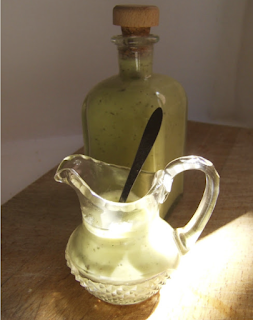 My vinaigrette
Makes: 1 cup dressing
(this will leave you with plenty to jar up and store in the refrigerator)
Juice of one lemon
300ml extra virgin olive oil
125ml white wine vinegar
1 tablespoon Dijon mustard
1 teaspoon Flor de sal
1/4 teaspoon finely ground black pepper
1 clove garlic
generous sprinkling of Herbes de provence
Salt and pepper, to taste
Make the vinaigrette by placing all the ingredients in a food processor until well emulsified.
To confuse you further, in the Eastern European kitchen , Vinaigrette is not a sauce. An autumn and winter staple in every Russian and Ukrainian household is a dish called Vinegret, better known by the name Salat Vinegret (pictured top ). It is made with cooked, finely chopped vegetables (potatoes, carrots, beets) and sauerkraut (shredded and fermented cabbage) with oil and salt. Undoubtedly the name is derived from the French ‘vinaigrette’ due to the sharp and tangy taste this salad delivers. It’s absolutely delicious and makes a great weekday lunch. Truth is this salad is great in any season but since it heavily relies on preserved vegetables like pickles and root vegetables, it’s eaten more often in cold months.  It’s only fair that we eat fresh vegetables in the summer and cooked root vegetables and preserves now. If you don’t like the taste of raw onions, you can saute them first, which will take the edge off the raw onion and add another layer of flavour to this salad.
For those of you, who favour all things creamy, this salad can be made using mayonnaise as a dressing.Green peas are traditionally added to this salad as well. Versions vary from household to household and each can be great. Tweaks that evolve over time put an imprint on a  recipe.I tweaked the recipe influenced by an old trick my mother applied to her beetroot soup ( which incidentally she called borscht,now having learnt what a true borsch is,hers was so not.)  and borrowed from another Ukrainian recipe so two recipes became one.
My influence was a dish called Kholodets, a well known meat dish in Ukraine using aspic.Kholodets is one of the Ukrainians` favourite cold dishes and one of foreign visitors most "please avoid it" foods. Traditionally,a day or two before an event a husband or wife goes to the market,chooses the best pork leg ,cleans it and washes it at home, and boils it for several hours ( 6-8).Simply put it´s a cold broth, jellied due to the bones and cartilage. To make my dish vegetarian and also to save time i used agar agar. If you are not vegetarian, regular gelatine works better. I think the gelatine adds another dimension of texture to the vinegret. 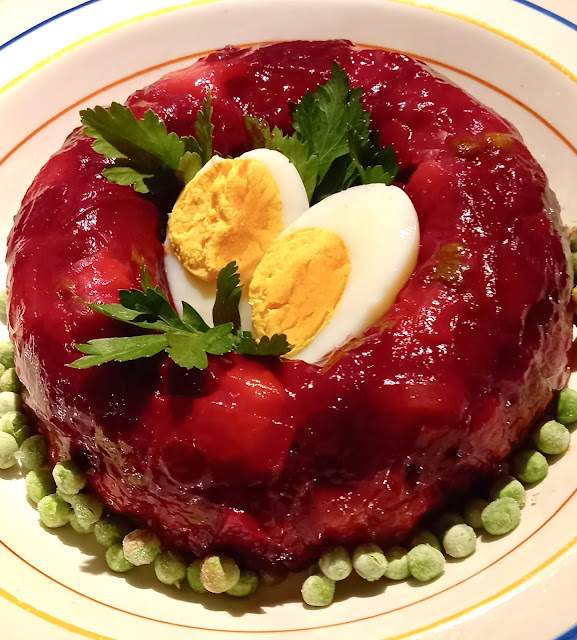 2 large beets
3 potatoes
3 large kosher dill pickles
1/2 cup red kidney beans (optional)
1 carrot
1 onion
1/3 cup just blanched peas
1 1/2 tsp salt
1/2 tsp ground black pepper
1/4 cup sunflower oil
5 leaves of gelatine
Place beets, carrot, and potatoes into a large pot; cover with water and bring to a boil. Once boiled simmer over medium heat until tender. (I boiled my potatoes and carrot for about 45 min then the beets for an additional 15 min.) When vegetables are tender remove from the water and set aside to cool.Reserve the cooking liquid.Put your gelatine leaves in cold water to soften for five minutes then squeeze ot all the water and add to 500ml of the cooking liquid.
Meanwhile dice the pickles, onion, and drain and rinse the beans,if using; place into a large bowl.
When the beets, potatoes, and carrot are cool enough to handle, chop into small cubes; add to the pickle mixture.Add peas and beans if using. Add the salt, pepper, oil and gelatine.Toss everything together making sure the gelatine is completely integrated. Refrigerate at least a few hours for flavors to set. The longer the beet salad marinates the darker it gets from the beets.

Are you cooking for Ukraine?,thinking about it? or would make donation?