green tomatoes at the.... 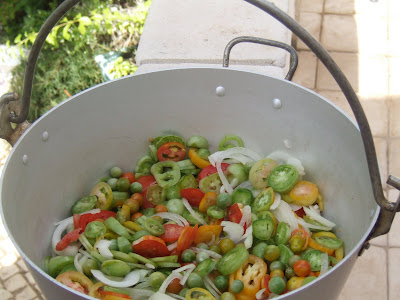 Fried green tomatoes inspired Fannie Flagg to write her classic 1987 novel, Fried Green Tomatoes at the Whistle Stop Cafe. `Daredevilish tomboy Idgie and her friend Ruth served up fried green tomatoes with a good barbecue, good coffee and all kinds of love and laughter, even an occasional murder.....Our kitchen can serve up all of those, bar the occasional, god help us, murder!!!!
At this time of year, as summer draws to a close, the tomatoes are slowing up in their ripening process, and are ready to hit the preserving pan, to provide an ever popular breakfast jam, a slightly more unusual relish and of courseour own fried green tomatoes.

1. Cut the oranges into slices and remove the pips.
Squeeze the juice from the lemons and reserve the pips.
Tie all the pips into a piece of muslin.
2. Put the tomatoes and oranges through the food processor
until they are finely chopped.
3. Place the chopped tomato and orange in a preserving pan with the water and muslin bag. Bring to the boil,then reduce the heat and simmer for about 45 minutes, or until the orange peel is soft.
4. Add the sugar and the lemon juice to the pan, stirring
until the sugar has dissolved.
5. Bring to the boil and boil over a medium heat,stirring occasionally, for 30-35 minutes, or until it is thick enough for a wooden spoon drawn through the centre to leave a clear channel.
6. Remove the pan from the heat and leave the jam to settle for a few minutes. Skim if necessary, then remove the muslin bag and stir in the crushed coriander seeds. Ladle the jam into sterilized jars and seal.

Thinly slice the tomatoes and onions, then put all the ingredients except the cornflour
into a preserving pan.Bring to the boil, then lower the heat and cook, uncovered,
for 1 1/4 hours. Mix the cornflour to a cream with a little water. Remove a ladleful
of hot liquid from the pot and add to the cornflour cream.Stir, then quickly return
the mixture to the pot, giving it a good stir so that the liquid thickens evenly.
Cook for 15 minutes, then spoon into hot sterilised jars and seal at once.
Store in a cool dark place for up to 1 year.

Casa Rosada´s fried green tomatoes
Dip thickly sliced green tomatoes into lightly whisked egg and then polenta.
Fry in olive oil until golden and crunchy.Great with anchovies or as an accompaniment
to barbecued meats or sausages and bacon at breakfast. Yum.